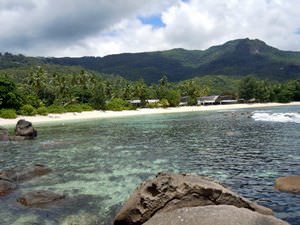 People of Seychelles have quite peculiar traditions concerning dealing with money. I might be a little frustrated as you’ll get a change with a small colourful clump on a market for the first time. But it’s completely ok. The local currency which locals also use is being produced from non-tearable plastic paper. Market-sellers have transparent packets with ball-formed bank notes in it instead of cash boxes. Besides, you don’t have to straighten your money, you can simply give it just like that. But remember that almost nobody accepts cards here. You can only use it in hotels.
Best beaches and recreation areas around Mahe Island
There are more than 60 beaches on the island, and nearly all of them differ with modern equipment and rental centers. The largest and the most popular beach of the island is Beau Vallon, …

Open
It’s better to exchange currency as soon as you come here. In case you’re run out of local money, you can pay dollars without any problems. Why dollars? Well, the answer is pretty simple – locals are somehow sure that euro is cheaper (or of the same value) than dollar. So, if you ask to recalculate currency, even then it should come so that American currency is a much better option.
Even though there are no siestas, most stores have time off from 12 p.m. to 1 p.m. That is why it’s recommended not to plan shopping at this time period.

You can see young guys all around the island, especially in the city beaches area, who sell local coconuts. Usually, not highly ambitious ones with different drug problems do it, they just pick old coconuts from the ground and sell it to tourists. It’s up to you to decide whether you need it or not. However, if you’re looking for a nice unusual coconut with a peculiar shape, then it’s young ones. It’s better not to buy it from hands, even though it would be rather cheaper than in supermarkets. The explanation is simple – you won’t be allowed to bring it home from the island without special permission and, as a result, you’re likely to get a fine. Copyright www.orangesmile.com
Top hotels in Mahe Island for business trip or short vacation
Mahe Island has a decent selection of exclusive accommodation places; every hotel tries to surprise guests with its original services. Hilton Seychelles Northolme is situated on the rocky …

Open
If a whole coconut with all the essential documents is a too expensive purchase for you, then you can look for hand-made stuff from its shell. They look really cute and, furthermore, are cheap. Or you can buy yourself a bottle of coconut liquor. It’s one of the main ingredients for the majority of local cocktail recipes. 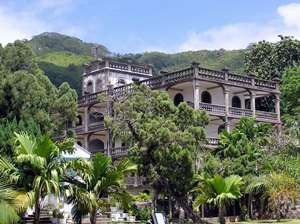 In case you actually want to buy something really special, then spend one day visiting a trade village which is not far from Victoria. You can get there by bus, a rental car or a bicycle. You can see how a master creates a marvellous jewellery box from two coconut halves or braid baskets from leaves. Moreover, you can also buy a straw hat or a beautiful coral craft there.
Guide to Mahe Island sightseeing - things to see and to visit
Mahe Island is the largest and most visited of the Seychelles; fans of various activities enjoy spending time there. Dozens of luxury resorts, beaches with pristine beauty and impenetrable …

Open
Sometimes tourists are offered to buy a souvenir made of a turtle shell. Do not buy it if you don’t have any particular knowledge concerning these animals. For instance, if you buy such a purchase and then it appears that it was made from hawksbill endangered species, you might be sent to prison. Just buy yourself a hand-painted plate with turtles on it, there is a great variety of pottery. 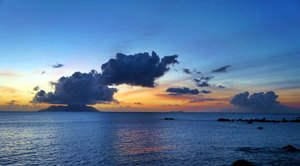 One of the most popular mementos here are so-called «magic bottles» – bottles made from multi-coloured glass and filled with colourful sand. One more creative gift from the island is real shark jaws. Then, some tourists also buy local flowers. In addition, local species, especially vanilla beans that you could use for several years, are highly popular too. Tourists also often buy rum and vanilla tea. Or you can, for example, buy a galleon model as a reminding of privateers who used to rule the island.
Family holidays with kids in Mahe Island. How to entertain your child, things to show to children.
Active and inquisitive children who are always ready for another adventure should definitely like Mahe Island. There are not many entertainments for kids even in the capital city Victoria. A …

Open
Local fruit is definitely worth trying. Buy not in shops but on markets where variety is wider and you would also have a chance to bargain, despite the fact that local sellers low their high prices only on rare occasions. 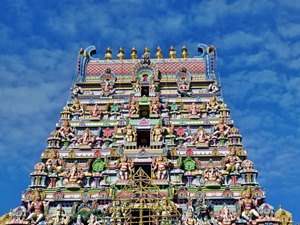 The best option to immerse yourself into the atmosphere of a night fair is to visit food fest in Beau Vallon. Food, jewellery and souvenir traders as well as youths and those who just want to have fun and dance around fire come there in evenings. By the way, you can also buy traditional local clothes and jewellery (precious and non) in national style right there from craftsmen who created it themselves.

This guide to shopping in Mahe Island is protected by the copyright law. You can re-publish this content with mandatory attribution: direct and active hyperlink to www.orangesmile.com.
Mahe Island - guide chapters 1 2 3 4 5 6 7 8 9 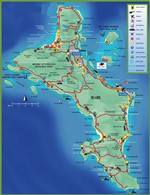 Shopping advices for the whole region around Mahe Island

Victoria
The largest souvenir shop in Victoria is called Camion Hall. It presents both traditional souvenirs, which can be purchased here at the most attractive price, as well as exclusive works of art by famous local artists. The capital boasts of several attractive markets, including Sir Selwyn Clarke Market that occupies a beautiful Chinese-style building. Popular regional products ... Open »
Grand Baie
Grand Baie Bazar is a colorful market, located in the very heart of the resort. It is the most popular and interesting place for shopping. The main part of its retail space is occupied by pavilions with clothes and souvenirs. This market attracts many tourists with affordable prices. New clothes are really available here at the lowest price, however, the quality of goods should ... Open »
Zanzibar Island
Be sure to buy local coffee. The largest coffee plantations are located in Tanzania. Therefore, both the grain and ground version of the drink is inexpensive here. You can find the most affordable prices on the market in Stone Town. Wooden masks are the most popular African souvenirs. Often tourists buy them to hang on the wall. Many people buy carved figurines made of ... Open »
Antananarivo
Many unusual shops work in Antananarivo. One of the most attractive is Lisy Art Gallery - Souvenirs. This store sells nice handmade crafts. You can choose colourful woven baskets and bags, cute tiny boxes and decorations for your house. High-quality leather products and essential oils are also on offer. Ladies can enjoy themselves with excellent locally produced cosmetics. ... Open »
Maldives Island
Maldives offer a wide range of opportunities for those who love shopping. Here you can find interesting souvenirs, stylish things and much more. You should better buy everything you need in the capital's shops-in the resorts the choice is small and the prices are much higher. The best places for daily shopping are supermarkets people's choice on Orchid Magu or Fantasy on Farad ... Open »
Male Atoll
North Male Atoll is probably the only place on the Maldives where you can actually do shopping in its true sense. There are almost no stores on «holiday islands», however, Malé – the capital – is perfect for people walking around shops looking for peculiar souvenirs, clothes, etc. So, do like the local population and go shopping in the night time when it’s already not ... Open »

Shopping advices for Mahe Island. The best spots for buying designer clothes and local delicacies from Seychelles - shops, galleries, boutiques and outlets. We provide you with the shopping streets map, so you can plan your efficient shopping routes, while hunting for authentic souvenirs, goods, drinks, shoes and clothes in Mahe Island.