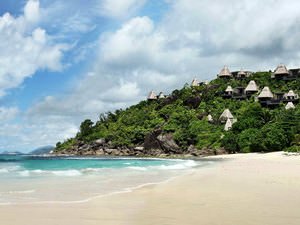 The archipelago simply amazes visitors with its stunning nature - it's a true piece of paradise. Every island here is a beautiful and unique place, so travelers are recommended not only to enjoy beach rest, but also get acquainted with the history and culture of local people.
State construction and political life of Seychelles
Seychelles has a republican administrative structure. The state structure is a democratic presidential republic. The capital of the State is the city …
Read further
Mahe Island is considered the economic and political center of the Seychelles. Travelers will find much entertainment in Victoria, the capital of the country. Besides numerous galleries, exhibitions and museums there are several interesting architectural landmarks in the city. The main street of Victoria, Market Street, is the location of such sights as the Cathedral of Immaculate Conception and the Victoria Clocktower. All buildings here were constructed in the beginning of the 20th century and are of a great historic and architectural importance. Visitors are also always welcome in the Museum of Natural History, the Victoria National Museum of History and the Botanic Garden. One more peculiar fact about Market Street - this is the only street in the country that has traffic lights. Car traffic is almost non-existent in other streets, so there is no need in traffic lights there.
There are several interesting places in Victoria suburbs, for example, the village of Craftsmen, where travelers can purchase memorable souvenirs and get acquainted with lifestyle of local people. There are several large nature reserves and parks not far away from that capital, such as the Royal Garden, the National Marine Park and Morne Blanc piedmont region. When describing nature attractions of the islands, it's simply impossible to fail to mention Silhouette Island. This island is famous for its magnificent equatorial forest - the largest and richest forest in the country. Despite that fact that this island is not very populated, it has everything needed for great rest. Copyright www.orangesmile.com
The soul of Seychelles - religions and languages
The Seychelles has only one official language – Creole. Many also note that in this case we are not talking about the classical Creole, but about …
Read further
Praslin Island is a wonderful piece of nature, where tourists can walk in spacious parks and see various exotic birds. Vallée de Mai Nature Reserve ("May Valley") is known as one of the most beautiful parks in the country. There are more than 7,000 palm trees and breadfruit trees, and many rare species of parrots in the park. You will also find several fishing centers, restaurants and entertainment complexes on the island. La Digue Island is considered the most charming island of the archipelago. Here travelers can enjoy private rest in secluded bays, walks in picturesque groves and fields. The island has become very popular with fans of scuba diving as water is very clean here and visual range reaches 20 metres. Continue your travel by visiting such islands as Cousine, Bird and Denis, which are perfect for fishing, diving and excursions to nature landmarks. 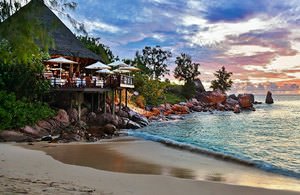 The discoverer of the archipelago is Vasco da Gama. In 1502, he was first to sail near these islands and call them the Admiralty Islands. However, in the course of multiple archeological researches, it was found out that the first people visiting the archipelago were Arab navigators in the 9-10th centuries. Burials of this period were found on the island of Silhouette. On the Fregate Island, you can see thousand-year rock drawings. In the 10th century, it was absolutely deserted. Only pirates visited it at that time,
Seychelles economy - strengths, wealth and problems
The economy of the Seychelles continues to develop rapidly after seceding from British citizenship. The basis of the republic’s economy is tourism …
Read further
The first people who managed to board the archipelago were English navigators. This significant event took place in 1609. English discoverers did not try to colonize islands. The first settlements were established by Frenchmen in 1756. The French colonizers used fertile lands for cultivating cloves, cinnamon and vanilla. Seychelles was also large slave trade centers. In 1814, the archipelago was under Great Britain. At the beginning of the 20th century, people from the Arabian Peninsula started to move to the islands. Seychelles has become completely independent of Great Britain relatively recently, in 1976. 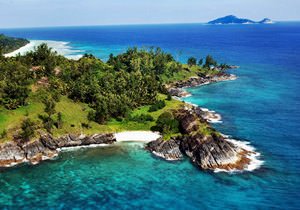 Every year on 29 June, local residents celebrate the Independence Day. Lush national festivities are organized on this important public holiday. The first summer month is especially rich in symbolic public holidays, so fans of event tourism should visit the islands exactly at this time. They can witness festive parades, flower exhibitions and music concerts. In the capital, there are the most fascinating and most interesting entertainments.
Best visiting periods - the climate of Seychelles
Seychelles is truly a paradise in the world, where you can enjoy excellent weather all year round. However, there can be slight changes between …
Read further
Besides amazing beaches, Seychelles attracts tourists with excellent conditions for diving. One of the most interesting places for diving is Ennerdale Rocks. Its main attraction is an old English tanker. It has lain at a depth of 30 m and became home to many sea animals. Near it, you can always see eels, barracudas, groupers and other rare sea animals. Seychelles is the perfect place for romantic recreation. Special marriage ceremonies are organized here.

This article about iconic landmarks and sights of Seychelles is protected by the copyright law. You can re-use the content, but only under the condition of placement of an active link to www.orangesmile.com.
Seychelles guide chapters 1 2 3 4 5 6

Famous and uniques places in Seychelles from our review series 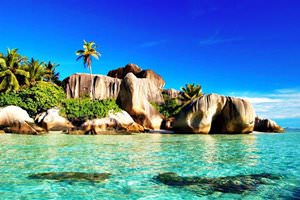 The beach with a complicated name Anse Source d'Argent is located in the fabulously beautiful island of La Digue, which is part of the Seychelles archipelago. The beach is covered with white sand, through which the water off the coast seems of intense azure hue. The thickets of palm trees and other exotic plants approaching close to the coast make the scenery even more attractive. The main feature of one of the most picturesque beaches in the world are huge boulders, which can be seen at the coast and in the water.

Due to complex structure of the coast, a lot of cozy coves were formed here. Anse Source d'Argent Beach is considered an ideal place for a romantic getaway. Fans of diving also love to visit these places, as many exotic inhabitants can be seen in the coastal waters. In … Read all 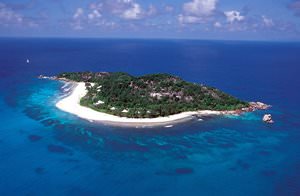 The Seychelles have been a synonym for natural splendor for a long time. To the archipelago belongs the tiny cousin island, which is considered one of the most beautiful in the world. The area of ​​the granite island, whose central part is covered with the lush tropical scrubs, forms about 27 hectares. Cousine is a unique health resort, on whose territory there is no construction or infrastructure. The tourists, the picturesque uninhabited island to visit, should observe some strict rules. 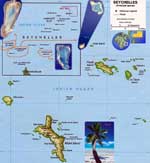 Sightseeing in popular cities of Seychelles

Victoria
The island has preserved several ancient religious sites, and the Anglican Church with its unique original decoration deserves special attention. This church is also remarkable for the fact that next to it there is a crossroad with the only traffic light in Seychelles. Other prominent religious sites include St. Paul's Cathedral, as well as the Cathedral of the Immaculate Conception, where you can see beautiful religious artifacts. Francis Rachel Street is considered the beginning of the … Read more

Mahe Island
Grand Anse is, without a doubt, one of the most picturesque beaches of the island, but that is not the only advantage of that place. There is a horse riding center not far from the beach. The center works every day, offering horse riding lessons to visitors. There are several beautiful uninhabited islands close to Mahe Island, and it is easy to reach them in a moat boat. Many visit these islands to relax on gorgeous wild beaches. These islands are also suitable for hiking and exploring exotic … Read more