National traditions of Macedonia. Habits, mentality and the way of living 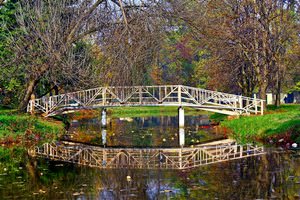 Macedonians – a fairly young nation, whose modern generation are descendants of ancient Macedonians and southern Slavs. The complex history of the country coupled with her long struggle for independence, led to the rise of a widespread patriotic attitude. Today’s residents of Macedonia speak about their country with great pride, so much so that any mention of the country in the foreign media causes a wave of enthusiasm. Everyone, from the young to the elderly, is sensitive to their own traditions. Each house has a national flag and national clothes. Everything in Macedonia; cuisine, music, football – is considered the best. Despite the fact that Macedonians are politically active citizens and are always aware of the policy pursued by all ministers, it is better when engaged in conversation with them, to avoid discussing serious political issues (such as her relations with Greece, among others).
When and where to 'hang out' in Macedonia - festivals and celebrations
Macedonia is one of the most mysterious European countries. Everyone who comes here discovers amazing natural treasures and the ruins of ancient …
Read further
The inhabitants of Macedonia are famous for the love they display for their work, most especially their agricultural work. Today, a large part of the country’s population still prefers the countryside for their permanent residence. Macedonians are sociable and friendly people. Locals usually behave openly, and also often pester foreigners with questions or proudly offer to show them their home or city. A large percentage of the country’s population is composed of men. Girls enjoy enormous popularity and often have several admirers at any given time. Women marry early, while the men mostly marry after the age of thirty or remain single. In Macedonia, the so-called “marriage tours” to neighboring countries are popular. The purpose of such tours is to search for a life partner.
Macedonians are proud of the existing equality among the both sexes in the country, which is actually prevalent, except in the capital. In small towns however, patriarchy still prevails. Women there rarely build a career, preferring to rather stay at home, take care of their children, and gossip at a neighbor’s home over a cup of coffee. Men in Macedonia are very reserved when it comes to drinking alcohol, and do not like to resolve conflicts by violent means. When a male child is born into a family, this event is met with great approval by relatives. On the other hand, people are less excited at the birth of a female child. Little boys are well groomed and are not denied anything. However, today this trend is increasingly perceived as a relic of the past. Copyright www.orangesmile.com
Macedonia sightseeing - top places to visit
The country of rich history that has kept many antique and medieval sights, Macedonia is famous not only as an international centre of history and …
Read further
It is not easy to find a good job in Macedonia. Nowadays, there is a government program aimed at supporting entrepreneurs, thus creating job opportunities. One of the prestigious professions is considered to be a job in the police force, where only those who have completed their studies with the highest scores and have the best indicators of physical training are accepted. Macedonians respect the police, and this can be understood: the crime rate in the country is very minimal (almost zero). Crimes are only mostly known to occur in the Albanian neighborhoods. Many people do not even lock their car when they leave it. Residents of the country like to relax more than they like to work. The working day starts at eight in the morning and ends at four in the afternoon. Only shops and catering establishments are open until late. After work, everyone proceeds to have dinner at home or at a restaurant. 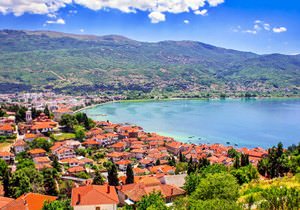 Macedonians dress up quite simply, preferring comfortable clothes – for example, jeans. You will come across people dressed in the latest fashion once in a blue moon, usually in the capital, where all the boutiques of famous brands are located. The residents of Macedonia are quite indifferent to reading and going to the cinema; hence there are very few cinemas in the country. Women like to be engaged in needlework: crocheting, embroidery, etc. Men on the other hand, are passionate football fans. Other types of sports are also popular. When the Macedonian team wins a match, people gather in the squares of cities and celebrate the victory until the early hours of the morning. Within the circle of relatives and friends, it is customary to take an interest in the latest events from the sports world and to discuss them.
National cuisine of Macedonia - specialties, recipes and restaurants
Macedonia’s cuisine has evolved over the past centuries under the influence of the culinary traditions of neighboring countries. However, in spite …
Read further
Macedonians are one of the most musical nations. Macedonian music is divided into pop music, folk pop music and children’s pop music. Folk pop music is very melodic and patriotic. Children’s ethno-pop music is an entire subculture with its idols and festivals. In the country in general, people like different kinds of festivals. One of the most famous festivals is the Summer Festival in Ohrid, which attracts artists from all over the world. The traditional characteristic of the Macedonian festivities is the national dance “teskoto”. It is performed by men to the music of bagpipes and Tapan. It is conducted in a special pace, which gradually shifts from slow to fast, and symbolizes the awakening of national identity. Another folk dance is “Oro”. It is a round dance characterized by a difference in complexity and rhythmic movements of the feet. According to an ancient custom, Macedonians often dance on tables, and by their judgment, this is not considered indecent.

This article about national traditions in Macedonia is protected by the copyright law. You can re-use the content, but only under the condition of placement of an active link to www.orangesmile.com.
Macedonia guide chapters 1 2 3 4 5 6 7 8 9

Castles of Macedonia
♥   Castle 'Samuil’s Fortress' . On the map

♥   Castle 'Treskavec Fortress' . On the map 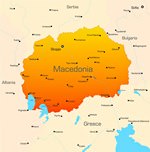 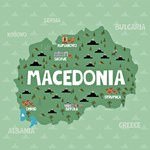 Famous sites of Macedonia in pictures