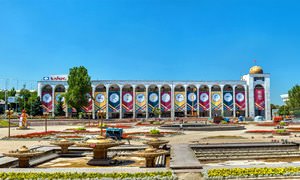 Kyrgyzstan is a country that unleashes the beauty of Asia. It offers a broad range of recreational activities. In Kyrgyzstan, tourists will find excellent ski resorts, beaches, and spa resorts with healing mineral springs. It is home to unique landmarks of the Genghis Khan period, and the beauty of the Tian Shan Mountains has conquered the hearts of thousands of visitors. Do you want to relax in a tranquil place and forget about all troubles? Kyrgyzstan can offer modern and comfortable hotels, national cuisine restaurants serving delicious pilaf and meat dishes, and colorful bazaars with handmade carpets and souvenirs.
First settlements on the site of modern Kyrgyzstan appeared yet during the Palaeolithic period. Archaeologists discovered signs of ancient humans in local caves. For centuries, Scythian tribes inhabited this area. Later, the territory of modern Kyrgyzstan attracted the Usui, Sassanid, and Hephthalites. Early Middle Ages completely changed the traditional lifestyle of the region. The invasion of Turcoman tribes destroyed almost all indigenous tribes.
In the 13th century, the Qara Khitai Empire was situated on the site of modern Kyrgyzstan. Later, the Mongols conquered it. The further history of the country is tightly connected with continuous wars and migrations. The Dzungar Khanate set up its reign over the territory in the mid-18th century. This khanate existed only several years until the Great Qing destroyed it. The Russian Empire took over a part of the feudal country’s territory in the middle of the 19th century. After the revolution, this territory got an autonomous status. Kyrgyzstan was a part of USSR until 1991, later turning into an independent country. Copyright www.orangesmile.com
Gorgeous Issyk-Kul Lake is one of the main symbols of the country. The area near the lake is one of the most popular tourist regions in Kyrgyzstan. This lake has crystal clear water, and comfortable climate has made it an ideal destination for beach recreation. Visitors can swim, sunbathe or try various activities, such as fishing and renting a boat and enjoying a slow ride, during which they can admire the beauty of the area from water. Water in Issyk-Kul is enriched with rare minerals and has healing properties. 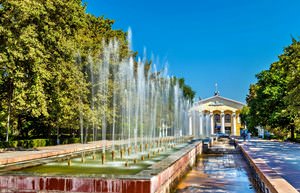 If you like nature, don’t forget to visit the gorgeous Tian Shan Mountains. Jengish Chokusu is the highest peak of the mountains. Its height exceeds 7,000 meters. The surrounding regions have strikingly different terrains. There are lifeless deserts and spacious green fields. The mountain region is also famous for its multiple rivers and lakes. In warmer months, there are many excursions to different areas of the mountain region.
Arslanbob is a popular resort in the mountain part of the country. A small village has existed on this site for centuries. Nowadays, this is a modern resort with well-developed infrastructure and unique natural landmarks that remain its biggest treasure. Arslanbob is primarily famous for an old walnut forest, waterfalls hidden in the mountains, and a beautiful valley. Tourists are welcome to join trekking tours and interesting car excursions. 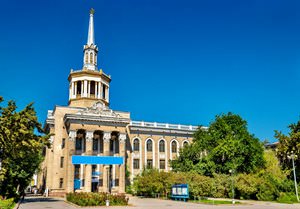 When it comes to historic landmarks of the country, it is important to mention the Tash Rabat caravanserai that was built in the 15th century on the site of an old monastery. This beautiful building is situated in a deserted area not far from the border with China. In the past, merchants, who were traveling on the Great Silk Route, stopped in this caravanserai to relax and replenish their supplies. In modern days, Tash Rabat is considered one of the main medieval landmarks of the country.
Saimaluu Tash is one of the most important and famous archaeological landmarks of the country. This is a petroglyph site that has many stoned covered with ancient rock drawings. Scientists think that this was a sacred site of fire-worshippers. There are more than 20,000 stones with petroglyphs in Saimaluu Tash. The age of some drawings on the stones is more than 2,000 years. The meaning of some petroglyphs is still a mystery to scientists. 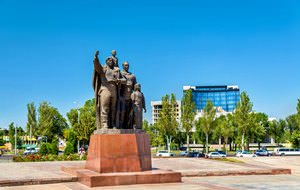 Kyrgyzstan’s airport in Bishkek accommodates daily flights from Moscow. There is also regular air connection with neighbor Tajikistan and Uzbekistan. It is also possible to reach Bishkek by train that departs from Moscow three times a week. The travel time is 78 hours. Kyrgyzstan also has regular bus connection with Almaty. As a rule, buses depart from Sayran Bus Station and head to Bishkek. There are also buses to Bishkek from Tashkent. Finally, it is easy to reach Kyrgyzstan by car from neighbor countries.
This article about iconic landmarks and sights of Kyrgyzstan is protected by the copyright law. You can re-use the content, but only under the condition of placement of an active link to www.orangesmile.com.

Famous and uniques places in Kyrgyzstan from our review series 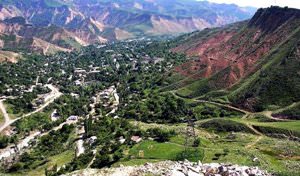 The sunny Kyrgyzstan, which is famous for its wonderful mountain scenery and fertile soils, has areas that are contaminated with nuclear waste. The most polluted is a fabulously beautiful mountain region Mailu-Suu. Tests of nuclear weapons were never conducted there and nuclear power plants were never built. During the past decades, uranium was being mined at these places. The environment is suffering because of this industrial activity. Huge amounts of radioactive elements are vented daily.

In 1946, the eponymous industrial city was founded in Mailuu-Suu district, whose residents were employed in the mining business. The name of the mountain area is literally translated as the oily water. In 1903, large deposits of oil have been discovered there. Uranium mines were closed in 1968. It … Read all 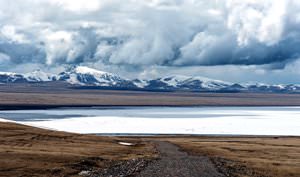 Tian Shan mountains conceal many strange secrets. In one of their Talkessel is located Sonkel lake. Its height above sea level forms 3 016 meters. Despite the impressive size, the lake is quite flat, its maximum depth is only 14 meters. The lake is surrounded by the incredibly beautiful meadows that the locals use for pasturing. The wonderful Hochgebirgssee is rich in fish. There are rare species of fish, such as Tibetan char and carp fish.

The surroundings of the lake have a rich fauna, more than 50 bird species live on its banks. From the fresh water lake springs the river of the same name, which is fed by the 18 mountain streams. Excursions to the lake are offered in the period from the end of maize to the end of September for the tourists. At other seasons, the mountain lake is … Read all
Country maps 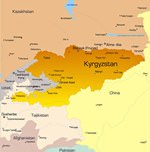 Sightseeing in popular cities of Kyrgyzstan

Bishkek
The history of Bishkek started in the 7th century. At that time, the settlement had another name, Julie, which sounded like “Blacksmith’s fortress”. Many centuries later, in 1825, a fortress was built in this area. The fortress got the name “Pishpek”. It was home to one of the largest garrisons in the Chui Valley. The city’s historical records include information about two captures by Russian troops and local tribes of Baitik Baatyr. The fortress couldn’t serve its purpose … Read more