Large plantations of banana and coconut palm trees, small factories specializing in processing fruits and vegetables, charming villages with neat huts, and hospitable islanders – this is how foreign tourists describe Kiribati. You will fall in love with this picturesque archipelago if you enjoy exploring exotic places, relaxing at tranquil and comfortable beaches, and trying scuba diving. If spending holidays on picturesque uninhabited islands has been your dream, Kiribati can help to make it come true.
Scientists assume that first settlement on the archipelago appeared yet during the 1st millennia BC. Carib tribes from Melanesia were the first people who founded their settlements in Kiribati. As local people are excellent seafarers capable of ocean crossings in handmade boats, they migrated between the islands, maintaining the population of Kiribati. British and American explorers visited Kiribati for the first time at the end of the 18th century. The archipelago became a protectorate of Great Britain in 1892.
This is when first settlements appeared on the archipelago. Just like many other islands in the Pacific, Kiribati was occupied by the Japanese during World War II. Nowadays, the islands are famous as the location of one of the bloodiest battles between Japan and the United States. After a series of battles, the US army managed to banish the Japanese from the archipelago. The islands became a territory of the United States, turning into an independent country in 1979. The two countries still have very close and active relations. Copyright www.orangesmile.com
Tarawa is the most populated and modern island of the archipelago. This is the capital of Kiribati. Bairiki, an islet of Tarawa, is the administrative center of the country. There are several interesting landmarks here, such as the Parliament building and the building of the main post office of the country. The capital is the location of the largest construction on the islands – a football stadium that frequently hosts not only sports competitions but also different cultural events. Not long ago, a new cultural center opened in the capital. It exhibits interesting artworks and crafts created by local masters.

Betio Islet is famous for its numerous landmarks of the war period. There was a large Japanese military base on this islet. After that, the United States used Betio for similar purposes. There are still old protective facilities on the island such as partially destroyed bunkers. Besides that, there are several large military cemeteries that are also important historic landmarks of Betio.
Tabiteuea Atoll is the best destination for everyone who wants to get acquainted with the traditional culture of islanders. For many years, aboriginal tribes lived in isolation, and this fact helped to maintain and save cultural traditions of the indigenous people. It is still possible to watch beautiful ritual dances, and the luckiest tourists can be present at interesting magic rituals.

Beru Island is a fantastic place where tourists can walk in mangrove forests and swim at beautiful beaches. The length of the island is 14 kilometers. It will not be hard to find a secluded beach for tranquil recreation. There is a beautiful coral reef near the island. Generations of fishermen have lived on this island, and they are always glad to share their knowledge with tourists.
Butaritari Island is famous for its natural landmarks. This is the only island of the archipelago that has the breadfruit tree. The fruit of this tree is an important part of the daily ration of local people. They roast the fruit in a certain way. Absolutely everyone is welcome to try the local delicacy. Tourists can also join interesting canoe excursions. The atoll of Makin situated nearby is also a popular tourist destination. Rich underwater life has made this island a popular choice for divers.

The Line Islands are the least populated part of Kiribati. A national park occupies a significant part of the islands. This region is famous for its diverse underwater world – local coral reefs have become home for many rare species of fish, clams, and other deep-sea creatures. If scuba diving doesn’t look appealing, consider bird watching on the Line Islands – local populations of sea birds are among the largest in the world.
The international airport near the capital of Kiribati regularly accommodates flights by Air Pacific. Flights from Nauru arrive four times a week. There are also several flights a week from Honolulu. The airplane from Fiji arrives once a week. Air Kiribati offers flights between the islands of the country.
This article about iconic landmarks and sights of Kiribati Islands is protected by the copyright law. You can re-use the content, but only under the condition of placement of an active link to www.orangesmile.com.

Famous and uniques places in Kiribati Islands from our review series 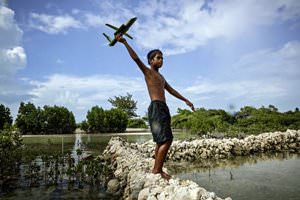 The Republic of Kiribati is one of the smallest island states in the world, its area is just 812 square metres. The state has placed in the Pacific Ocean. The global warming has also changed the life of this archipelago. It is too close to the full flooding. Unfortunately, people can do nothing to save the island from the natural disasters. For less than several decades, they will become unfit for human habitation and in 100 years will go under the water completely.

One of the main problems of the island state is the lack of fresh water. This problem makes the poor prognosis much harder. Islands don’t have rivers, that’s why people collect fresh water only during the rain. Every island, where people live, have special aqueducts which also collect water during the rain. Some of these … Read all
Country maps