Sightseeing in Kerman - what to see. Complete travel guide 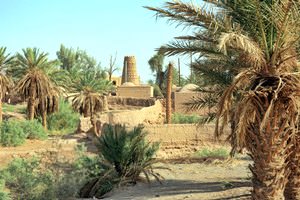 In the south-eastern part of Iran, tourists can visit Kerman that is the capital of the province with the same name. This city is situated in the middle of a sand valley with mountains on the north and east. Kerman has always been more popular with tourists than many other Iranian cities. Foreigners were visiting this settlement in order to admire centuries-old landmarks that reminded of the past events. Moreover, Kerman is not only a popular tourist destination but also a famous carpet weaving center. Local craftsmen can create true masterpieces.
Historical records tell us the story of Kerman. According to these documents, Ardashir I founded this town in the 3rd century. At that time, the settlement had another name - Veh-Ardashir. Initially, this was a fortress with the main mission of protecting the region from invaders. The Abbasid dynasty established its authority over the region in the 40s of the 7th century. They quickly forced local people to adopt Islam. The Buyid dynasty changed them in the tenth century and remained the rulers of the region until the end of the century. The Buyid control fell when Mahmud of Ghanzi and his army captured the Iranian land. Soon after that, the city’s name was changed to Kerman.
The Safavid dynasty started redeveloping the city that was in bad condition at that time. New buildings started quickly appearing in Kerman, and old buildings were thoroughly restored. The city was also growing in size. Agha Mohammad Khan from the Qajar dynasty attacked Kerman at the end of the 18th century. The results of this attack were really tragic – Kerman was completely plundered, and almost all people were killed. The “barbaric” dynasty maintained its reign in the region until 1921. After that, the revolution under the rule of Mohammad Reza Pahlavi set the indigenous people free. The process of rebuilding Kerman started. Copyright www.orangesmile.com
Tourists, who have never visited this city before, usually come to see the Ganjali Khan Complex first. This is an ancient bath complex that dates back to the 15th century. This is when Ganj Ali Khan started building bathhouses in many Iranian cities. Why is this bathhouse so popular? You need to visit this stunning complex and you will see that it is hard to find a more attractive architectural landmark and an art object in Kerman. 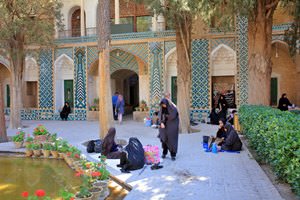 Paintings of the hunting scenes decorate the main entrance to the building. Step inside and pay your attention to the ceiling in the main hall. It is covered with ceramic tiles. Inside, the Ganjali Khan Bath has several interlocked rooms with arched separations. There is a big swimming pool with six adjacent rooms in the central part of the building. Different social classes had their own rooms. Nowadays, there is also a wax figure museum in the complex. Opened more than sixty years ago, this museum describes the six social classes of Iran.
The Moshtaghieh Dome is a true gem of Kerman. This is a large architectural complex with a three-domed mosque in the middle. Take a closer look at the dome and you will notice geometrical shapes on its blue surface. There is a beautiful garden with blooming roses in front of the main entrance to the mosque. A small pool nearby is always filled with water. Tall southern pines, which surround the pool, create idyllic scenery. 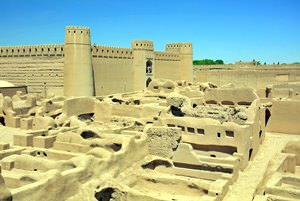 The tomb of Moshtaq Ali Shah is installed inside the mosque. A distinguished Sufi, Ali Shah was famous as a skillful Quran singer. He played the setar and sang verses from the sacred book. However, some people didn’t like Ali Shah and accused him of heresy. One day, Moshtaq Ali Shah was performing in the main city mosque. His enemies made a disturbance right in the mosque and killed him. Ali Shah died and was buried in the mosque that was later named after him.
There is one more local landmark not far from Kerman – the Stone Garden. Darvish Khan Esfandiarpoor was a deaf and mute man who had a big garden that he was proud of. Unfortunately, his garden dried up and only tree trunks without any leaves remained standing. The farmer wanted to restore the garden so much that he started hanging stones, textiles, and animal horns on the branches instead of leaves. He decorated the treetops with lamps and was always asking people to touch the lifeless wood. The old man was hoping that the warmth of human bodies could “awake” the dead trees. 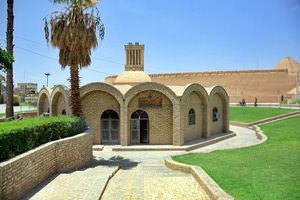 Kerman has an airport that accommodates flights from Tehran, Isfahan, and many other Iranian cities. There are direct international flights from Dubai and Najaf. It is also possible to reach Kerman by train from Tehran but the ride will be quite long in this case – the journey time is roughly fifteen hours. Buses from Tehran to Kerman are not much faster.
This guide to iconic landmarks and sights of Kerman is protected by the copyright law. You can re-publish this content with mandatory attribution: direct and active hyperlink to www.orangesmile.com.

City tours, excursions and tickets in Kerman and surroundings

Survived castles around Kerman
♥   Castle 'Bahramjerd Castle' Kerman, 1.8 km from the center. On the map

Sights around Kerman from our guide 'Extreme places on Earth' 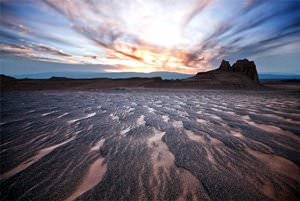 Distance from Kerman center - 171.6 km.
Abnormally high temperature is not the only feature of the Lut desert. Its territory can boast one of the largest sand dunes in the world, whose height is 407 meters. Among other attractions, Sir Kuh, which is one of the few oases inhabited, is notable. The main phenomenon of Lut Desert is that solar radiation on its territory has healing effect. … Read further

Fans of archaeology simply cannot fail to visit the ruins of the ancient city of Persepolis that were discovered relatively not long ago, at the end of the 20th century. Nowadays, the carefully restored ruins of the ancient city are a UNESCO Heritage Site. Having visited this gorgeous landmark, tourists can see restored fragments of ancient palaces and temples, cult buildings and engineering facilities, the real purpose of which is still a mystery to modern scientists. … Open

Search touristic sites on the map of Kerman

Sightseeing in regions nearby Kerman

Ras al Khaimah
Ras al-Khaimah, the most northern and smallest emirate, is a tourist center of global significance. It has many unique features, due to which it has gained fame and popularity. Nowadays, the picturesque emirate attracts admirers of very different kinds of recreation. The variety of landscapes situated on the territory of 1 700 square meters should be primarily noted. There are ... Open »
Fujairah
The city is really rich in beautiful sculptures and fountains. This place is not overloaded with massive skyscrapers, making it even more comfortable for high quality rest. Despite the small age of the emirate, here have remained really many historical monuments. The ancient fort is surely the most famous of them. Local museums exhibit a collection of artifacts discovered by ... Open »
Ajman
However, the city is good not only for recreation but also for sightseeing. The Museum of History is a great place to visit for everyone who wants to learn more about the emirate. Visitors will see buildings made by first settlers of Ajman. These houses are made from palm trees. There are also boats, old weapons, and one more interesting exhibit – a windmill, the main ... Open »
Sharjah
The ancient buildings are carefully restored. One can’t simply fail to visit local coral exhibitions. Besides this, Ajman Fort is the location of a museum, which exhibits wonderful relics of the past. Beautiful and modern hotels in Sharjah simply do not require any advertising. You will not find better service in this region, perhaps, even in Europe. The modern exhibition ... Open »
Isfahan
An image of a peacock in the central part of the cupola is a distinctive feature of this mosque. Colorful tiles cover all walls in the hall for prays. The tiles feature writings in Arabian. There are also verses from the Quran at the edges of the hall. Every year, thousands of tourists visit Sheikh Lotfollah Mosque. People come to see the unbelievable luxury of halls and ... Open »
Dubai
The main part of buildings in Dubai form modern business facilities, hotels and trading centers. However, there are some old monuments, museums and theaters in the city as well. Sheikh Zaeed House, Heritage Village and Dubai Museum are among the most popular and frequently visited historical places of interest in Dubai. Sheikh Zaeed Road is the most prestigious and modern ... Open »

All about Kerman, Iran - sightseeings, attractions, touristic spots, architecture, history, culture and cuisine. Prepare your trip together with OrangeSmile.com - find out the 'must see' things in Kerman, which places to visit, which excursions to take, where the breathtaking views are waiting for you. Planning your trip with this travel guide will help your to get the most out of Kerman in few days.