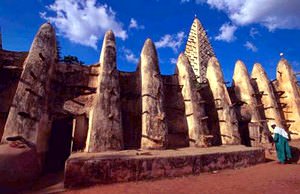 Mysterious and exotic, Burkina Faso is an emerging vacation destination. Nature landmarks remain the most popular activity for travelers in this country. A camel ride to the desert is an unforgettable experience. These rides start from Gorom Gorom and differ in length as they can last few hours or travelers can spend a night in the desert. Don’t forget to take warm clothes and blanket as it’s cold in the desert at night, even in Africa.
The next stop for curious travelers is the waterfalls near Banfora. The hike along the waterfalls is a great way to enjoy breath-taking views of the surroundings. There is also a lake in this region, which is home for the hippos. Visitors are welcome to rent pirogues and see the animals in their natural habitat in details. If you want to see giant crocodiles, head to Ouaga, which is famous for its crocodile lakes.
West of Banfora is famous for the Sindou peaks. The peaks look very unusual – the needle-like look is the effect of wind erosion. The villages near the peaks are a great place to know more about Senoufo culture, buy authentic souvenirs and national clothes. In many towns like Ouagadougou it’s possible to buy fabrics and have African outfits tailored for quite a modest fee. Copyright www.orangesmile.com
The city of Bobo-Dioulasso attracts travelers who come to see the Mud Mosque. The city also has a zoo, a large pottery market and several notable landmarks of the colonial era that belong to “neo-Sudanic” style. 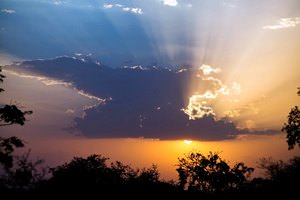 The capital of the country, Ouagadougou, is defined by many interesting places like Ouagadougou Cathedral built back to 1930s. This is one of the biggest cathedrals in Western Africa. Bangr Weogo Park is a large park with many paths for walking, its own small zoo and a small “sacred forest” with old pre-colonial era trees. Other notable landmarks include Grand Mosque of Ouagadougou, the Museum of Music, the National Museum, L’Unite Pedagogique, Naba Koom and Garden of Ouaga-Loudun Friendship.
Burkina Faso is considered the “home of music” for whole West Africa, so there’s no wonder that best music festivals are also held in this country. Travellers will find here music festivals to fit every taste, but the most famous ones are Festival des Masques et des Artes (festival of masked dancers), Festival Jazz (jazz festival), Festival International de la Culture Hip Hop (international festival of hip hop music), Semaine National de la Culture (a week-long festival dedicated to national culture), and Festival Panafricain du Cinema (the largest film festival in Africa). 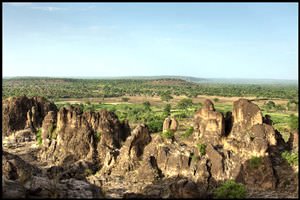 Until the 11th century, the territory of the present country had been populated by the Busa, Nenese and Grusi tribes that consequently fell before the Mosi. By the 14th century, several countries were formed in this territory. One of the most powerful and largest of them was Yatenga. The turning point for these countries was the colonial period starting in the 19th century.
Only in 1895, French conquerors managed to win the army of Yatenga. The country officially became a French colony in 1897. In the first decades of the 20th century, the colonial country saw liberation movements. In large cities, there were regular uprisings against French colonizers. The territories that had been conquered by France in the 19th century were unified into the single colonial country and called the Upper Volta. 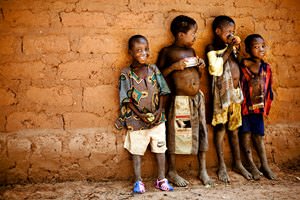 As a result of multiple uprisings, the country became absolutely independent in 1947. In 1958, it gained a status of the republic. The Upper Volta gained complete independence in 1960. In 1984, the country saw a serious military coup, after which Thomas Sankara became a head of the country. Exactly he gave Burkina Faso its present name.
This article about iconic landmarks and sights of Burkina Faso is protected by the copyright law. You can re-use the content, but only under the condition of placement of an active link to www.orangesmile.com.
Reference information
Map of all parks

National and city parks of Burkina Faso
♥   National Park 'Kabore-Tambi' . On the map 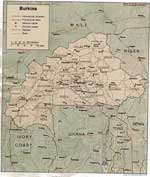 Ouagadougou
For those who like to visit unusual cultural institutions, it is worth looking into the Museum of Manega. It is located in the Oubritenga province and occupies a complex of interesting national buildings. The founder of this museum is the writer Titinga Frederic Pacere. In this unusual museum whose buildings themselves are invaluable exhibits, a very interesting collection of ethnographic and historical exhibits is collected. Collections of national costumes, interesting household items and … Read more