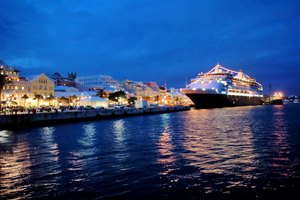 Hidden somewhere in the waters of the Atlantic Ocean, the islands of Bermuda are now famous as one of the most unusual and marvelous regions of the country. During millions of years, a unique natural region has formed in this region. The archipelago is particularly famous for its glorious sandy beaches and tropical forests with endemic flora. The country carefully protects its natural treasures, and this is the reason why no more than 600,000 tourists can visit the islands every year.
Famous Spanish adventurer Juan Bermudez is the discoverer of the archipelago. The islands got their name after him. His crew landed on the island in 1503. The colonial period in Bermuda started a lot later – in 1609. British colonizers suffered a shipwreck on their way to the Virgin Islands. They landed on Bermuda and founded their first colonial town here. The fertile soil of the island attracted more colonists. Agriculture remained the main occupation in Bermuda for many years.
Slaves brought from African countries were the main workforce at local plantations. The abolition of slavery took place only in 1838. Tourism started developing on the islands already at the end of the 19th century. This is the time when bridges between the islands and the first railroad in the country appeared in Bermuda. The archipelago is still a British overseas territory. Moreover, Bermuda signed a contract with USA in 1941, according to which the United States can use a 6 square-kilometer-large strip of land for military purposes during 99 years. Local military bases have long lost their importance. In accordance with the constitution ratified in 1968, the islands of Bermuda are a self-governed country. Copyright www.orangesmile.com
Hamilton is the capital and the major port of Bermuda. This important tourist center was founded by British colonizers at the end of the 18th century. The population of the capital is a little over a thousand people, so it is easy to explore Hamilton on foot. Tourists can admire attractive buildings of different periods, take a stroll in beautiful colonial quarters, take memorable photographs near the Cathedral of the Most Holy Trinity, and see gorgeous governmental buildings. The Museum of History in Hamilton exhibits a range of interesting artifacts obtained from sunken ships. 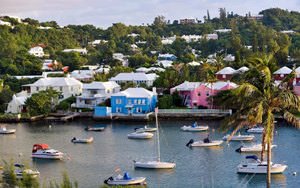 Tourists, who are more interested in historic landmarks rather than beach recreation, will find it exciting to take an excursion to the old capital of Bermuda, St. George's. Founded in 1612, St. George’s is one of the oldest colonial capitals in the world. The complete territory of the city is protected by UNESCO. King’s Square is the center of the historic city. The majority of beautiful colonial buildings are located near this square. It is also important to mention the old town hall building and the building that now houses the tourist bureau of Bermuda.
On Ireland Island, vacationers can attend an interesting historic landmark of the mid-19th century – an old fort, the building of which ended in 1863. This fort was built by the British as an attempt to protect the islands from the United States. The fort’s area included a large ship-building dock and the main military base. When the protective facility lost its initial purpose, it was decided to open a maritime museum in it. The Arts Center occupies a large part of the giant building. 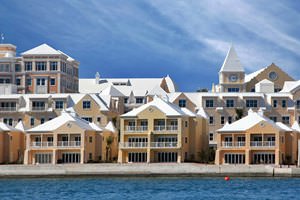 This area attracts not only fans of history and modern art. Ireland Island is the location of the biggest scuba diving center in the country – Bermuda Snorkel Park. This destination is very interesting to visit even for beginners and people who have never tried scuba diving before. Visitors can master diving together with professional coaches or book scuba diving tours to the most interesting diving sites.
The choice of areas for beach recreation is simply astonishing in Bermuda. Not far from Hamilton, there is a charming resort, Elbow Beach. It has one of the cleanest beaches in the world. In John Smith’s Bay, there is a beach with the same name. This is one of the largest beaches on the islands of Bermuda. This beach is perfectly suitable for everyone who doesn’t like small and over-crowded beaches. Church Bay is not only a serene place where vacationers can peacefully enjoy sunbathing. This is also a popular diving destination that is famous for its rich and colorful underwater world. 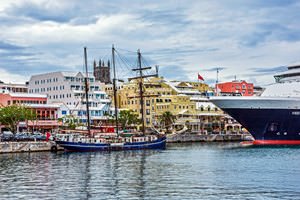 The majority of flights to the local airport depart from the United States. American Airlines has regular flights to Bermuda from New York and Dallas. Aircraft by Delta Air Lines connect Atlanta and Boston to the tropical island, and Continental Airlines has flights to Bermuda from Newark. There are also flights from Chicago, Boston, Baltimore, Washington, and Philadelphia. Tourists from London can use the services of British Airways.
This article about iconic landmarks and sights of Bermuda is protected by the copyright law. You can re-use the content, but only under the condition of placement of an active link to www.orangesmile.com.

Sightseeing in popular cities of Bermuda

Hamilton
The story of this city in Bermuda started in the 90s of the 18th century. The government decided to establish a residence in this area. For this purpose, it was decided to reserve almost six hundred thousand square meters. The Bermudian government made the city its official residence three years later. All governmental establishments moved to Hamilton – they were located in Saint George until 1815. That being said, Hamilton officially became a city only when the first cathedral was opened in … Read more