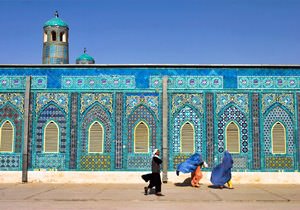 Unique Buddhist landmarks, majestic mountains, old mosques, and beautiful parks surrounded by deserted areas – these are just a part of interesting peculiarities of Afghanistan and things that attract tourists to this country. There are no beaches and internationally famous hotels here. People visit this country to find peace of mind and enjoy new historic discoveries. The unique culture that was formed during a thousand years adds special charm to this country.
The territory of modern Afghanistan is often called the cradle of human civilization. Scientists discovered traces of humans that date back to 3,000 BC. It is also believed that this region was the birthplace of such religion as Zoroastrianism. Yet in the 6th century BC, the ancient country became a part of the Persian Empire and remained there until its fall in the 4th century when Alexander III of Macedon defeated it.
This is the time when Buddhism became the main religion of the ancient country. For centuries, different empires conquered the small mountain country. Parthian Empire, Kushan Empire, Sasanian Empire – all of them had their impact on the formation of the local culture. Arabians conquered the region in the 7th century. In the 13th century, the devastating invasion of Genghis Khan changed the region’s life. During the late medieval period, the country’s territory was under the reign of the United Kingdom. Afghanistan became independent only in 1919. Copyright www.orangesmile.com
The Bamyan Valley remains one of the most mysterious landmarks of the country. This is where scientists discovered giant statues of Buddha carved from rocks. The height of the statues was from 30 to 50 meters. According to scientists, these statues were erected in the 6th century. They are now considered landmarks of the international level. In the 21st century, many of these statues were completely destroyed by the Taliban, but the valley is still a popular destination that attracts tourists. 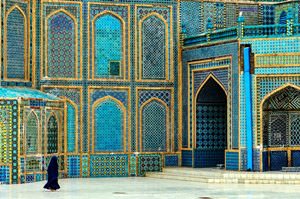 In the capital of Balkh province, the city of Mazar-i-Sharif, tourists can see a unique landmark – the Blue Mosque. A single glance at this mosque is enough to understand why it was named this way. The walls and cupolas of the mosque are covered with skillfully made mosaics in different shades of blue. This mosque was built in the 15th century. It has almost not changed since that time as the mosque has the original look and inner décor.
The Minaret of Jam is an important landmark of the earlier period. It is located in the region of the Shahrak District that is very hard to reach. Some scientists assume that the lost city of Firozkoh was probably located in this area. The minaret was built in the 12th century in the nearly inaccessible mountain region. The height of the building is 65 meters. Such location is one of the reasons why this gorgeous building has survived through centuries. Nowadays, the ancient minaret is a reminder of the Ghurid Dynasty that controlled a large territory during the early Middle Ages. 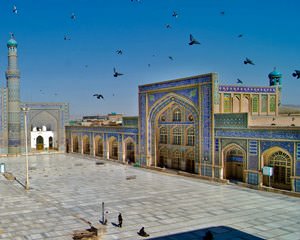 Afghanistan is not deprived of interesting natural landmarks, and the beautiful Garden of Babur not far from Kabul is one of them. There is an important historical place of interest in this park – the grave of the famous emperor Babur. A gorgeous garden consisting of 15 cascade terraces surrounds the grave. It is a wonderful place to walk among old trees, admire the gorgeous design of the park and its symbolic monuments.
The Citadel of Herat reminds of the great conquests of Alexander the Great. The citadel was erected by order of the great commander. Nowadays, this historic landmark is protected by UNESCO. There have been archaeological excavations in the citadel for several years. Inside the building, there is an interesting museum that exhibits precious artifacts and archaeological findings. 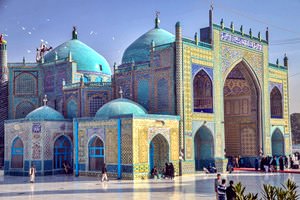 The Panjshir Valley remains one of the most beautiful regions of the country. This is a spacious valley surrounded by mountains. Here, tourists can participate in interesting excursions, during which they can admire marvelous mountain streams and spacious flatlands that are quite rare in Afghanistan.
Afghanistan has regular airline services with several countries. Russia (Moscow) has the most frequent flights to Kabul. It is also possible to reach the country by airplane from Iran and Pakistan, Tajikistan and Turkmenistan. It is also worth noting that there are buses from the Iranian city of Mashhad to Afghanistan. The country has a well-developed bus and train connection with Azerbaijan and Turkey.
This article about iconic landmarks and sights of Afghanistan is protected by the copyright law. You can re-use the content, but only under the condition of placement of an active link to www.orangesmile.com.

Famous and uniques places in Afghanistan from our review series 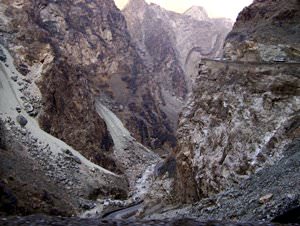 Inexperienced drivers who are intending to visit Afghanistan should definitely stay away from the Kabul-Jalalabad road. Kabul-Jalalabad is a highway with a length of about 60 km, linking the cities Kabul and Jalalabad. Fatal traffic accidents occur in this area every day. The number of deaths on the road is so high that the locals stopped counting long ago. Everyone here knows about the terrible features of the road.

The route Kabul-Jalalabad is a continuous series of sharp turns and cliffs. Car crashes are daily occurrences due to reckless driving. Moreover, the track is under the control of the Taliban anti-government armed groups. Kabul-Jalalabad is a really challenging highway and is a nightmare in the wet or dark. It is among the most dangerous roads in Afghanistan and the … Read all 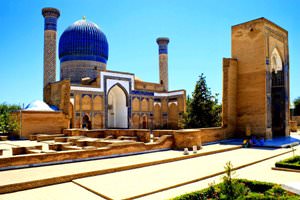 Travelers who are interested in history of the ancient world should definitely visit the city of Balkh, in Afghanistan. Its history goes back to more than 3500 years, to 1500 BC. Population of the modern city is about 80,000 people, but it’s still difficult to imagine that a few thousand years ago it has been ten times more. The heyday of the ancient city coincided with the heyday of the Silk Road, in those days, Balkh had the status of the greatest city and at least a million people have been living on its territory.

The major religious and commercial city raised its outstanding artisans and farmers; even today old crafts are among its distinctive features. Art of tanning has being perfected here for more than one hundred years, as well as the art of growing almonds and melons. Guests … Read all
Country maps

Sightseeing in popular cities of Afghanistan

Mazar-i-Sharif
According to local legends, Mazar-i-Sharif was founded at the beginning of the 12th century. The Seljuk sultan Ahmed Sanjar ordered to build a new city. Right from its establishment, Mazar-i-Sharif got the status of a sacred city because it was built on the site where Ali ibn Abi Talib, the holy person for all Islamic people, was buried. In the 20s of the 13th century, Genghis Khan attacked Mazar-i-Sharif with his army. He nearly destroyed the city, tortured and killed many people. The … Read more

Herat
The story of Herat started many millennia ago, yet during the ancient period. Historians still do not know the exact date when the city was founded. Earlier mentions of Herat date back to the period of the Achaemenid Empire. When Alexander the Great ran his campaign against the Persians and captured the territory of the modern city, he renamed it to Alexandria Ariana. When the legendary leader died, the city was captured by different kings and rulers and was added to different countries in … Read more