A fantastic variety of different climatic areas and a unique culture of indigenous people – these are the main peculiarities of the small country of Eswatini (also known as Swaziland) that is situated in the southern part of African continent. Here, tourists can enjoy a ride in spacious savannah, watch wild animals that live there, and then head to a stroll in a tropical forest. There are interesting trekking and horse excursions, during which vacationers can admire not only the beauty of local nature but also interesting historic landmarks.
Archaeological excavations proved that first settlers appeared in Swaziland during the Stone Age. Later, descendants of Swazi tribes moved to this region. Initially, their settlements were situated near the Indian Ocean coast. Other hostile tribes made the Swazi people move deeper into the continent. Bloody battles in this part of the continent lasted until the mid-19th century.
Closer to the end of the 19th century, almost complete territory of Swazi tribes was conquered by the Boer republic of Transvaal and became a part of it. During the Anglo-Boer War, which ended in 1902, the territory of Swaziland became a protectorate of Great Britain. The kingdom of Swaziland became an independent country in 1968. In 2018, the country officially changed its name to the Kingdom of Eswatini. Copyright www.orangesmile.com
The small country is home to one of the most beautiful and interesting parks in the world – the Hlane Royal National Park. Its large territory mostly has a plain terrain. There are many lakes that attract all kinds of wild animals. The watering site attracts antelopes and elephants, and tourists can also see such animals as hippos, leopards, giraffes, and buffalos. Besides animals, there are many rare species of birds, such as the griffon, leptoptilos, and eagle.

When you want to get acquainted with the lifestyle of aboriginal tribes, Mantenga Cultural Village is one of the best places to visit. It has long become an ethnographic museum in the open air. Descendants of Swazi tribes live in this village, doing their best to maintain the national traditions and rituals through centuries. Local people regularly organize interesting thematic performances with national dances and music for tourists. It is also possible to participate in interesting master classes dedicated to traditional crafts. Many huts in the village are open for visitors, so tourists can see the traditional everyday life of indigenous tribes in detail. During a visit to the village, tourists can buy many interesting souvenirs.
Shopping in the market situated in Manzini is one more amazing opportunity to see the life ordinary people. This is one of the largest markets in the country that offers a broad range of exotic fruit and vegetables. Needless to say, this is an amazing destination for shopping for all kinds of national crafts and artworks. Local merchants are used to seeing European tourists, but they do not like when foreigners take pictures of them or record videos, so it is better to refrain from doing this during a visit to the market.

If you enjoy walking, then don’t forget to visit the Malolotja Nature Reserve. There are many trekking trails for both beginners and advanced travelers. This reserve has a well-developed tourist infrastructure with areas where visitors can relax or make a picnic. The national park is famous for its rare flora. For example, it is possible to see blooming orchids and lilies at a certain time of the year.
Eswatini is rich in deposits of minerals, so there are old mines that have already become historic landmarks. Ngwenya Mine has already become a popular tourist attraction. It has large deposits of red ochre – local tribes started mining it roughly 43,000 years ago. Currently, this is the oldest known mine in the world. There are many rock drawings nearby, and all of them were made using the ochre extracted from the mine. An interesting fact – the mine is still active and used to extract iron and precious metals.

The unofficial capital of the country, Lobamba, is also rich in architectural and historic landmarks. Tourists may find it interesting to visit a beautiful memorial park dedicated to King Sobhuza II, the first monarch of the independent kingdom. There are a mausoleum and an interesting museum dedicated to the king in this park.
Eswatini has regular air connections with only two nearby countries – South Africa and Mozambique. The country also has bus connection with South Africa. Comfortable buses by Baz Bus take passengers to the capital of Eswatini from Durban, Johannesburg, and Pretoria several times a week. It takes approximately 4 hours to reach Mbabane from Johannesburg by bus. The ticket price is roughly US$15.
This article about iconic landmarks and sights of Swaziland is protected by the copyright law. You can re-use the content, but only under the condition of placement of an active link to www.orangesmile.com.
Country maps 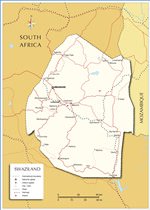