One of the smallest countries in the world, the oldest constitutional republic in the world that has had its constitution unchanged since 1600, a country with unique culture and traditions – this is a precise description of the main peculiarities of San Marino. Not many travelers are even aware of the existence of this small country, the population of which is a little more than 30,000 people. For many years, San Marino was in the shade of its bigger neighbor, Italy. The microstate has started drawing the attention of tourists only in modern times.
There are many legends about the charming country. In accordance with one of them, San Marino was founded in the 4th century by Christian monks from Rab Island. They built a Christian monastery here and spent several next centuries independently from neighboring countries. First official mentions of San Marino date back to the 11th century. At that time, a public gathering of families’ heads acted like the country’s government.
Military conflicts between the nearby territories had their impact on the history of San Marino. The battle against the Pope’s authority lasted several centuries, but the country managed to stay independent. Tiny San Marino endured the period of revolutions of the 19th century. In 1831, it became a shelter for many political refugees. The country was a neutral territory during World War I and II, but it still suffered damage from battles in 1944. The second part of the 20th century marked the start of the active development of infrastructure and tourism in San Marino. Copyright www.orangesmile.com
Monte Titano is not just a mountain, it is one of the main symbols of San Marino. Formed by layers of limestone, Monte Titano is not just an interesting natural attraction but also an important historic landmark. There are ancient towers on top of this mountain. The first one was built in the 11th century in order to protect the country. These towers are the main symbol of freedom for local people.

Gorgeous San Marino Church is the main religious landmark of the country. This building is a tremendous example of neoclassic style. The first shrine on the site of the modern church appeared yet in the 4th century. It was decided to build a new basilica in 1838. This church keeps a unique religious artifact – relics of Saint Marino that were brought to the republic in the period of its creation.
Museo di Stato is, without a doubt, the most visited cultural establishment in San Marino. The opening of the venue took place at the end of the 19th century. The museum’s collection was growing over the years, so the old building eventually became too small to exhibit all precious items. It was decided to move the museum to a new building in 1982. Nowadays, the museum is open in Palazzo Pergami-Belluzzi. It exhibits more than 5,000 unique historic items and precious artifacts. The museum opened its first exhibition in 1865.

Despite the small size of the country, San Marino has excellent infrastructure for active recreation. You can take a simple stroll to picturesque areas of the country or choose to visit the Adventure Park that is equally popular with tourists and locals. This recreational center is open in a beautiful forest. It offers 24 different trails, sports grounds, picnic areas, and more. There are suitable attractions for both adults and children.
If you are fond of unusual places of interest, then you will enjoy a visit to the Museum of Curiosities. It is safe to call it one of the most unusual and original museums in the world. This museum exhibits a collection of unusual and original items that look completely bizarre. For example, there is a medieval mouse trap with an absolutely stunning construction and a model of the tallest human in the world. The large collection of the museum is separated into several thematic halls, making a visit to this venue even more exciting.

Only 25 kilometers separate San Marino from the Italian city of Rimini that has a large international airport. The easiest way to reach San Marino is to arrive in Rimini by airplane from any part of the world and then head to San Marino in a bus or rented car. The tiny republic doesn’t have a railroad, so there are no trains in this country. Besides regular intercity buses, there are many excursion buses from Rimini to San Marino. Many tourists visit the republic during these one-day-long excursions.
This article about iconic landmarks and sights of San Marino is protected by the copyright law. You can re-use the content, but only under the condition of placement of an active link to www.orangesmile.com.

Famous and uniques places in San Marino from our review series 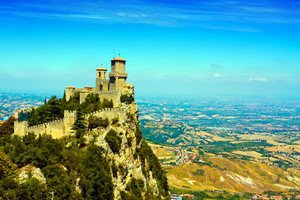 In the tiny state of San Marino, you will find the World Heritage site - the ancient Guaita castle, whose construction dates back to the 11th century. In reality the old castle is only a part of the architectural complex, which consists of three towers. They were erected much later than Guaita, which had served as a prison since its foundation. The hill Monte-Titano, on which there are three castle towers, is the highest point of the state. Its height above sea level forms 750 meters.

Many tourists visit the historical sight not only to look at the unique century-old architecture, but also to appreciate the excellent panorama of the tiny state. From Italian, the name of the Guaita tower is translated as 'the first tower'. By the year 1475 he had preserved the original form. Since the … Read all
Country maps 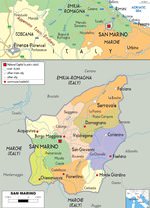