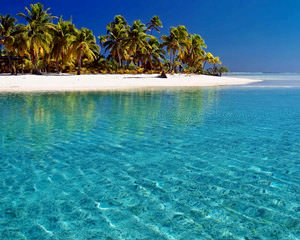 One of the most famous resorts, the country is also rich in magnificent architectural landmarks, beautiful nature resorts and great choice of entertainment centers. The best way to start your acquaintance with Puerto Rico is to visit Cordillera Central, where you will find several ancient cities hidden among mountains and green hills. Travelers are welcome to participate in excursions to the piedmont region, climb up to the snow-capped mountains and walk in centuries-old forests. Yabucoa is a small town famous for best beaches and close proximity to a beautiful nature reserve named Bosque Estatel de Carite. There are as many as three rivers in the territory of the reserve - Rio Grande de Patillas, Rio de la Plata and Rio Grande de Loíza, which banks are truly picturesque and perfect for fishing.
When and where to 'hang out' in Puerto Rico - festivals and celebrations
Most Puerto Rican residents are Catholics, so Christmas is celebrated on the island in December. Catholic masses are held from December 15 to December …
Read further
Don't forget to include visits to San Cristobal Canyon and unique forest Toro Negro Reserve into your excursion program. The forest covers an area of more than 7 thousand acres and provides shelter for 700 types of plants and over a hundred of different bird and animal species. Cabo Rojo is also a great destination for fans of nature sights. It is located in the southern part of the country. The lighthouse named Faro Los Morrillos de Cabo Rojo has become a symbol of the area. The lighthouse is equipped with an observation deck, from which visitors will enjoy beautiful panoramic views. Cabo Rojo will be a perfect choice for travelers who seek beautiful secluded bays, lush park zones and plenty of space for walking. The famous Bahia Fosforescente (Phosphorescent Bay) is located to the east from Cabo Rojo. This bay attracts thousands of visitors due to unique properties of local plankton. Every evening one can see how coastal waters start shining in a mysterious way. Such natural phenomenon is very rare.
The piedmont region is home to the Arecibo Observatory, which is famous thanks to the oldest radio telescope in the world. The telescope keeps functioning and is used to study distant objects in space. Not so long ago the Museum of Science and Space was opened in the observatory. Visitors of this place will learn more about the latest achievements of scientists. Don't forget to visit Rio Camuy Cave Park and Ceremonial Park on your way back from the observatory. The park was founded by the Taíno Indians 800 years ago. Various religious ceremonies, celebrations and important events of the tribe took place in this park. Several buildings and temples have survived till our days. Finally, old buildings and interesting museums can be found in the city of San Juan, which historic heritage is protected by the government. Copyright www.orangesmile.com
For active traveler - national parks, landscapes and nature of Puerto Rico
The magnificent nature of Puerto Rican islands can fascinate any seasoned traveler. Fresh air, crystal-clear emerald waters, rainforests, wonderful …
Read further

The discoverer of the island state was Christopher Columbus. His team boarded the coast of Porto Rico in 1493. The archeological research has shown that the first settlements in the islands were formed about 4 000 years ago. Little is known of the pre-Colombian history of the archipelago. Spaniards formed the first colonial settlements in the islands in 1508. The archipelago gained its present name in 1521. When the colonization began, almost 30 000 Indians resided in the islands. According to the official data, only 1 000 native people survived by 1530. The causes of aborigines’ death were virus diseases brought by Europeans. Many people died because of the heavy physical labor. 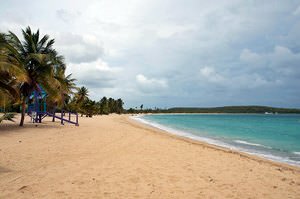 The islands had been under Spain by the 19th century. The second half of the century was marked by the local residents’ struggle for independence. In 1860, more than half a million people permanently resided in the islands. At that time, the vast majority of local residents were below the poverty line. In the second half of the 19th century, many cities saw uprisings for independence. In 1898, the first autonomous Government was established.
National cuisine of Puerto Rico - specialties, recipes and restaurants
The small Caribbean island of Puerto Rico is a tropical paradise where Afro-Caribbean, Spanish, American, and local Taino cultures are mixed together. …
Read further
However, the country had managed to maintain the autonomy for several months. In July 1898, the war between Spain and the USA began and, as a result, the whole territory of the islands was conquered by the USA. At present, the islands are still under the United States. In recent years, local residents are pushing for the archipelago’s accession to the USA as the 51st state. 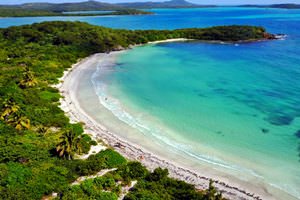 Besides interesting nature attractions and perfect conditions for beach recreation, the island state is notable for its eventful cultural life. During the year, a lot of interesting festivals and carnivals are held here. Some exciting holidays are dedicated to saint patrons.
National traditions and mentality of people in Puerto Rico
The population of Puerto Rico is an enchanting mixture of races and cultures. Spanish, Afro-Caribbean, and Taíno blood flows in the veins of most …
Read further
Local residents borrowed many beautiful traditions from Spaniards, for example, their passion for salsa. Every festival includes performances of local dance groups. It will be interesting for fans of the event tourism to visit the islands at the end of January when the traditional Saint Sebastian Festival is held. In November, it will be also interesting to visit Ponce. At this time, the Bomba y Plena Festival is organized.

This article about iconic landmarks and sights of Puerto Rico is protected by the copyright law. You can re-use the content, but only under the condition of placement of an active link to www.orangesmile.com.
Puerto Rico guide chapters 1 2 3 4 5 6 7 8 9 10

Famous and uniques places in Puerto Rico from our review series 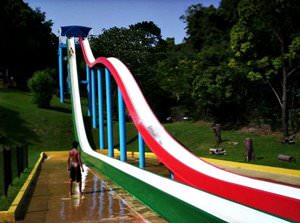 The largest water park in the Caribbean is found in Puerto Rico. There is a first-class center of water entertainment called Las Cascada. This water park is located in the incredibly picturesque natural surroundings within green meadows and parks. The entertainment center fits perfectly into the surrounding landscape; it makes the rest even more enjoyable. This water park is not as big as many other well-known aquaparks of the world, but it has great swimming pools and water slides of varying levels of complexity and great rides for extreme sports fans, as well as recreational areas for the young ones.

Opening of the water park has been held in 1985. A few years ago, it was completely renovated. After the upgrade, new and modern rides appeared. A beautiful tropical garden surrounding the … Read all
Country maps

Ponce
One of the main natural attractions is the Rio Camuy Cave that was formed more than a million years ago. Currently, it is one of the largest caves in the Western Hemisphere. This huge cave was discovered in 1970, and studies have shown that it once served as a home to representatives of indigenous peoples. The cave is attractive for its crystalline stalactites and stalagmites, and a picturesque river flowing along the bottom. A quite unusual tourist attraction is a museum called Park … Read more