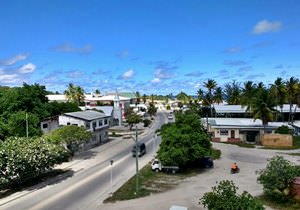 Micronesia is a complex of more than two thousand small islands, the total area of which is only 2,600 square kilometers. Are you interested in uninhabited islands covered with lush tropical flora? Have you ever dreamt of relaxing at wild beaches that only a handle of tourists is aware of? Do you find it interesting to see how indigenous people live on remote islands away from modern civilization? If yes, then you should definitely visit the islands of Micronesia.
There is no much information about the pre-colonial period of the islands. According to archaeological excavations, first settlements on the islands appeared yet 2,000 years ago. During the Middle Ages, almost all islands became a Spanish colony. Active colonization of the islands took place in the first half of the 16th century. The volcanic islands attracted colonizers not only because of their fertile land but also because of the beneficial strategic location.
Nauru Island became a German territory in the 19th century, and the Gilbert Islands became a British colony. Within a short period of time, Spain lost almost all of its colonies in Micronesia. Even Guam became a part of the United States of America. Guam still has the same status while all other islands in Micronesia became independent in the middle of the 20th century. Copyright www.orangesmile.com
Every island has its wonderful peculiarities. For example, Kosrae Island is a marvelous place with picturesque mountain sceneries. Mount Finkol is the highest point of the island. The height of the mountain is 634 meters. Finkol has quite flat slopes so it is easy to get to the top by walking. Not far from the island, there is a chain of fabulous coral reefs that attract divers. 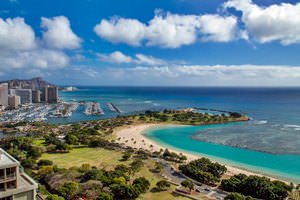 On the island of Pohnpei, tourists can attend a unique archaeological region – the ruins of Nan Madol. This is a town that was founded by colonizers more than 500 years ago. The old town is a complex of manmade islands connected by a complex chain of canals. Visitors can see well-preserved stone walls, the length of which is more than 1.5 kilometers, as well as fragments of different stone buildings. There are more than a hundred of manmade islands in Nan Madol in total.
Do you prefer to relax at tranquil beaches? In this case, the Chuuk Islands are exactly what you need. This atoll consists of more than a hundred islands. The area is perfect for beach recreation and scuba diving. The Chuuk Lagoon is an incredibly beautiful place. While relaxing at a serene beach, visitors can see charming small islands not far from the coast. 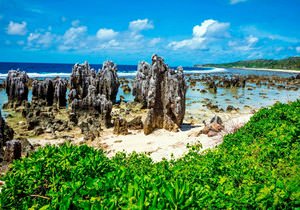 Atoll Woleai is the best destination for all tourists who want to get acquainted with the culture and traditions of indigenous people. This atoll consists of 22 islands. Only five of them are inhabited and have a permanent population of approximately 800 people. The lifestyle of indigenous people hasn’t changed for centuries. Visitors can still see unusual huts and handmade canoes – the latter are more popular than modern motorboats among local people. This atoll doesn’t have any hotels, but it is not hard to find shelter in a house of local people.
The Mortlock Islands (also known as the Nomoi Islands) are one of the most comfortable for tourists. There are several guesthouses for visitors where they can stay as long as they want. The islands have gorgeous beaches and many beautiful areas for strolling. Many tourists come with the aim of visiting local artisan workshops. Local people are well-known for their skillfully made wooden masks that remain one of the most popular souvenirs. Descendants of Spanish colonizers make up the majority of the Mortlock Islands’ population, so don’t be surprised to see Christian churches in these remote islands. 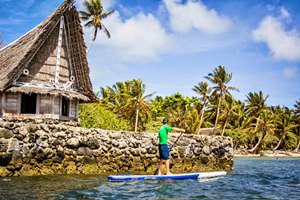 Nauru Island is a truly unique place. The size of this state is only 21 square kilometers, which makes Nauru the smallest independent country in the world. The choice of entertainment for tourists is really wide. They can relax at picturesque beaches and admire the look of the surrounding islands, can try scuba diving or fishing or simply take a stroll to the picturesque lakes.
On Tabiteuea Island, tourists can get acquainted with one of the most beautiful national traditions of islanders – ritual dancing. Local people are always excited to see foreigners genuinely interested in the culture of the islands. However, they dislike photo and video cameras. It is necessary to ask them whether it is allowed to take pictures or videos in advance. 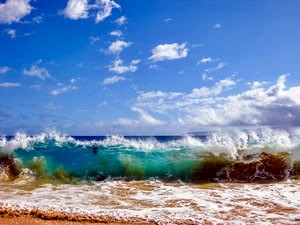 It is possible to reach Micronesia by airplane. Guam has the biggest airport on the islands. It regularly accepts flights from Manila, Honolulu, and Tokyo. Tourists can move between the islands and atolls by plane. Some regions of the island country are linked by ferries.
This article about iconic landmarks and sights of Micronesia Islands is protected by the copyright law. You can re-use the content, but only under the condition of placement of an active link to www.orangesmile.com.
Country maps