For centuries, Côte d'Ivoire or Ivory Coast has been attracting travelers by its excellent sandy beaches, healing oceanic air, and beauty of equatorial forests. Among activities available to tourists, we can mention exploring beautiful colonial towns, watching elephants and hippos in their natural habitat, and eating in high-quality French cuisine restaurants that offer inimitable French cuisine with an African twist. You will fall in love with this country if you are interested in African culture and history.
Pygmy tribes inhabited the territory of modern Côte d'Ivoire in the 1st millennia BC. Hunting and picking were the main occupations of these people. Other African peoples settled in this territory only in the 11th century. The Senufo and Mande tribes were among the first. At the beginning of the 18th century, the Kong Empire was situated in the territory of Côte d'Ivoire. It was one of the largest centers of trade in West Africa. First European travelers reached Ivory Coast in the 15th century. After that, merchants and adventurers from the Netherlands, Portugal, and Denmark visited the country.
European merchants were very interested in Ivory Coast because this was an excellent place to buy not only gold and ivory but also slaves. Immigrants from France were the first foreigners who built settlements in the country. This event happened in 1637. French colonizers were exploring the coastal territories until the mid-19th century. They built many new towns and protective buildings in Ivory Coast. Côte d'Ivoire officially became a French colony in 1893. It became a French overseas territory in 1946. In 1958, Ivory Coast became an autonomous republic. Copyright www.orangesmile.com
Yamoussoukro has been the capital of the country since 1983. Tourists arrive in this city in order to visit its fabulous religious landmarks. Here, tourists can see the largest church in the world – the gorgeous Basilica of Our Lady of Peace that was finished in 1990. The eye-catching church has many beautiful elements, such as skillfully made stained-glass windows created by best European masters. It is also interesting to visit the Ethnographic Museum and the Museum of History, as well as numerous art galleries.

The country is rich in national parks, and Taï National Park and Marahoué National Park are just some of the nature reserves that deserve the attention of tourists. The total area of these two parks is more than 4,000sqm. Tropical forests occupy the majority of the reserves’ territory. It is also possible to see rare plants and animals here. Taï National Park is protected by UNESCO because of its ancient rainforests and giant, 50-meter-tall trees, the age of which is more than 500 years. Many forests were destroyed during the colonization period, so it is a miracle that rainforests in Taï National Park have survived.
If you prefer to pack your vacation with different excursions, the Man region in the central part of the country is the right choice. This part of Ivory Coast has high concentration of different interesting historic and natural attractions. Moreover, there are many picturesque settlements with the traditional lifestyle. Finally, fabulous hilly landscapes cannot leave visitors indifferent. There is a beautiful bamboo forest in the nearest suburbs of Man that hides an amazing natural landmark - Les Cascades de Man.

Fans of shopping find it very interesting to visit the city of Korhogo. This is a large city founded in the 14th century that is also known as the main city of the Senufo people. Starting from medieval period, the city has been famous for its skillful artisans. It was one of the main merchant cities, and so it attracted best potters, blacksmiths, and woodworkers. A large and noisy market in the center of the city still remains the main landmark of Korhogo. There are many artisan workshops that offer unique souvenirs for tourists.
Do you prefer beach recreation? In this case, the port town of Sassandra is an ideal destination for your vacation. This town has everything needed for a memorable beach holiday – excellent beaches, interesting sea excursions, and different water sports. The nearby old fishing villages are always glad to see new guests.

It is possible to reach Côte d'Ivoire from Europe - Air France has regular flights to the country that depart from Paris. There is also a train to Ivory Coast from Burkina Faso that has several rides a week. The train crosses such cities as Bouake and Bobo-Dioulasso. It is also possible to reach different cities of the country by buses that come from Burkina Faso, Ghana, Guinea, and Liberia. There can be fewer buses during the raining season.
This article about iconic landmarks and sights of Ivory Coast is protected by the copyright law. You can re-use the content, but only under the condition of placement of an active link to www.orangesmile.com.

Famous and uniques places in Ivory Coast from our review series 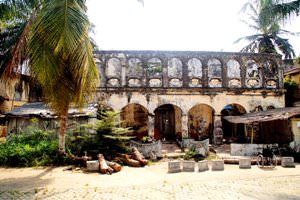 In Côte d'Ivoire you will find an amazing city of Grand-Bassam, which will definitely please those travellers who like historical sites and unique architectural monuments. In the period from 1893 to 1896, this city was a French colonial capital. After the eruption of the yellow fever, Grand-Bassam lost its original importance.

The historical part of the city manage to survive after more than a century. In 2012, Grand-Bassam was recognized as a landmark of the world significance. The streets of Grand-Bassam are as created for slow walks during which you can admire the surviving colonial buildings and planted palm trees. At present the territory of the city Grand-Bassam is divided into two parts – the Old Town and the New Town. They are connected to each other by the bridge, which … Read all

Africa is also famous for its forsaken settlements and towns. If you are a walker through the unusual areas, don’t miss to visit the town of Grand-Bassam in Côte d'Ivoire. Hundreds of years ago a French colonial settlement located in this place. The city settled down in an impossibly beautiful area and was remarkable for its housing development. Initially it was a tourist centre with lots of guesthouses, and most beautiful parks and gardens. In 1896, the French Government decided to leave the city because of the regular outbreak of yellow fever. However, for a few more decades Grand-Bassam has remained the main tourist attraction and its infrastructure was being improved.

In the 60s of the last century Grand-Bassam began to lose its former popularity and gradually fell into ruin. In … Read all
Country maps 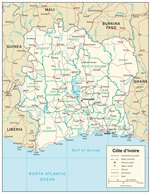