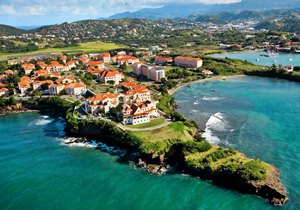 The island country of Grenada has always attracted numerous guests by its secluded beaches and bays, beautiful coral reefs, and dense tropical forests. This is an ideal vacation destination for everyone who has always dreamt of a secluded and tranquil place, wanted to stroll in large citrus plantations and to relax at beautiful beaches with soft sand.
Christopher Columbus is considered the discoverer of the islands. His crew landed on Grenada’s coast in 1498. At that time, different Indian tribes inhabited the archipelago, but Spanish colonizers managed to conquer them. Later, beautiful islands with fertile volcanic lands started attracting the French and British. France bought the islands in the middle of the 17th century, and Brits set up their reign on the islands in 1763. The United Kingdom completely established its colonial regime in 1783, and Grenada became an independent country only in 1974.
The former colonial city of Saint George’s is the capital of the country. It was founded by the French in the middle of the 17th century. The city is located in an incredibly beautiful place, on a slope of a sleeping volcano. Here, vacationers can relax at a wonderful beach with white sand or choose to explore lush tropical forests. The capital has many buildings that date back to colonial times. According to the local law, it is prohibited to make buildings taller than palm trees. Grand Anse is the biggest and most beautiful beach on the island. It is located at a distance from big cities and settlements. This beach is very big, so it is not hard to find a suitable area for tranquil and trouble-free relaxation. This coastal area is deprived of any infrastructure. Soft sand is a great replacement of lounge chairs, and palm trees growing near the coast are nice “umbrellas”. Copyright www.orangesmile.com
The Grand Etang National Park is the main natural landmark of the island. Gorgeous tropical forests occupy a large part of the park’s territory. There are also many plantations that are used to grow cocoa and various fruits. Don’t forget to find a beautiful waterfall hidden inside the national park. This waterfall has an unusual name – Seven Sisters – because it has seven cascades. Swimming in this waterfall is the final step of many tourist routes in the national park. 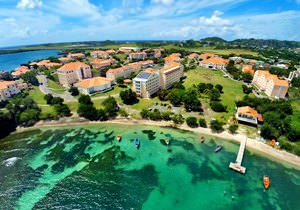 When describing historic attractions of Grenada, it is necessary to pay attention to Fort George. This magnificent fortress was built in the capital yet in 1710. Nowadays, more than three centuries later, the old building is still in great condition, and so the city’s administrative facilities are open in it. A part of the old fort is open for visitors who can see collections of interesting artifacts and look at old canons. By the way, these canons are in a working condition and are used during national holidays for firework purposes.
Fort Frederick is a mysterious building not far from the capital. Despite the fact that this fort was built at the end of the 18th century, only ruins remain from on its site. The fortress participated in many fights and wars that almost completely ruined it. The protective construction is located on a small hill, so this is a naturally formed observation point with glorious views of the capital and the coast. 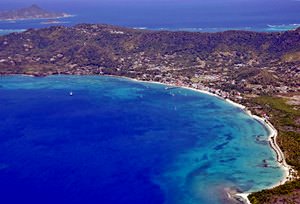 Not far from Grenada, there is one of the most unusual attractions on the planet - the Underwater Sculpture Park. Modern sculptor Jason de Caires Taylor is the founder of this unique park. He opened it in 2006. There are 65 sculptures installed approximately 3 meters deep underwater. Such an unusual underwater installation serves an important purpose – these sculptures act like a manmade reef. Nowadays, divers from all over the world come to visit this underwater park. Even people, who have never tried scuba diving before, can dive and explore this area. For experienced divers, Grenada has prepared beautiful coral reefs and underwater caves.
Do you like quality rum? Then you will find it very interesting to visit the River Antoine Rum Distillery that was founded yet in 1785. There are sugarcane plantations near the factory. The distillery uses this sugarcane to make the popular alcoholic drink. Sampling different types of rum is an essential part of excursion to the River Antoine. 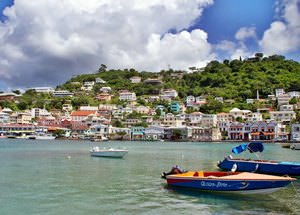 Travelers can reach Grenada from London airport or from Frankfurt. In the first case, you will need to use the services of British Airways. Aircraft by Lufthansa and Condo depart from Frankfurt.
This article about iconic landmarks and sights of Grenada is protected by the copyright law. You can re-use the content, but only under the condition of placement of an active link to www.orangesmile.com.
Country maps 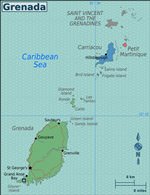