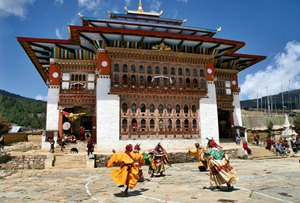 Yet 30 years ago, this country was completely isolated from the rest of the world. Nowadays, it has many incredible unofficial names. “Kingdom of the Thunder Dragon”, “The Last Shangri-La”, “The Country of Happy People” – people use these names to call Bhutan and praise its unique culture and the atmosphere of complete serenity. The small country located at the slope of the Himalayas has only recently become open to tourists. Since that time, it has conquered hearts of thousands tourists worldwide.
The territory of the modern country was populated already in the second millennia BC. As Bhutan’s territory is isolated and hard to reach, we don’t know much about the early history of this country. First written mentions of Bhutan date back to the 8th century. Already at that time, the Buddhist culture was dominating in the region. In the 9th century, Langdarma became the emperor in Tibet. He was a notable anti-Buddhist, so many temples and monasteries were destroyed during the period of his reign. Hundreds of monks were killed for their faith.
It is believed that this is the time when the new country in the Himalayas appeared. Scientists and monks, who had to leave Tibet to escape from Langdarma, founded the country of Bhutan. The country reached the peak of its prosperity in the 17th – 18th centuries, and this happened much thanks to the efforts of King Ngawang Namgyal. After the death of the king, a civil war started in Bhutan and it lasted almost 200 years. During numerous armed conflicts, Britain took control over a part of Bhutan’s territory. The country became completely independent only in 1949. Copyright www.orangesmile.com
In Bhutan, tourists can visit one of the most unusual Buddhist temples in the world - Paro Taktsang. There are many incredible legends connected with this place. The monastery is built on the ledge of the nearly vertical rock cliff. Monks’ cells were carved right into rocks. The territory of the monastery offers a truly striking view of the mountains. The name of the monastery can be literally translated as “Tigress’s Lair”. It is located in an incredibly hard-to-reach mountain area, so the monastery became available to pilgrims and tourists not many years ago. 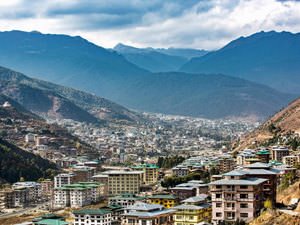 Paro is one of the largest and most interesting towns in Bhutan. It is located at an elevation of more than 2,500 meters above sea level. Paro is famous for its marvelous architecture. There are buildings and other constructions of different epochs and architectural styles.
The old city of Thimphu is the capital of the country and one more area rich in architectural landmarks. The Memorial Chorten is definitely one of them. This temple was built relatively not long ago, in the second half of the 20th century. This is one of the most prominent Buddhist shrines in the country. Inside, there is a luxuriously decorated altar with the statue of Buddha Samantabhadra. Travelers usually mention the unusual look of the temple, its colorful décor, and original architecture. 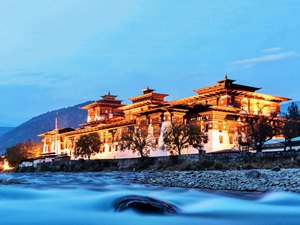 Among modern attractions of Bhutan, it is also important to mention the gold statue of Shakyamuni Buddha. The statue was made in 2010. The height of the gold-covered statue is 51 meters, but this is not the most interesting fact about it. The statue is hollow inside, and so it was filled with as many as 125,000 tiny figurines of Buddha, each of which is also covered with gold. At a rough estimate, the cost of this unique monument is US$100 million.
Don’t forget to include a visit to the National Museum of Bhutan to your vacation plan. This museum is open in a beautiful old building that once was a dzong. The museum’s exhibition features unique Buddhist artifacts that attract not only tourists but also pilgrims. There are also interesting collections of ethnographic and historical exhibits. 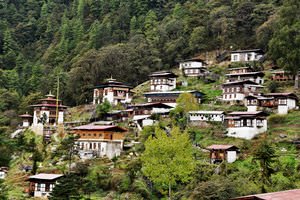 When you are in a mood of exploring picturesque natural places, consider making an excursion to the Royal Manas National Park. This is a unique ecosystem. The park’s territory includes spacious alpine fields, tropical forests, and snowcapped mountains. The national park is home to many species of rare animals such as the water buffalo and Asian black bear. It is also possible to see the South Asian river dolphin in local mountain rivers.
The mysterious Himalayas never stop attracting nature enthusiasts. Legends about alien civilizations and powerful races of superhuman still thrill modern travelers. Some regions of the Himalayas are open for ordinary tourists, and some regions are available for professional alpinists only. 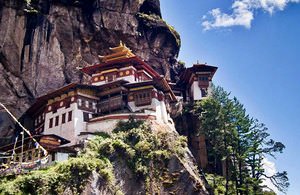 The only way to reach Bhutan is to take a flight from Bangkok by the Druk Air carrier. The country has the only airport in Paro. Despite the end of the country’s isolation, Bhutan still doesn’t accept flights by foreign air companies. Paro Airport also accepts flights from Yangon and Dhaka, but there is no regular connection with these cities.
This article about iconic landmarks and sights of Bhutan is protected by the copyright law. You can re-use the content, but only under the condition of placement of an active link to www.orangesmile.com.

Famous and uniques places in Bhutan from our review series 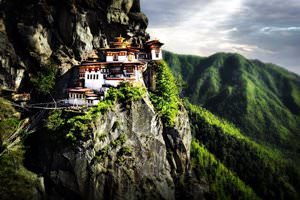 Fans of stay in the atmosphere of solitude are attracted by the Paro Valley in Bhutan. Here is one of the most beautiful Buddhist monasteries in the world. It owns a proud name - the Tiger's Nest. This monastery is located in a very remote and dangerous area. The shrine was built on the slope of a steep cliff at an altitude of 3 120 meters above sea level. Construction of the monastery was completed in 1692. The history of the place is inextricably linked with the name of Guru Rinpoche, who was honored by many residents of the country as the second Buddha.

According to one legend, a tigress brought the great guru on its back to a steep slope of rocks. There he found a cave, in which eight evil beings lived. Guru Rinpoche meditated in a cave for several months, after which it got rid of … Read all 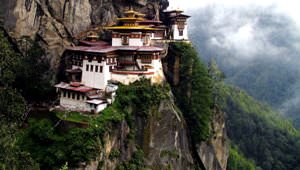 Many travelers go to Bhutan in search of unique Buddhist monasteries. This tiny state features hard-to-get Paro Taktsang monastery. Its name can be translated as ‘Tiger's Lair.’ The monastery is situated on a steep slope of rocks, it’s about 700 meters above the earth. According to historical records, the monastery was founded in 1692, but the very first monks have settled in these areas much earlier.

They were attracted by hillside caves, which suited perfectly for solitude and meditation. Many amazing legends are associated with foundation of the monastery; one of its founders was the greatest Indian teacher Padmasambhava. He was brought to the precipitous cliff by his wife, who turned into a tiger and carried her husband on her back. Currently pilgrims can use several options to … Read all
Country maps