Family trip to Ashgabat with children. Ideas on where to go with your child 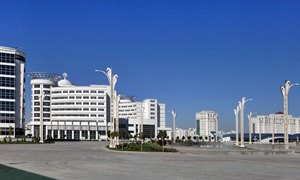 Ashgabat offers a vast choice of children's entertainment. This city is considered the most attractive for families in Turkmenistan. Be sure to take kids to the Turkmen State Puppet Theatre, the only theater of its kind in the country. Performances have been held here literally every day since its opening in 2005. The theater features a very beautiful design and two big halls. After the spectacle, families will have a chance to walk in a picturesque park decorated with many ornamental plants and fountains.
Guide to Ashgabat sightseeing - things to see and to visit
Ashgabat was the capital of the Soviet Turkmen Republic. When USSR collapsed and Turkmenistan became an independent country in 1991, the government decided to limit entry to the country for …

Open
An equally interesting place for kids is the National Museum of Wildlife of Turkmenistan opened in 2010 in the vicinity of Ashgabat. The central attraction of the museum is a zoo. It was founded in a natural area covering about 40 hectares. More than 250 animal species, a large aviary, and a terrarium are found in its territory.
Walking around the zoo, you can see the most common species of animals and birds in the country, as well as enclosures with domestic animals, which are allowed to be fed by visitors. In the covered part of the zoo, there is an aquarium representing the most amazing inhabitants of the Caspian Sea. By the way, it offers very interesting tours, which promise to be eye-opening even for adults. The territory of the zoological center features a very beautiful design with many artificial lakes and fountains, playgrounds with attractions for the youngest visitors. Copyright www.orangesmile.com
Excursion over cultural sights of Ashgabat - 'must visit' points of interest
Ashgabat is also the country's leader in the number of architectural and historical attractions. Many sightseeing tours of the city start with the Turkmenbashi Ruhi Mosque, the largest …

Open
Alem is considered the most amazing cultural and entertainment center in Ashgabat. An original pyramid-shaped building with a huge Ferris wheel on its top was built for this center. The enclosed wheel's diameter is 57 meters, which makes it the largest of its kind in the world. The unique entertainment center offers its guests lots of interesting leisure options. You can visit a space-themed museum with your kids and try out some interesting interactive exhibits. There are several excellent observation decks on the upper levels of the building. Here, visitors are invited to cozy restaurants and cafes with a huge selection of dishes and children's favorite desserts. 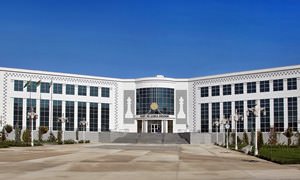 The country's largest and most beautiful amusement park, Turkmenbashi Fairy Tale World, is located here in Ashgabat. It is themed based on local folklore and occupies 33 hectares. For the convenience of visitors, a small train runs through the park's territory. Turkmenbashi Fairy Tale World has dozens of attractions and playgrounds, including a Ferris wheel. Part of the entertainments is in covered pavilions, so it is comfortable to have fun here in any weather. In the amusement park, you can also visit a small ethnographic museum and an aquarium where kids can learn about fish species inhabiting the Caspian Sea.
Your active city break in Ashgabat. Attractions, recreation and entertainment - best places to spend your day and night here
If you feel like it's time to diversify your tours of historic sites, go check local entertainment centers and picturesque parks. There are also lots of things to do for fans of natural …

Open
The city has several beautiful parks, including some historical ones. They would also be great for families with children. One of the most picturesque and comfortable is Victory Park. Its territory is planted with many trees, in the shade of which it's nice to relax on the benches even on a hot day. The park itself is very spacious, providing a lot of space for walking and active games.

Inspiration Square is another attractive park area for walks and outdoor recreation. It is a beautiful shady alley framed by many trees and picturesque flower beds. Statues of prominent artists and writers are installed along the entire length of the alley. This is one of the most unusual city squares, so you can take many interesting pictures during a walk.
Shopping in Ashgabat - main shopping streets, outlets and boutiques
Shopping in Ashgabat promises to be incredibly interesting. The city has seven large oriental markets, craft workshops, and specialty stores, as well as modern shopping malls. For the best …

Open
In recent years, many modern shopping and entertainment centers have opened in Ashgabat. Each one has its own interesting entertainments: modern cinemas, bowling alleys, children's attractions and playgrounds for the smallest ones. It's a pleasure to spend time in such centers in the middle of the day when it's too hot outside. With older children, you can travel to the outskirts of Ashgabat rich in interesting reserves and natural attractions. There are also several equestrian centers where guests are always welcome. Here you can enjoy horseback riding tours and lessons.

This guide to family holidays in Ashgabat is protected by the copyright law. You can re-publish this content with mandatory attribution: direct and active hyperlink to www.orangesmile.com.
Ashgabat - guide chapters 1 2 3 4 5

City tours, excursions and tickets in Ashgabat and surroundings

Amusement parks near Ashgabat
♥   Amusement park 'World of Turkmenbashi Tales' Ashgabat, 5.9 km from the center. On the map

Zoos and gardens in/near Ashgabat
♥   Zoo 'Ashgabat Zoo' Ashgabat, 25.6 km from the center. On the map 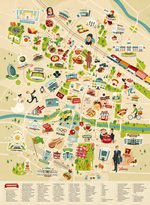 Photogallery of best places of Ashgabat

Interesting places to visit with children around Ashgabat

Baku
There are so many interesting entertainments for children in Baku, and a visit to the Ferris wheel is a must for the guests of the city. It is located on the coast. From the Ferris wheel, one can perfectly see the famous city attractions and admire the most beautiful areas. Nearby, there is a well-equipped park with benches and playgrounds for kids, and in summer, tourists can ... Open »
Yerevan
In Yerevan, travelers with children will not be bored. They should definitely look into the local Lunapark. The choice of attractions here is just fine, the youngest visitors will be able to ride on bright merry-go-round, and older children will like more exciting attractions and playgrounds. Attractions are located in the territory of a beautiful park, in which there are ... Open »
Kuwait City
In Kuwait, tourists with children should definitely visit the local Kuwait Zoo. It is located on the territory of an incredibly beautiful park, in which there are artificial lakes with swans. Animals in this zoo stroll along spacious enclosures. In this zoo, you can see rare predators including brown bears and lions. Among the friendliest inhabitants, it is worth noting ... Open »
Baghdad
Although Baghdad can hardly be called a popular holiday destination for tourists with children, it still has some attractive places to offer families. Tours of historical sites and most museums can only be of interest to adults, while the picturesque Baghdad Zoo is perfect for kids. It was almost completely destroyed during the war so most of the animals died in the zoo. ... Open »
Ras al Khaimah
Ras al-Khaimah is well suited for vacation with children of all ages and temperaments. There are interesting exhibitions for curious children here. You can also find many attractions and the opportunity to spend a lot of time in the water for those who like to swim. European breakfast, lunch, and dinner are a nice bonus in most hotels. This will allow you not to think every ... Open »
Islamabad
There are not many entertainment centers and children’s institutions in Islamabad, as in some other cities of the country. However, vacationers with children do not have to be bored here. One of the most interesting places in the city is the Pakistan Museum of Natural History. This natural-science museum is not at all like many others that one can visit in other cities. Part ... Open »

Guide to sightseeing and entertainment for children in Ashgabat - parks, attractions, museums, zoos, water-parks. All fascinating and educational sites of Ashgabat, which are must visit and see for your child. Find out the best discovery routes and places for kids (local theaters, exhibitions and museums), where you can spend quality time together. Ashgabat for families with children.