Video of flights over top monuments of Sao Paulo in HD format.
Use 'Full Screen' mode.
This review is a great opportunity to look at architectural landmarks of Sao Paulo from a new perspective – namely, from the sky. Click the video to enjoy a 3D flight over the architectural ensemble of Sao Paulo and to look at the most interesting landmarks in detail - at Sao Paulo Cathedral, Luz Station, Museum of Art, Municipal Market, Museum of Football and many others. Below you will find the most amusing historic facts and professional photographs of every famous sightseeing in Sao Paulo. 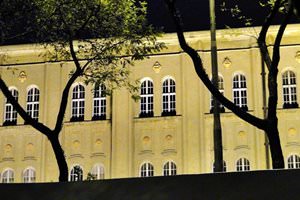 Facts:
» The Sao Paulo Cathedral is the Catholic cathedral of Sao Paulo, one of the largest neo-Gothic churches in the world.
» The history of the cathedral dates back to 1589, when it was decided to build the main church of the colony in the small village of Sao Paulo. Construction of the present cathedral began in 1913 and lasted for almost half a century; the cathedral was consecrated in 1954. Towers were finished only in 1967.
» That’s the largest religious building in Sao Paulo, as it has a height of 111 m and a width of 46 m.
» The building of the cathedral was constructed in Gothic Revival style with Renaissance-style dome. About 800 tons of marble were used for interior design. Small capitals are decorated with coffee beans, pineapples and animal figures.
» The crypt of the cathedral located under the main altar houses the underground church decorated with marble sculptures. There are the tombs of bishops and archbishops of Sao Paulo. 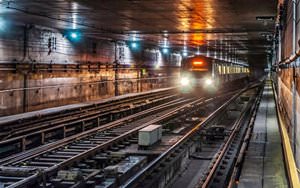 Facts:
» The Luz Station is the railway station in the district of Luz in Sao Paulo. It was built in the late 19th century. The station is a terminal for commuter trains and subways of Sao Paulo, bringing together many of the lines of both systems.
» For decades, the station has dominated above the urban landscape, and its clock served to check all watches in the city.
» The Luz Station is an architectural monument showing the influence of traditional architecture. In many ways it defined the face of the city.
» The Luz Station is also known for its interactive museum of Portuguese Language that was open on the third floor in its building in 2006.
» The aim of the museum is to create a living representation of the Portuguese language and to educate visitors through its unusual aspects. 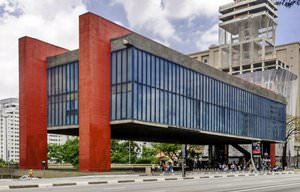 Facts:
» The Museum of Art is one of the most famous and important museums in Latin America; furthermore, it's one of the most visited venues in the world.
» The museum area of 10,000m2 contains 8,000 works of art.
» The Museum of Art was founded by journalists Assis Chateaubriand and Pietro Maria Barda. Its modern building opened in 1968 was designed by the architect Lina Bo Bardi.
» Two colonnades support 9,200-ton building shaped in form of 74-meter cube.
» The museum has one of the best Western art collections in Latin America. 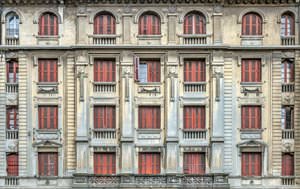 Facts:
» The Municipal Market of Sao Paulo is the place, where you can buy all kinds of fruit; that's unique not only in Brazil, but also in other countries of Latin America.
» The building of the market itself is the interesting sight built in 1933 by famous architect Francis de Azevedo Ramus.
» Amazing columns and arches of the market make the building an architectural monument. Walls of the second tier of the building are decorated with large colorful stained-glass windows depicting the Brazilians involved in cultivation and harvesting.
» The second tier of the market is rich in cafes and restaurants, where you can taste the local cuisine.
» The market is open from five o'clock in the morning to 4.00pm. The highest prices are at the entrance; they become lower as you move to the center.

Facts: » The Museum of Football is the venue dedicated to the football theme. The museum is set in front of the municipal stadium, the area between the monumental facade and rear rack is of 5,600m2.
» The Museum of Football is dedicated to the national sport; it's not associated with any particular club or fan group.
» The Museum of Football includes multimedia space, a memorial gallery of the best Brazilian players, a room dedicated to the fans and journalists, the studio audience for discussions about sports, clubs and shops, a multimedia room, a restaurant and a cafe.
» The museum features permanent exhibits, which are monitored and updated by researchers such as radio holdings or offices providing statistics on Brazilian players abroad.
» Every year the museum attracts many visitors not only from Sao Paulo, but also from across the country and around the world.

CONTINUE - PART II »»
This guide to architectural sightseeing in Sao Paulo is protected by the copyright law. You can re-publish this content with mandatory attribution: direct and active hyperlink to www.orangesmile.com.
Sao Paulo - guide chapters 1 2 3 4 5 6 7 8

Build your walking routes in Sao Paulo on the landmark map

Architectural landmarks in the regions around Sao Paulo

Rio de Janeiro
Christ the Redeemer statue in Rio de Janeiro is one of the most famous and popular monuments in the world. It even was chosen to be one of the New Seven Wonders of the World in 2007. The Christ statue sits atop Corcovado Mountain in Rio de Janeiro; that’s the symbol of Rio de Janeiro and Brazil as a whole. The height of the statue with pedestal is 38 meters, and arm span is 28 meters. Being the highest point of the county, the statue becomes ... Open »
Buenos Aires
Argentine National Congress is the building, where meetings of the National Congress of Argentina are held. National Congress Palace was built in the neoclassical style. An interesting feature of the building is a dome that is 80 meters high and weighs 30,000 tons. The dome of the National Congress is adorned with the crown with chimeras. The edges of the gable of the palace are decorated with sculptures of winged lions, and the emblem of ... Open »
Santiago
La Moneda Palace is the official residence of the President of Chile. La Moneda is literally translated as “coin” from Spain. The name is associated with the initial function of the building. There had been a mint before. The construction started to serve as a presidential residence only in 1846. The palace opened its doors to tourists in 2003. Today, you can admire the luxury interior of the palace and incredibly beautiful courtyards. ... Open »
Lima
The Cathedral of Lima is a very picturesque building decorated with statues and stone elements. The cathedral looks very spectacular at night when it is illuminated from all angles. Francisco Pizarro, a Spanish conquistador and founder of the city, started the construction of the first Catholic church in 1535. Over the centuries, it had been destroyed by earthquakes and rebuilt many times. That is why the exterior of the church combines different ... Open »
Cape Town
Cape Town Hall - a large majestic building of European architecture. It was built by European architects Henry Austin Reed and Frederick George Green. Their project won at the specially organized contest. The building material (a honey-colored stone), from which the town hall is built, was brought directly from England. They finished the construction of the building in 1905. The organ, installed in the Town Hall, is considered as the pearl of ... Open »
OrangeSmile.com - online travel reservation expert providing reliable car rental and hotel booking services. We feature more than 25.000 destinations with 12.000 rental offices and 200.000 hotels worldwide.
Secure Server