«« BEGINNING - PART I
Video of flights over top monuments of Sao Paulo in HD format.
Use 'Full Screen' mode.
In this article, dedicated to the architecture of Sao Paulo, we will 'fly' over such iconic historical monuments as Museu Paulista, Altino Arantes, Municipal Theatre, . In addition to the virtual flight video, we offer the most important and interesting facts about every landmark, including high-quality photographs. You can also use this article to make your own excursion tour in Sao Paulo. Simply use the icon

to locate the object of interest on the map of Sao Paulo. 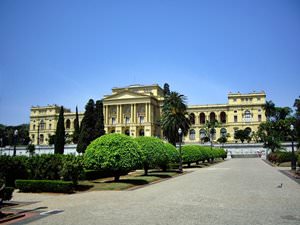 Facts:
» The Museu Paulista in Sao Paulo was created to preserve the memory of the proclaiming of Brazilian independence.
» Today, the museum's collection of Paulista consists of approximately one hundred thousand historical objects of various kinds. The museum has antique furniture and clothing accessories, famous historical figures, as well as works of art.
» The library that has a huge book collection of 100 thousand volumes and 40,000 manuscripts is situated in the same building. Its room contains all sorts of historical documents.
» The most popular work of art in the museum is Independence or Death by Pedro America.
» The Museu Paulista is one of the main attractions that you must visit. The museum has entrance fee. 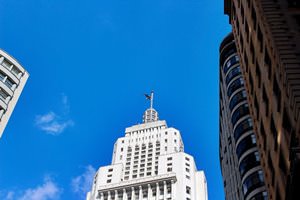 Facts:
» Altino Arantes building is one of the most famous skyscrapers in Sao Paulo.
» This 36-storey building with an internal area of nearly 18,000 m2 reaches a height of 161 meters.
» During construction of the skyscraper architect Plinio Botelho do Amaral was inspired by Empire State Building in New York, so apparently they are very similar.
» The skyscraper houses the headquarters of Banespa city bank.
» The observation deck of a skyscraper situated on the 33rd floor offers magnificent views of nearly 40 kilometers, so that the whole city is almost at a glance. 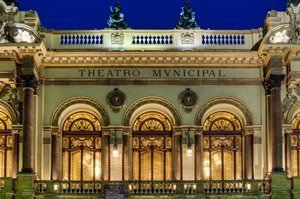 Facts:
» The building of the Municipal Theatre was built in 1911 in neo-Baroque style.
» The Municipal Theatre is one of the city's attractions. That's the historical and architectural monument designed by famous Brazilian and Italian architects.
» The theater is decorated with various elements of marble and bronze, stained glass windows and mosaics.
» A long time, only rich people had the opportunity to go to the theater, but at the moment it became public.
» There were many celebrities, such as Isadora Duncan, Anna Pavlova, and Ella Fitzgerald performing in the Municipal Theatre.

This guide to architecture monuments in Sao Paulo is protected by the copyright law. You can re-publish this content with mandatory attribution: direct and active hyperlink to www.orangesmile.com.
Sao Paulo - guide chapters 1 2 3 4 5 6 7 8

Plan your own tour over Sao Paulo on the monuments map

Search for architecture monuments of Sao Paulo on the map

Tours through neighbours of Sao Paulo

Rio de Janeiro
Christ the Redeemer statue in Rio de Janeiro is one of the most famous and popular monuments in the world. It even was chosen to be one of the New Seven Wonders of the World in 2007. The Christ statue sits atop Corcovado Mountain in Rio de Janeiro; that’s the symbol of Rio de Janeiro and Brazil as a whole. The height of the statue with pedestal is 38 meters, and arm span is 28 meters. Being the highest point of the county, the statue becomes ... Open »
Buenos Aires
Argentine National Congress is the building, where meetings of the National Congress of Argentina are held. National Congress Palace was built in the neoclassical style. An interesting feature of the building is a dome that is 80 meters high and weighs 30,000 tons. The dome of the National Congress is adorned with the crown with chimeras. The edges of the gable of the palace are decorated with sculptures of winged lions, and the emblem of ... Open »
Santiago
La Moneda Palace is the official residence of the President of Chile. La Moneda is literally translated as “coin” from Spain. The name is associated with the initial function of the building. There had been a mint before. The construction started to serve as a presidential residence only in 1846. The palace opened its doors to tourists in 2003. Today, you can admire the luxury interior of the palace and incredibly beautiful courtyards. ... Open »
Mexico
The high Catholic basilica of the Most Blessed Virgin Mary with a bell tower dates from the 16th century. It took two hundred years to construct it. The exterior is a mix of three architectural styles: Baroque, Renaissance, Neoclassicism. A tall construction made of grey stone and finished with white granite has two seventy-metre towers. It’s decorated with carved pillars and an arched entrance. The corner towers have 30 bells. The central ... Open »
Atlanta
The Georgia State Capitol was built on the site of the city hall in 1889. The exterior of the Capitol building in Atlanta is very similar to the Capitol in Washington. The government residence was equipped with elevators, water supply system, gas, which was an ultramodern innovation for that time. The Capitol building used to be the tallest in Atlanta – 83 meters. The golden dome is decorated with a small Statue of Liberty. The fourth ... Open »
OrangeSmile.com - online travel reservation expert providing reliable car rental and hotel booking services. We feature more than 25.000 destinations with 12.000 rental offices and 200.000 hotels worldwide.
Secure Server