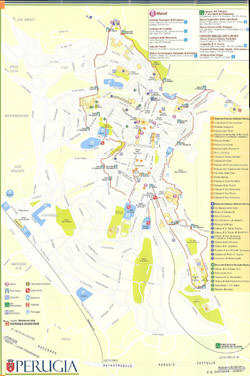 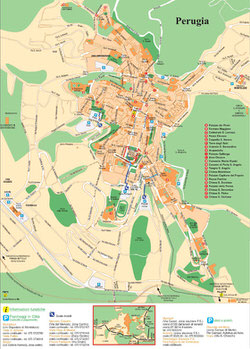 Interactive maps of hiking and biking routes around Perugia

1. You can zoom in/out using your mouse wheel, as well as move the map of Perugia with your mouse.
2. This interactive map presents two modes: 'Biking Routes' and 'Hiking Routes'. Use the '+' button on the map to switch between them.

This Perugia map has two modes: 'Railway Network' and 'Landscape & Rural Map'. Use the '+' button on the map to navigate.

Transportation by sea, particularly ferries, is also very popular. You can use them to travel between the coastal regions of the mainland, as well as to access neighboring territories. The fare depends on the class of the ferry itself, the distance of the route, and the services provided in the complex. On modern ferries there are swimming pools, cafes and bars, as well as playgrounds, and even Duty Free shops. Several taxi companies are operational in the country. You can order a car by phone or catch one right on the street. On weekends, cars from taxi companies are very few, so when you call you have to wait at least 20 minutes. The cost of pick up is at least 3 euros. At night, on public holidays, as well as on weekends, tariffs are slightly increased. Nonetheless, as a rule, a kilometer ride will be from one to one and a half euros. If you want to quickly get from one point of Italy to another, it is possible to employ the services of airports. … Open

Unlike the Gran Paradiso, located near Liguria, the Cinque Terri National Park is famous not only for its unique nature, but also for its cultural heritage of historical significance. Cinque Terri is listed by UNESCO as a World Heritage Site. It contains numerous bays, small beaches, small islands and medieval towns with unique walls. They protect the terraces with vineyards, descending to the cliff on the shore and are a dwelling for animals and birds. The coast, covered with rocks, is well adapted for nesting birds. The water abounds with a variety of fish, which creates an excellent observation point, allowing you to see birds in their natural habitat. … Open

Our guide to Perugia

Besides this Perugia is rich in historical and cultural sights. Make sure you don’t forget to visit the ancient settlement of the Etruscans, walk in the picturesque alleys and see the exhibitions in the museums of this city. One of the main squares of Perugia is Piazza IV November, which is decorated by the oldest fountain in the city, which is named Maggiore. This is a large scale construction decorated with … Open

The grand fountain is the main decoration of the central square of the city. Its opening was held in 1278. The opening of the fountain is associated to a significant event in the history of the city being the completion of building of a new water system. The fountain is decorated with a unique statuary group and by the side of the majestic landmark tourists will find pools of weird shape. As a result of numerous … Open

The location features wide alleys sinking in wild greenery of aged trees, antique statues and picturesque flower beds, cozy alcoves and benches. The Giardino Frontone park is the best place for serene leisure in the open air right in the heart of the city. During the warm season the park often holds different open air concerts. Tourists visiting Perugia with kids can opt for the La Citta della Domenica park. It takes … Open

Those tourists tending to a more comfortable and easy atmosphere will love to visit the La Bottega di Perugia restaurant. The eating house serves guests till late night. The visitors will find several dozens of popular ethnic dishes on the menu of the restaurant. The La Bottega di Perugia eating house features rather affordable pricing policy. At night a free table is rather hard to find. Argentine cuisine … Open

Traditions and mentality of Perugia

One of the most waited Perugia holidays among foreign guests is the Eurochocolate Festival. The festival was first held in 1994. The sweet holiday takes place in October. For the last several years the festival has been visited by more than a million of foreign guests. The event engages more than 150 world renowned companies and chocolate producers. The main event of the festival is still a tasting of sweet products … Open

The city also has interesting ancient sights, and the Hypogeum of the Volumnus family is a great example. The ancient tomb dating back to the 3rd century BC has preserved Etruscan inscriptions. According to available historical data, it served as a burial place for Etruscan patricians. During the study of the Hypogeum, beautiful antique funerary urns were found, including an urn with the ashes of Arnth Veltimna … Open