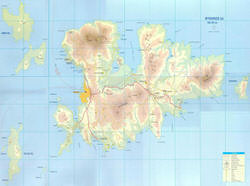 Interactive maps of hiking and biking routes around Mykonos City

1. You can zoom in/out using your mouse wheel, as well as move the map of Mykonos City with your mouse.
2. This interactive map presents two modes: 'Biking Routes' and 'Hiking Routes'. Use the '+' button on the map to switch between them.

This Mykonos City map has two modes: 'Railway Network' and 'Landscape & Rural Map'. Use the '+' button on the map to navigate.

Our guide to Mykonos City

Diving amateurs may join a school of underwater swimming and scuba diving and in several tutorials master the basics of the diving. Expert divers are offered to rent all the necessary gears and equipment. The assistants of the rental center also organize tours for divers to the most popular diving destinations of the island. The most popular among youth is the Paranga beach which offers its visitors a vast choice … Open

The same popular and interesting for tourists is the Kikis Tavern restaurant. The restaurant is elegant and warm and due to its inimitable atmosphere, romantic ambience and excellent quality of treats the place has gained popularity among travelers. By its decoration and appearance the restaurant resembles a cozy tavern or porter house, its hall is decorated with massive wooden furniture and original décor items. … Open

Traditions and mentality of Mykonos City

Mykonos has recently become one of the most tolerant resorts for LGBT persons. Here, they can not only vacation in a comfortable atmosphere, but also enjoy various entertainments. During the year, a lot of themed LGBT festivals are held. Every year, they are visited by thousands of tourists from all over the world. One of the main LGBT festivals is XLSIOR that is annually held in August. During it, fiery parties and … Open

The most visited cultural center on the island is the Ethnographic Museum, located in the historical ​​Kastro. The museum is housed in an old two-storey building, with six halls for its exhibits. The visitors of the museum can see collections of antique ceramics, national clothes and furniture, which local craftsmen made by hand hundreds of years ago. The museum contains a very interesting collection of … Open

Mykonos City for children - what to visit

Anyway, the south coast is famous for its wonderful beaches because it is more sheltered from the wind. If you travel with children and prefer active pastime, you should visit the Platis Gialos Beach (Πλατύς Γιαλός). Divers gather on the Psarrou Beach (Ψαρρού) that is famous for its clean water. In the south, there is the Agrari Beach. It is a calm and peaceful place where you can swim and … Open

The Narcissus Olive Oil Shop offers wonderful olive oil of the local production and natural oil-based cosmetics. Visitors can also have a wide choice of food specialties as a supplement to traditional souvenirs. The FW Bags specializes in designer handmade handbags and is primarily targeted at women too. Here, they can choose small handbags and clutch bags of genuine leather. There are also accessories for … Open