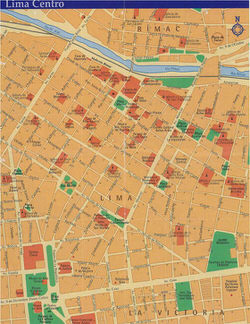 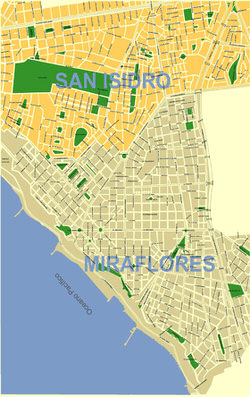 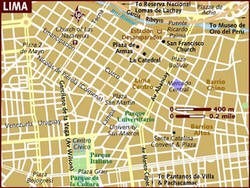 Interactive maps of hiking and biking routes around Lima

1. You can zoom in/out using your mouse wheel, as well as move the map of Lima with your mouse.
2. This interactive map presents two modes: 'Biking Routes' and 'Hiking Routes'. Use the '+' button on the map to switch between them.

This Lima map has two modes: 'Railway Network' and 'Landscape & Rural Map'. Use the '+' button on the map to navigate.

Overview of festivals and celebrations in Peru

The people of Peru love holidays and celebrate them on a grand scale. New Year is traditionally celebrated on January 1. According to the traditions established by the Spaniards, Christmas trees are installed. Santa Claus gives gifts to children. Fairs are held in many cities. Injun rituals like the worship of the moon give flavor. The old year effigy is burned in some places. The celebration is accompanied by fireworks and concerts. Lima's founding week begins on January 18. Conquistador Francisco Pizarro founded Ciudad de Los Reyes on this day. This place was named Lima among the local population later. Residents of the capital celebrate the foundation of the city. The celebration is accompanied by dances, processions, concerts, and shows. The Marinera dance festival takes place in La Libertad in January. This folk dance has incorporated both features of dances of pre-Columbian civilizations, as well as Spanish and even Gypsy dances. … Open

Our guide to Lima

Some good clubs are designed especially for those hunting for virtual reality experience - these are Virtual X and Mundo VR Realidad Virtual. Want to play bowling with a large group of friends? Go ahead - you are always welcome at Larcomar Club. Another facility suitable for active pastime is Loma Amarilla Skatepark where you can not only try yourself as a skateboarder but also watch professional shows. … Open

Festivals and events in Lima

A visit to Peru's capital in October and November is a great opportunity to experience the rich local culture. Firstly, the Feria Taurina del Señor de los Milagros opens on Sundays to present performances of Spanish and Latin American bullfighters. Secondly, at the end of October, a colorful religious procession is held to mark the Festividad del Señor de los Milagros. Plaza Mayor is the endpoint of the parade … Open

8. Tipping is customary to literally any service. In restaurants and cafes tip is about 10% of the total order. You can leave 1-2 sols for a maid and a doorman. In the taxi it’s just enough to round the amount up to any convenient sum. 7. Before you take a picture of local people, be sure to ask them for permission. Some may agree to take a photo for free, but others want a reward for a photo … Open

Lima has some wonderful bookstores, including Libreria El Virrey, the most popular one among tourists. A wide selection of fiction and specialized literature is available to its visitors. The store has a large department with books written in English. Libreria El Virrey also sells many interesting books and colorful booklets on the history, culture and famous sights of Peru. Sissai Jewelry can be recommended to … Open

Lima for children - what to visit

In Lima there is a wonderful children’s museum – ChocoMuseo Plaza de Armas. This original chocolate museum presents visitors the most interesting sculptures and expositions made completely of chocolate and sugar. Here visitors are told how cocoa beans are grown, collected and processed. On the territory of the museum, there is an excellent shop where you can buy nuts, quality chocolate and other useful … Open

Fans of fascinating excursions will surely be impressed by the Larco Museum. It is housed in a beautiful 18th century mansion that used to be a royal residence. Now in the halls of the mansion there are collections of unique Peruvian ceramics. The age of some exhibits is more than a thousand years. The museum houses a rich collection of archaeological finds, including stone carvings and prehistoric tools. Not long … Open