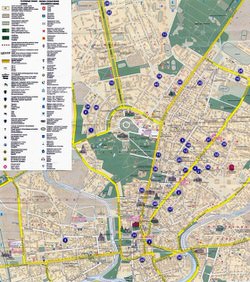 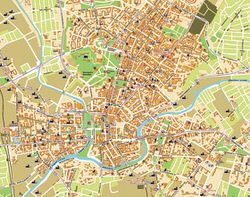 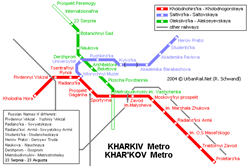 Interactive maps of hiking and biking routes around Kharkov

1. You can zoom in/out using your mouse wheel, as well as move the map of Kharkov with your mouse.
2. This interactive map presents two modes: 'Biking Routes' and 'Hiking Routes'. Use the '+' button on the map to switch between them.

This Kharkov map has two modes: 'Railway Network' and 'Landscape & Rural Map'. Use the '+' button on the map to navigate.

Overview of festivals and celebrations in Ukraine

Ukrainians celebrate Christmas according to the Orthodox calendar, on January 7th. This holiday is not celebrated with such noise and scope as the New Year. During its celebration, pagan rituals can be observed, especially in the countryside. Celebrants, sometimes in masks of animals, go caroling, that is, they go from house to house singing Christmas songs, and the owners of the houses treat them to sweets. It is interesting that from 2017 Ukrainians officially began to celebrate the Catholic Christmas on December 25th, which symbolizes Ukraine’s support for European orientation, and the adoption of European values. Anyway, two Christmases sounds great. … Open

Our guide to Kharkov

Holidays in Kharkov would be incomplete without a visit to local restaurants; some of them are very unusual and attractive places. One of the best restaurants in the city is Vzletayushiy Drakon; it specializes in Asian cuisine. The restaurant's menu is dominated by popular Chinese, Vietnamese and Japanese dishes, but there is a number of treats for fans of European cuisine. The restaurant has a beautiful banquet … Open

Traditions and mentality of Kharkov

Kharkov has a special charm due to its unique cultural atmosphere. It is the city with beautiful centuries-old traditions and rich cultural life. Local residents are cheerful and optimistic; they like to have fun and know how to do that. That’s why an abundance of fun-filled holidays is held there. Locals also feature a wonderful sense of humor; fans of excursions and walks will notice this feature of the … Open

In Kharkiv, there are a lot of beautiful religious monuments. One of the most impressive is St. Peter and St. Paul Church. It was built in 1866. Today, many tourists easily recognize this church due to its pinnacle and black dome. The old church is one of the few temples in the city that was not almost damaged during the Second World War. It was constantly open even in wartime. In 1996, the church was completely … Open

3. In restaurants and cafes you can leave a tip for good service; the sum making out 5 - 10% of the total would be appropriate. The service charge in upscale restaurants is often included in the total; it is rarely more than 10% of the total bill. 4. Tourists are advised to book tickets for sightseeing tours and cultural events in advance. You can order them at any tour desk or directly at the hotel; this way you … Open

Kharkov offers a large selection of beautiful parks. The Gorky Park and Shevchenko Park are considered to be the most fascinating ones, and in the warmer months, a family just won’t find a better place to stay. Shevchenko Park is famous for the exquisite design; its territory houses the Kharkov Dolphinarium. There is also an unusual monument to a soccer ball; every day it attracts sports fans making photos with … Open

Kharkov is ready to offer its guests a huge number of exciting excursions. Ancient streets and squares, famous historical sites and monuments, churches, museums, theaters and landscaped gardens are among its attractions. The largest square of the country is situated in Kharkov; we are talking about Freedom Square. The scenic square was founded in the first half of the 20th century; it is the main venue for national … Open