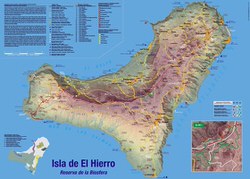 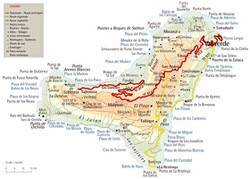 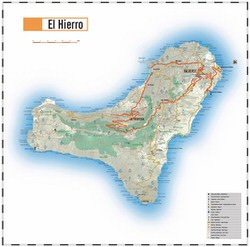 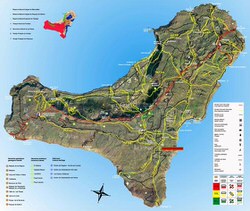 1. You can zoom in/out using your mouse wheel, as well as move the map of El Hierro Island with your mouse.
2. This interactive map presents two modes: 'Biking Routes' and 'Hiking Routes'. Use the '+' button on the map to switch between them.

This El Hierro Island map has two modes: 'Railway Network' and 'Landscape & Rural Map'. Use the '+' button on the map to navigate.

Our guide to El Hierro Island

The famous upscale hotel is Parador de El Hierro located in a very scenic and secluded area. It’s situated at the foot of the mountain Roque de Bonanza; just a few steps share it with picturesque coastline. Guests enjoy luxurious rooms with panoramic windows furnished in colonial style. A nice infinity pool and a garden with a cozy recreational zone, as well as the national cuisine restaurant and a stylish bar … Open

Playa de Arena Beach is equally popular with locals and guests of the city. This sandy beach has a well-developed infrastructure, and there are several charming restaurants and cafes in its territory. Playa del Verodal is usually referred to as the most beautiful beach on the island. It has amazing gold colored sand, but it is not that simple to reach the beach. Boat is the best way to get there, so there are … Open

The quietest and the most secluded places on the island are resort towns of La Caleta and Timihirake featuring gorgeous private coves and bays. All of them are fully protected from the wind and surrounded by amazing scenery, so travelers can successfully combine rest at the coast with scenic walks. The town of La Restinga is popular among fans of water sports and scuba diving; this is where the sports and diving … Open

La Deesa Forest is worth noting among the outstanding natural attractions of the island. It’s the only nature reserve in the world, where sabina grows. The size of this tree is pretty impressive, and its height can reach 8 meters. The tree has very unusual look, as its trunk is a complex web of branches; it’s simply impossible to confuse it with other rare tree. Hikers should definitely go to the Cape … Open

Maps of La Gomera
The island also has several excellent places for having a lot of fun at night. These include Bethermann Bar with its cozy atmosphere, Bataplan Club with a wide range of strong drinks and wonderful views of the beach. Cacatua and La Chalana bars are preferred by beer lovers, and if you're a connoisseur of excellent cocktails, you'd probably be happy to spend time in Zumería ... Open »
Maps of La Palma Island
By the way, if you like the sea and you don’t want to dive with special equipment, you can go for a voyage on a speedboat or on a kayak, if you want it to be more extreme. If you want to feel yourself as a ship captain, can ride a boat, and the fishermen would definitely like to go fishing on the shore as well as on a boat. Due to the high transparency of water, you can ... Open »
Maps of Los Gigantes
The best spa in town can be found on the grounds of the Hotel Los Gigantes. Tourists who cannot imagine their vacation without quality spa treatments would be incredibly delighted with its sauna and massage rooms, swimming in the pool, relaxing in the jacuzzi and enjoying fantastic views while taking a sunbath. It is worth noting that this spa is a favorite place for many ... Open »
Maps of Playa de las Americas
Among them it is important to pay attention to Nature Fish Spa center and, as it is possible to guess, their main distinction is the procedure with fish. Interesting evening program can be offered not only by different bars and clubs, but also restaurants. Many of them wait for guests until the dawn. On Sundays the excellent market works in the resort, where it is possible to ... Open »
Maps of Adeje
Another highlight in the list of local entertainment is horse riding, which is organized by local equestrian companies along the coast. The only condition - before the promenade on a horse, you should learn a horse riding courses. If you prefer to burn calories and explore resort's surroundings, take the advantage of the best transport here - mountain bike. Renting such a ... Open »
Maps of Canary Islands
The most extensive beaches of the archipelago are located at Fuerteventura; they are the most desolate and quiet too. The beautiful island is perfect for family holidays. In addition to the beautiful coast, there are many beautiful places to walk. Those who prefer to devote time to hiking around scenic places would admire the island of Lanzarote. This unique island is the ... Open »
Maps of Tenerife
Golfers are sure to enjoy vacations on the island, as all the major resort areas have their own sports centers. Travelers consider Golf Del Sur, Golf Costa Adeje, Amarilla Golf and Golf Las Americas to be the most popular. Attractive shops, restaurants, bars and night clubs can be found in all major cities of the island. As a rule, the most popular nightlife places and ... Open »
OrangeSmile.com - online travel reservation expert providing reliable car rental and hotel booking services. We feature more than 25.000 destinations with 12.000 rental offices and 200.000 hotels worldwide.
Secure Server