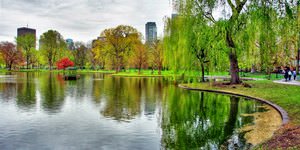 , has been famous for its posh interiors and excellent service since 1912. The hotel has been liked by many presidents of the United States and foreign celebrities. Moreover, the amazing interiors of the hotel can be seen in two movies. The Fairmont Copley Plaza was reconstructed not long ago, and in order to keep the original Boston style, the team of designers and builders were guided by professional historians and museum curators. The fourth floor of the building is occupied by the Fairmont Gold club zone that includes 8 thematic zones. This is a great place where visitors can feel the atmosphere and enjoy historic ornaments of the past Boston.
Check the hotel prices and availability
Liberty Hotel
Check on the map. From Boston center - 2.9 km
The intriguing history makes Liberty Hotel

a truly legendary place. Originally, the building of the hotel was constructed in 1851 as a prison. Much had changed since that time until the new owner decided to make a complete restoration and change the building into a hotel in 2007. Nowadays, the hotel is present in Starwood Luxury Collection, the list of most luxurious hotels in the world. Travellers will find there amazing luxurious guestrooms and the most modern amenities. Despite the fact that the hotel is located in a former prison, there is much symbolism in its name. Copyright www.orangesmile.com
Lenox Hotel
Check on the map. From Boston center - 0.7 km
Built yet in 1900, at that time Lenox Hotel

was one of the highest buildings in the city and was easily seen from many parts of Boston. Nowadays it’s a wonderful historic place, owners of which carefully preserve its heritage, look of inner premises and designer decoration of all guestrooms. Interiors are mostly made in classic style and feature elegant mahogany wood, crystal chandeliers, and antique items. Some guestrooms have real fireplaces. The hotel is liked by many famous people as during its long history Lenox Hotel was visited by such celebrities as Henry Ford, Michelle Pfeiffer, John Travolta and Enrico Caruso.
Top places to stay in Boston - most luxurious hotels
Fairmont Battery Wharf Boston is located in a complex of buildings not far from Boston Harbor. This region is often called “a small Italy” and it is surrounded by narrow winding streets …

Open
The Boston Park Plaza Hotel & Towers offers its visitors to enter the world of rich history, elegance, and exceptional service. The magnificent hotel was opened in 1927 and immediately it became popular thanks to its sophisticated design of guestrooms and halls. The Boston Park Plaza is liked by American presidents, celebrities, and rich people. After a recent renovation, the hotel has become even more glamorous and never ceases to unleash its excellence and mesmerizing charm. There are several high-class restaurants in the hotel, so guests will not need to call a taxi or walk somewhere, searching for a good meal. The Boston Park Plaza Hotel & Towers is a respected hotel that is present in the list of the best historic hotels in the United States.
The Langham Boston Check on the map. From Boston center - 0.4 km
Another interesting place, The Langham Boston

is a true architectural landmark built in 1922. Originally, the building was occupied by Federal Reserve Bank. Nowadays, this is a luxurious, aristocratic hotel with the carefully preserved atmosphere of the past days, but at the same time the hotel features all modern amenities of the 21st century. The hotel’s bar, Julian, is a former reception hall of the bank, where one still can see original wall paintings by N.C. Wyeth. This is one of the most beautiful places for relaxation in whole Boston.
Check the hotel prices and availability

Search hotels in Boston for your taste

Famous hotels in the region of Boston

New York
The magnificent hotel inspired many talented people. For example, Jack Kerouac wrote several books while staying there. There are several funny stories connected with the name of the writer. Kerouac felt inspired all of sudden, and it could happen anywhere, so he had to write on any piece of paper available. That is how he used a 36-meter long roll of toilet paper – it took ... Open »
OrangeSmile.com - online travel reservation expert providing reliable car rental and hotel booking services. We feature more than 25.000 destinations with 12.000 rental offices and 200.000 hotels worldwide.
Secure Server