Video of flights over top monuments of Warsaw in HD format.
Use 'Full Screen' mode.
Royal Castle, Carmelite Church, Baths Palace, and St. Anne Church are the architectural landmarks for not only tourists, but also for residents of Warsaw. The majority of these monuments were created several centuries ago. They witnessed many important events, so besides the architectural value for Poland, these landmarks are of a great historic importance. In this review, you will be able to get acquainted with the main architectural sites of Warsaw. Also, we will look at them from an unusual point of view – only interesting facts and photos, which come together with a 3D visualization of every monument. Use our unique technology to fly over all architectural places of interest of Warsaw – the video is at your fingertips. 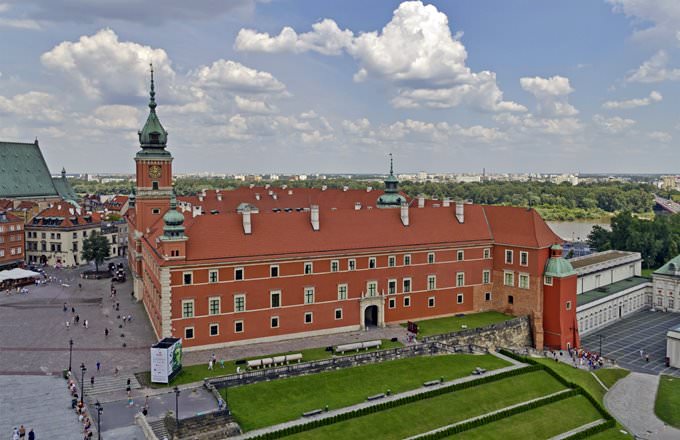 Facts:
» The Royal Castle is the architectural and historical monument built in 1598-1618 by the order of the King of Poland and Grand Duke of Lithuania Sigismund Vasa at the site of a medieval castle of the princes of Mazovia.
» The palace was built in shape of a pentagon and attracted attention with its 60-meter Sigismund’s Tower.
» The building of the royal castle, which we see these days, is a reconstruction of the castle burned in 1939 and blown up by the Germans in 1944.
» The castle is a monument of national culture, the place of exposure of permanent and temporary exhibitions of ancient art, but also a place of formal meetings, a venue for concerts, workshops and the like.
» Currently, you can see paintings by Rembrandt and Matejko, old views of Warsaw by Bellotto, and the urn containing the ashes of Tadeusz Kosciuszko in the palace museum. 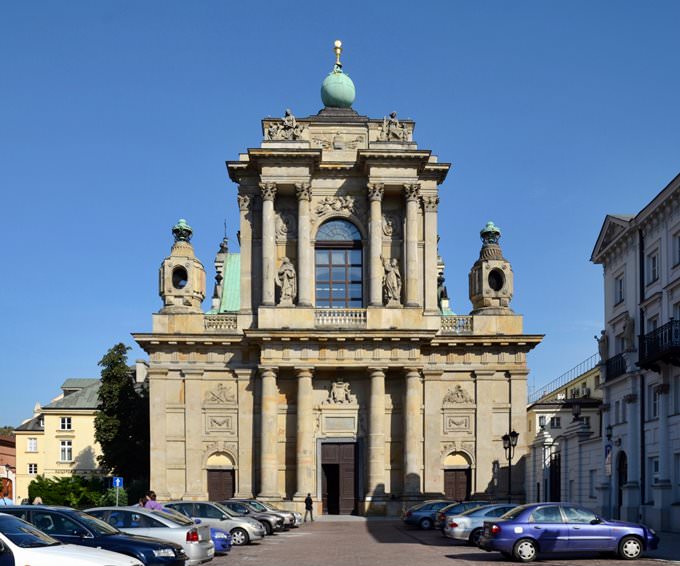 Facts:
» The Carmelite Church is located in the historic center of Warsaw, in the Krakow suburb. This is one of the most famous churches in the city constructed in Baroque style with elements of Rococo and Classicism.
» The church was built in shape of a Latin cross with main and two side naves.
» The main portal of the church is decorated with carvings of black and greenish marble, and the coat of arms of the Princes Radziwill is placed over the portal.
» There were two bell towers on each side of the façade; new bells were installed in 2000.
» The facade is topped with a copper sphere with the gilded hostia on it.
» Interior of the church is adorned in style of Late Baroque with Rococo elements. The walls and the main altar of the church are decorated with paintings by the famous painter of the 18th century, Shimon Chekhovich and Polish artist Franciszek Smuglevich. Gilded ceiling is decorated with gorgeous stucco. 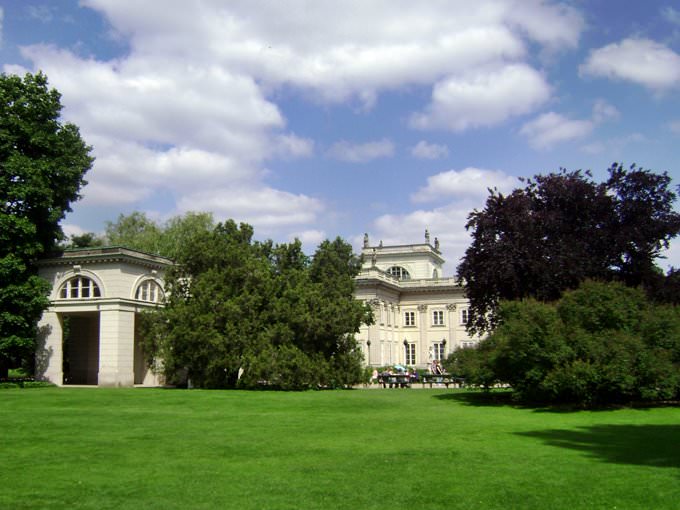 Facts:
» The Baths Palace, also known as the Palace on the Water is the small residence of the last Polish king Stanislaw Poniatowski on the artificial island in Lazenkovsky Park.
» The palace was built for King by Domenico Merlini in early Classical style in 1784 - 1795 years.
» Interiors of the palace along with an art gallery famous for its paintings by Rembrandt and Rubens were completely destroyed during World War II. After the war intensive restoration and reconstruction work begun; it ended only in 1964.
» Severe facade of the palace is compensated with luxurious interior decoration featuring shades, crystal chandeliers, mirrors, sculptures, Chinese and European porcelain.
» The Lazenkovsky Park (76 hectares of gardens) boasts numerous lakes, fountains, greenhouse, gazebo, mansions, statues and even a Greek amphitheater. 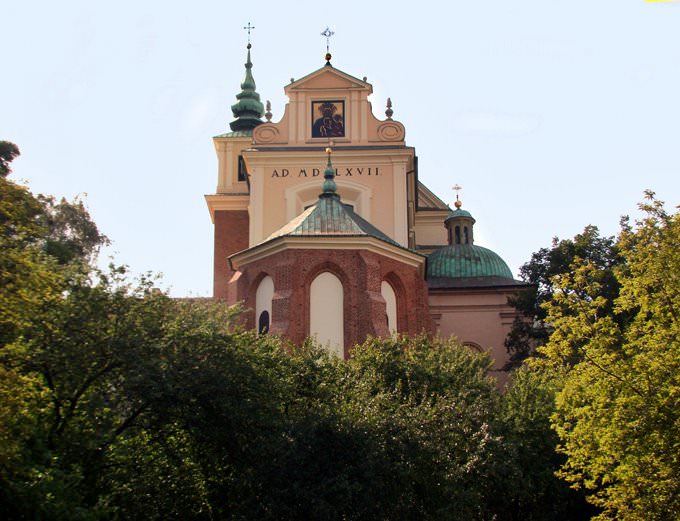 Facts:
» The St. Anne Church is the active Catholic church built in the beginning of the 16th century on the site of the burnt Gothic church.
» The temple was rebuilt and remodeled several times, so it’s a mixture of different architectural styles, including late Gothic (the altar), high Baroque, neo-Renaissance and Classicism (the bell tower).
» Facade of the church is decorated with classical statues of the four evangelists Jakub Monaldi and Franciszek Pintska.
» Interior of the church is performed in style of high Baroque. The temple has several chapels. The Loretto Chapel is the place for burials. The walls and ceiling are decorated with frescoes.
» The St. Anne Church has the only one crystal dome in Warsaw, which can be seen in the monastery on the way to the sacristy. It was made in 1514 by the architect John of Komorova. 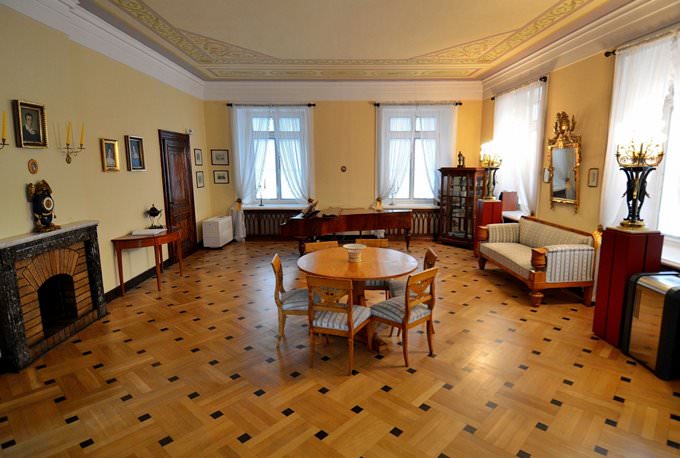 Facts:
» Czapski Palace is the baroque palace in Warsaw located in the historic center of the city in a suburb of Krakow.
» At different times artist Zygmunt Vogel, composer Frederic Chopin, poets Zygmunt Krasinski and Cyprian Kamil Norwid have lived there.
» The palace now is housing the Warsaw Academy of Fine Arts.
» The Museum of the Academy of Fine Arts has 30,000 works of art: painting, sculpture, graphics, drawings, posters, works of artistic crafts and industrial design.
» The courtyard of the palace houses a copy of the equestrian statue of the Venetian condottiere Bartolomeo Colleoni by Andrea Verrocchio.
» The southern wing of the palace houses the small Chopin family saloon furnished with antique furniture and personal belongings of the composer; it occupies a large room on the 3rd floor. Facts: » The Field Cathedral is the garrison church and cathedral of the Field Ordinariate of the Polish Army.
» The church has organs of the 19th century and the images by Michael Willmann, the famous German painter of Baroque style. The Mausoleum of the defenders of the fatherland is to the left and the Katyn Chapel is situated to the right.
» In 1835 - 1837 the church was rebuilt and adapted to the Orthodox liturgy. Baroque decoration was deleted and bells were hung in towers.
» After the restoration of independence in 1919, the Polish authorities have returned the church to the Catholics, and intended it for the department of the Polish Army.
» The church was badly damaged during the war, but it began to recover in 1946 - 1960 under the leadership of Leon Marek Suzin.
» During the war, the statue of the Virgin Mary Queen of Poland has miraculously survived.

CONTINUE - PART II »»
This guide to architectural sightseeing in Warsaw is protected by the copyright law. You can re-publish this content with mandatory attribution: direct and active hyperlink to www.orangesmile.com.
Warsaw - guide chapters 1 2 3 4 5 6 7 8 9 10 11 12 13 14 15

Build your walking routes in Warsaw on the landmark map Architectural landmarks in the regions around Warsaw