The landmarks of Trier are not limited to the presented 6 architectural sights. A curious traveler will find thousands of exciting places here. However, below we present the most impressive and striking architectural sights of Trier, which should be noted at first - Cathedral of Trier, Basilica of Constantine, Porta Nigra, Roman Bridge, Church of St. Paulinus and many others. In this unusual virtual tour, you will see the photos and read the facts on each monument. But, most importantly, you will be able to fly over each landmark, and to see the whole architectural ensemble of Trier in 3D format from the sky.

Facts:
» The cathedral dates back to 320.
»  The Roman warlord Constantine ordered to build a cathedral. The Empress sacrificed her palace for the construction. There are still its remains in the foundation.
»  The Normans almost destroyed the building in 882. It started to be restored in 1196.
»  Originally, the building was built in the Roman style. At the beginning of the 18th century, clergymen decided to add baroque elements to the facade.
»  In 1723, the altar was placed here. The walls are decorated with carving and relief pictures.
»  When Christ was crucified, his dress was town into 4 pieces. The altar contains the piece of the martyr’s chiton (a sleeveless shirt).
»  For 17 centuries, worshipers had seen the dress only 16 times, in 1996 for the last time. This was due to the material.
»  In the late 20th century, the organ appeared in the hall.
»  There are a lot of cult relics in the shrine of Trier. In the sacristy, there is the preserved link of the chain, by which Apostle Peter was bound. The iron rod from Christ’s body and the shoes of St. Andrew the First Called are attractions too.
»  In the underground shrine, there are the relics of St. Helena and arks of church bishops. 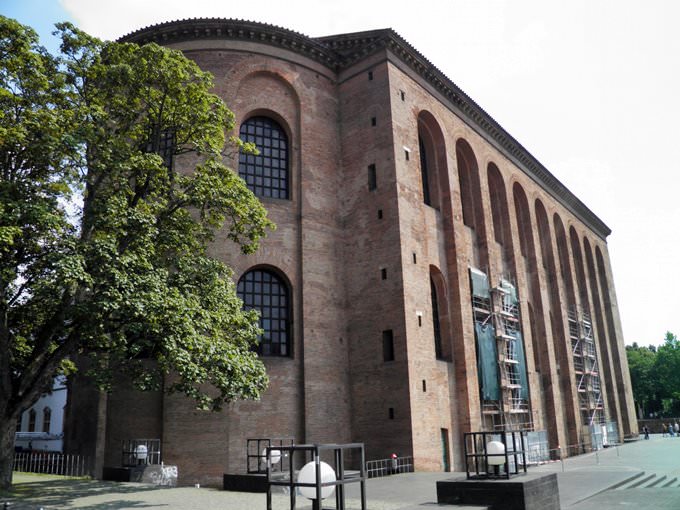 Facts:
» The Basilica of Constantine is the monument of the past because there is the preserved old throne hall.
»  It is 67 m long, 26 m wide, and 33 m high. The floor is covered with black-and-white marble tiles. It is heated. The heating system is also integrated into the walls. Wall panels are inlaid with natural stone. Windows are adorned with mosaics. There are statues in the niches. Foreign guests were welcomed here.
»  The building built in 310 served as the residence of the first Christian Emperor. It is named after him.
»  The residence was not reconstructed many times, even though it changed many owners.
»  The big house is built of red bricks. The masonry is plastered.
»  The age of the Roman Empire was changed by the period of the reign of Frankish kings that loved staying here. In the 12th century, the local diocese occupied the palace. In the 17th century, Aula Palatina became the part of the prince’s castle. The army of Napoleon used its rooms as barracks. In 1856, the building served as an Evangelical refuge, the Church of Our Savior.
»  It had existed for 1500 years but was blown up during the Second World War. The ancient building was reconstructed in 1956.

Facts:
» Porta Nigra is translated as “The Black Gate”.
»  The fortress built in 180 has survived since the period of the reign of the Roman Empire.
»  Trier of that time was surrounded by a high defensive cordon. There were four entries. The walls are 36 m long and 30 m high.
»  Nigra was built of light rock. 7.2 thousand pieces of the monolith were used to construct a unique object. Each stone weighs about 6 tons.
»  No one knew about cement at that time. Stones were thoroughly linked and fixed with iron clamps, for which special holes were made. Niches were filled with melted tin.
»  Despite the long history of its existence, multiple raids, and looting, the fortress has remained undamaged.
»  The legend says that the longevity of the fortress is associated with the name of the monk. He had lived here until 1035. The hermit was buried under one of the fortress walls by his will.
»  Later, the church named after Saint Simeon was built here. The Emperor did not like the religious shrine. Napoleon ordered to destroy it.
»  Today, there is a museum in the territory of the complex. 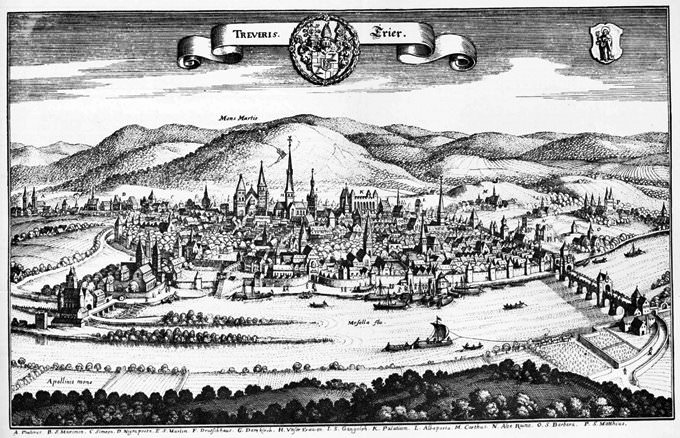 Facts:
» The Roman Bridge that is also called the Bridge of the Moselle has been a river crossing construction for two millennia.
»  Nine objects constructed in the 2nd century AD were mentioned in the annals.
»  The city was the part of the Roman Empire at that time. That is why the bridge is called like this.
»  It was wooden and supported by oak piles.
»  In 45 AD, stone pillars were added to the bridge. You can see them when the level of the river is low.
»  The durability of pillars is ensured by construction materials used in the past. The pillars are faced with basalt panels. The volcanic rock protected finishing slabs from damage.
»  Columns is narrowing where the river rises, which does not let melting ice and floods shatter the construction.
»  In 1689, the French army blew the bridge up.
»  At the beginning of the 18th century, it was restored.
»  Nine pillars are still functional and supporting the intense highway for vehicles and pedestrians that is 10 m wide. The platform is 14 m above the water level.
»  The facade of the central support span depicts St. Nicholas and the Crucifixion of Christ.

Facts: » During the development of Christianity, legionaries refused to sacrifice to pagan gods. They paid for this. They were executed in Trier. Seven thousand martyrs were killed with the sword.
»  One of the temples was built in the place of execution and was called the Church of Great Martyrs. Now, it is called the Church of St. Paulinus.
»  The first church dates back to the 4th century. The Bishop of Trier preached to irreligious people about the Christian faith. When the preached died in 358, his bones were delivered to the Church of St. Paulinus.
»  A few years later, the monastery was built around the House of God.
»  In 882, the Normans looted the building. In 1093, the fire left only the part of the complex.
»  At the beginning of the 12th century, it was decided to reconstruct and bless the church.
»  The church has flourished for five centuries. The army of Louis XII destroyed the consecrated place.
»  The church was rebuilt in 1757. The interior impresses with wall painting by great masters that is dedicated to the life of St. Paulinus. Sankt Paulin Kirche is an architectural monument. The exterior of the building combines different architectural styles of the past, baroque and rococo. Facts: » The imperial abbey is one of the oldest monasteries in Western Europe.
»  It was named after the clergyman Maximin when the bishop died in 353. The crypt with the clergyman’s body has survived to this day. You can see the sarcophagus in the courtyard of the monastery.
»  The temple was built in the 4th century. The complex is located near the city market square.
»  Over the years of its existence, the building was repeatedly damaged by the fire and looted during the war.
»  In 1674, buildings of the church complex were demolished. They were rebuilt by a new plan. During the Second World War, the houses were destroyed again. The original exterior has not been preserved.
»  Only the central entrance and the church has remained undamaged. The religious building served not only as the House of God. There are barracks for soldiers and cells for prisoners.
»  In 1996, the territory of the abbey became the property of the private person. Now, there is a concert hall that can accommodate 1 200 guests and the Catholic school in updated rooms.

This guide to architectural sightseeing in Trier is protected by the copyright law. You can re-publish this content with mandatory attribution: direct and active hyperlink to www.orangesmile.com.
Trier - guide chapters 1 2 3 4 5 6 7 8 9 10 11 12 13

Build your walking routes in Trier on the landmark map

Architectural landmarks in the regions around Trier

Luxembourg
The cathedral was named after the Mother of God in 1848. In 1613-1621, the building located in the southern district belonged to the Jesuits. In 150 years, when members of the Order were exiled outside the country, the church was given the icon of the city patroness. The house of God was named Notre-Dame Cathedral after her. It had been constructed for 8 years since the beginning of the 17th century. The updated interior is designed in ... Open »
Aachen
The Roman Emperor wanted to build a palace with a prayer room. For this, architects from Rome and Byzantium were invited. Charles the Great was buried here. The sacred place with his remains has survived to this day. The prayer room is octagonal. Arched vaults are decorated with colorful stones. Wall panels are covered with mosaics. A 12-m forged chandelier is lead. It symbolizes celestial Jerusalem. It was gifted by Frederick ... Open »
Mainz
It’s truly impressive how architects of the first millennium were able to erect houses of great height and scale. The building is 116 meters long, and the tower is 83 meters high. It took more than 200 years to build the cathedral (975-1239), which was connected with the fire that destroyed the structure and looting during wars. The cathedral is faced with red sandstone which contrasts with the chapel built of light blocks. There are ... Open »
Liege
The city Catholic cathedral is named after St. Paul. It received the status of a cathedral in the 19th century. Local worshipers asked Napoleon for this. The treasury of the church was enriched with artifacts from other destroyed temples. The relics of Saint Lambert are kept here. The founder of the church is bishop Irakli. The building acquired its modern appearance in the 13th-15th century. There are also side belfries. In 1812, ... Open »
Cologne
Cologne Cathedral is one of the world's most famous Roman Catholic cathedral built in the Gothic style. The cathedral reaching a height of 157 meters is ranked third in the list of the highest churches in the world and listed as a World Cultural Heritage. Construction of the temple was carried out in two stages, in 1248-1437 and in 1842-1880. The temple was rebuilt and restored several times. Near Cologne Cathedral there are ongoing ... Open »
OrangeSmile.com - online travel reservation expert providing reliable car rental and hotel booking services. We feature more than 25.000 destinations with 12.000 rental offices and 200.000 hotels worldwide.
Secure Server