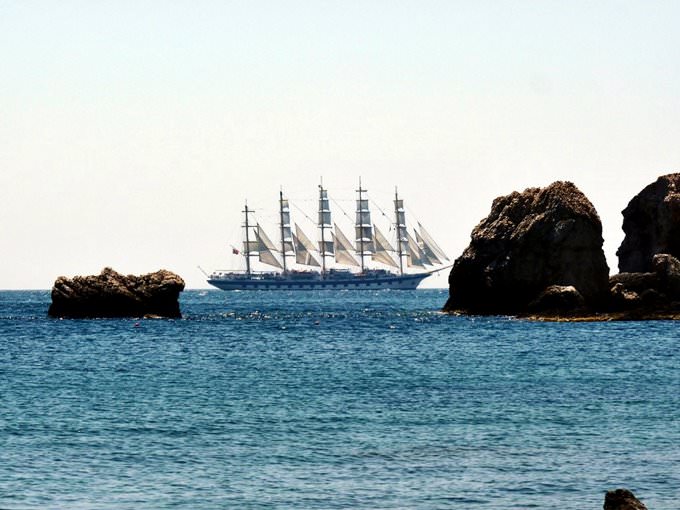 Antique structures located in Taormina are of huge historical value. The oldest building is the Greek Theater (Teatro Greco

). It was erected shortly after the founding of the first settlement, in the 3rd century BC. As it was found out by scientists, more than two thousand years ago on the site of the theater there was an impressive limestone mountain, which was literally moved by the locals before the construction began. During the reign of the Roman Empire, the theater was used as a venue for gladiatorial games. Being the second largest theater in Sicily, it can accommodate more than 10,000 spectators at one time.
Photogallery of Teatro Greco:

Top hotels in Taormina for business trip or short vacation
Taormina is famous for its amazing historic hotels, the atmosphere of which is unique and attractive. One of the most prestigious hotels in the resort is San Domenico Palace occupying a …

Open
The Roman Odeon (Odeum), an architectural monument of a later period, has been preserved in the city. The miniature indoor theater can accommodate up to 200 people. In ancient times, structures of this kind were used for holding solemn events and musical performances. Another interesting Roman monument is the Naumachie (Naumahiya), a historic basin of impressive size that had been also used for gladiatorial fights. The basin's diameter is more than 120 meters, and the depth is about 5 meters. During the tour, in the wall, you can see nicely preserved niches that once contained statues.
Besides amazing ancient buildings, Taormina is rich in beautiful medieval monuments. Fans of excursions should definitely see the city's main religious landmark - the Cathedral of St. Nicholas (Dom San Nicolò). It was built in the beginning of the 15th century on the site of an old destroyed church, which bore the name of Nikolaos the Wonderworker. In front of the spectacular cathedral, there is an equally spectacular square with an old baroque fountain built in 1635. Copyright www.orangesmile.com
Guide to Taormina sightseeing - things to see and to visit
The picturesque resort town of Taormina is one of the oldest on the Sicilian coast. The first mention of the Greek settlement of Tauromenion dates back to the 4th century BC. According to …

Open
Another outstanding 15th-century monument is the Church of St. Augustine (San Agostino Church). The history of its appearance is very symbolic: during the early Middle Ages, the plague struck the city, and soon after its end local residents decided to build a beautiful Gothic church. The building existed in its original form until the beginning of the 18th century. During a large-scale reconstruction, the appearance of the church has changed significantly. Today, the beautiful building with preserved Gothic elements houses a city library. 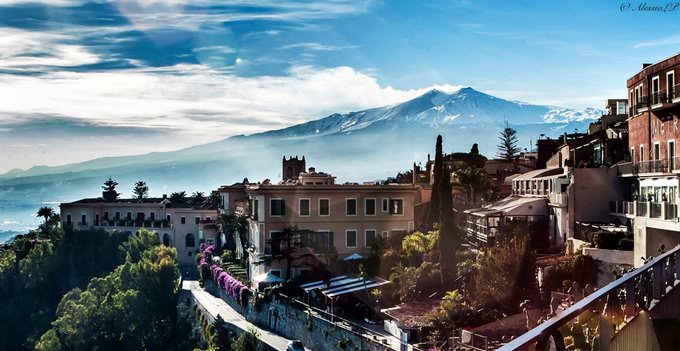 A true example of the Baroque style is the Church of St. Pancras named after the patron saint of Taormina. Built in the 16th century, it houses many unique frescoes. It is noteworthy that the church was built on the ruins of an ancient temple. The most curious travelers should definitely climb to the top of Mount Tauro

). It can be safely called the most unusual religious landmark - the Madonna della Rocca was carved right in the rock, its construction was completed in 1648.

Your active city break in Taormina. Attractions, recreation and entertainment - best places to spend your day and night here
Undoubtedly, the main entertainment of visitors to the picturesque resort is beach recreation. You can also diversify leisure activities by walking, visiting attractive shops and …

Open
Taormina is also famous for its amazing architectural sights, there are many spectacular palaces and villas here. One of the most interesting of them is Corvaja Palace (Palazzo Corvaja

), whose appearance is an amazing mix of Byzantine, Arabic and Norman styles. Not less attractive is the Palace of the Dukes of Santo Stefano(Palazzo Duca di Santo Stefano

), whose age is more than 600 years. At present, the completely restored palace is used for holding cultural events, and some of its premises are converted into a museum acquainting visitors with the work of the great sculptor Giuseppe Mazzullo.

In the section below, you can get one of our excursion, activities or city discovery tours over Taormina and surroundings. Our website offers 10-30% lower ticket prices, when compared to the offline purchase on the spot.

This guide to cultural sights Taormina is protected by the copyright law. You can re-publish this content with mandatory attribution: direct and active hyperlink to www.orangesmile.com.
Taormina - guide chapters 1 2 3 4 5
Reference information
Map of all churches

Cathedrals and basilicas near Taormina
♥   Basilica Cattedrale di Maria SS. Annunziata, Acireale, 29 km from the center. On the map

♥   Basilica di S. Sebastiano Martire, Acireale, 29.2 km from the center. On the map

Unique spots in Taormina and near Distance from Taormina center - 28.8 km.
One of the main distinguishing features of the largest volcano in Europe is presence of many side craters; lava erupts from them every 2-3 months. According to statistics, major eruption occurs every 150 years. Etna has destroyed many nearby villages and killed thousands of people during thousands of years. The slopes of the volcano and its immediate neighborhood currently feature numerous settlements; people consider them comfortable and attractive place to live. … Read further Distance from Taormina center - 0.3 km.
If you stay at one of the spectator places of the ancient theater, you can admire the picturesque panoramic view of the coast and Etna volcano. The amphitheater in Taormina was significantly expanded in the era of ancient Rome. In its arena bloody battles of gladiators were held. Modern travellers will also have an opportunity to touch the culture of ancient times. The ancient arena remains a permanent venue for interesting cultural events. For several years the amphitheater has been used for the international festival of arts "Taormina Arte". … Read further

Photogallery of cultural heritage of Taormina

Excursions over cultural sights of neighbours of Taormina

Calabria
Incredibly interesting from a cultural point of view is the city of Reggio Calabria, which is often called the birthplace of Italian Art Nouveau. Curious travelers should definitely look into the National Museum representing a rich collection of archaeological artifacts; many of them are dated back to the times of ancient Greece and Rome. The wonderful town of Serra San Bruno ... Open »
Messina
A religious monument of local significance is Santissima Annunziata dei Catalani founded in the 12th century. The construction of this church was initiated by the Norman conquerors, who have managed to conquer Sicily in the 12th century. Since its founding, the church has been an important religious site for the townspeople, so a hundred years later, it underwent a major ... Open »
Lipari Island
Enjoy the ancient atmosphere of the capital of Lipari with its narrow streets and small houses. Visit a small village Canneta. There are some stone quarries, where local citizens worked a few hundred years ago. Visit the Church of St. Joseph and the Church of our lady. Find the remains of ancient settlements and villas. Walk along the coast of the port, which was an ... Open »
Salina Island
Italians are people of a hot temper. They raise voice, use a lot of hand movements, changing their expression. It is customary to apologize, even if you are not guilty, Italians appreciate this behaviour. Italians are very religious and superstitious people. Salina Churches are full of people at Christmas, Easter and Epiphany because customs and traditions are very important ... Open »
Sicily
The most striking monument of the Middle Ages is the Dome Cathedral, which attracts travelers with a unique harmonious atmosphere and beautiful architecture. Cathedral has preserved perfectly to this day. The main decorations of the interior are beautiful vaulted ceilings. Obligatory part of excursions is the tomb of Archimedes located in Syracuse. The exact date of the ... Open »

Culture guide to Taormina. Which fascinating sights to visit once you are in Taormina: temples, churches, museums, theaters and castles. Recommendations (with addresses, phone numbers and links) on the places 'must visit' in Taormina. Plan your own city excursion by using this page info!