Religions and languages in Switzerland 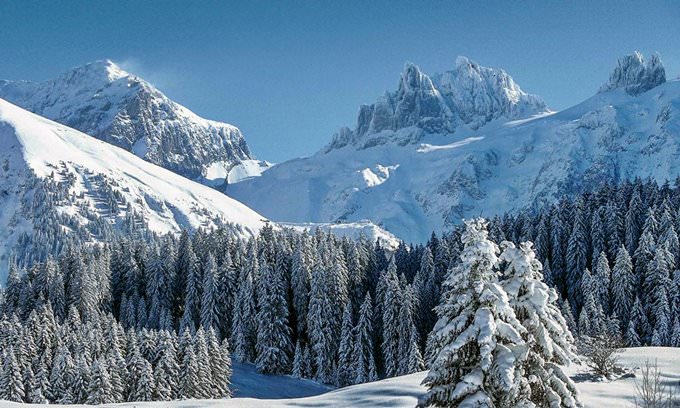 Switzerland is one of the most democratically developed countries in the world. That is why the state language here isn’t just one. There are three of them, German, French, and Italian. In these languages, state legislative acts are drawn up and meetings with federal government bodies are held. Most of Swiss speak the German dialect, Schweizerdeutsch. About 20 percent of the population speaks French. It is distributed in the adjoining lands of Geneva, Friborg and Valais. No more than 5 percent of Swiss citizens speak Italian. Even Rhaeto-Roman has the status of the national language. It is considered a derivative of the old Latin language, and only about 1 percent of the population speaks it. It is distributed mainly in the mountainous region of Graubünden.
What you need to know about Switzerland prior to visit - advices
1. Switzerland is not part of the European Union. This country has its own currency, francs. It's better to change money in banks, as they offer the …
Read further
Historically, Switzerland has an extremely religious population. Christianity has always had a huge impact on the development of the state, although it was divided into the Catholic and Protestant regions. To date, the church is completely separated from the state, and the country is recognized as absolutely secular. Citizens of the country are free in their religious preferences; the state isn’t engaged in the propaganda of a certain religion. Statistics show that about half of Switzerland population considers themselves to be believers. Such holidays as Easter, Christmas, and the Assumption of the Virgin are celebrated in every city. Moreover, even the religious strata of the population are absolutely not fanatical. They almost do not attend temples and churches, because of what perishes suffer a significant decline and gradually close. State support does not apply to them.
The number of Catholics and Protestants in the country is almost the same. Catholic faith is more prevalent in the central and southern parts of Ticino. Virtually all major cities, including Bern, Zurich, and Geneva adhere to Protestantism. The disputes of these two faiths have ceased long ago, and now citizens can get along with each other. Although a few centuries ago, real bloody trials were played out because of religion. Modern Swiss people are absolutely tolerant to any existing religion on earth, so Jewish, Hindu, Buddhist, and Muslim communities form there. About one and a half percent of residents are Orthodox Christians. Copyright www.orangesmile.com Old-fashioned furniture, paintings and tapestries, fine frescos and precious jewelery - all this can be seen in the castle nowadays. One of the most ... Read all
All unique sightseeing Switzerland

Photogallery of iconic places of Switzerland

Zurich
Zurich is the most important administrative center of Switzerland and the financial capital of Europe. The very name of a metropolis is associated exclusively with the word "quality", and not without reason. Zurich has headed various prestigious ratings, which almost every year awarded it the status of a city with the … Read more

Geneva
Escalade, which is celebrated each December, is one of most famous and colorful national holidays. A large historical procession is the culmination of the festival. The townspeople dress up in medieval costumes and walk on main city streets with an orchestra consisting of flute and drum players. Hot red wine is … Read more

Luzern
The main events of the festival are grand marches or mask parades. Traditionally there are two parades during the Carnival. The first one is considered to be official and austere. The representatives of different non-governmental organizations and guilds are commonly participating in the march. Tourists are commonly … Read more

Interlaken
Festivals in Interlaken are always fantastic and unforgettable events that you will definitely not want to miss. At the beginning of June, vacationers will find it very interesting to visit the event named Greenfield. It lasts three days. This is the time when the festival’s venue (namely, Flugplatz military base) … Read more

Basel
The end of October is the time for a large gastronomic fair, on which the local companies show off their products. Travellers really enjoy purchasing delicious Swiss cheese, dairy products and sweets from street vendors at very competitive rates. If you’re an art lover, the best time to visit Basel is June, when the … Read more

Locarno
Townspeople are big fans of such holidays and always take an active part in them. Their behavior may even seem strange to many foreigners since it is not at all associated with the restrained nature of local residents. Here, it is extremely rare to witness excessive emotions or see people chatting with each other in … Read more

Switzerland: traditions in the regions