The landmarks of Strasbourg are not limited to the presented 7 architectural sights. A curious traveler will find thousands of exciting places here. However, below we present the most impressive and striking architectural sights of Strasbourg, which should be noted at first - Eglise Saint Paul, Saint-Pierre-le-Jeune Church, Saint Thomas Church, Palace of Europe, Museum of Modern Art and many others. In this unusual virtual tour, you will see the photos and read the facts on each monument. But, most importantly, you will be able to fly over each landmark, and to see the whole architectural ensemble of Strasbourg in 3D format from the sky. 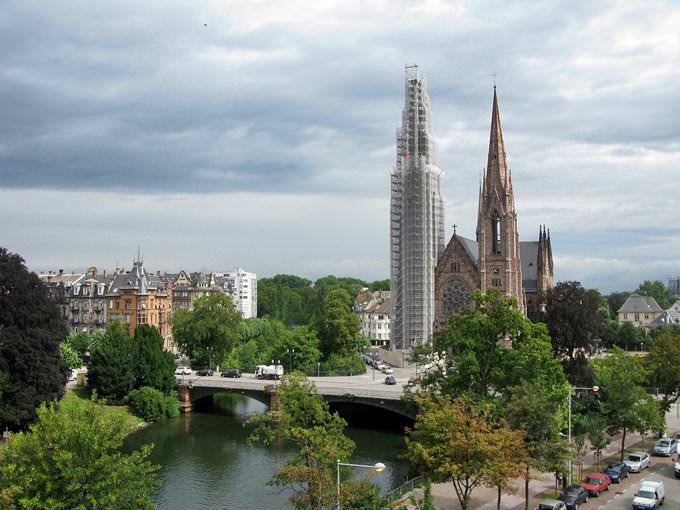 Facts:
» The 76-meter church is distinguished by two thin spires. They are thin not by accident and emphasize the height and significance of the construction.
»  It also features 16 entrances. Originally, the building served as the house of worship for German military units in the city. There are 16 entrance doors, just like garrisons.
»  During the service, the building can accommodate up to 3 000 worshipers.
»  There are two lodges on both sides of the pedestal for the choir. One of them is used by the Emperor’s family and the other one - by the city authorities.
»  There are separation hallways inside. Between them, there are wooden seats for worshipers.
»  Wall panels are decorated with religious paintings.
»  The picture created by stained glass windows depicts Christ and his followers. The original windows have not been preserved. Some of them were broken by airstrikes during the Second World War. The heavy hail broke the extant ones. All the stained glass windows of the church are new.
»  The sonority of the organ (1897) was not enough for St. Paul Cathedral. It had been restored for 6 months.
»  It started to be built in 1892.
»  The construction lasted 5 years. 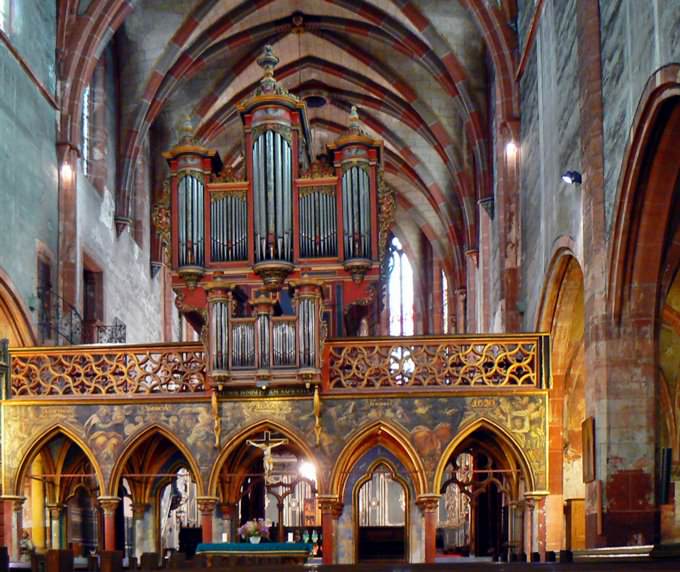 Facts:
» The church was built in the 7th century.
»  It is the last shelter of rich and important persons. There are underground crypts.
»  Frescoes, wall and altar paintings have been also preserved. In the temple, there is the sonorous Saint-Pierre-le-Jeune organ of the 18th century.
»  The building was built in two stages. The part of it was completed in the 7th century. The rest had been constructed for 200 years.
»  It is faced with red sandstone. At the entrance, there is the statue of the hermit monk Eugene de Foucauld. He was canonized by the Roman Catholic Church.
»  The copper dome is 50 m high. Frescoes and paintings on the altar have been preserved.
»  The vault is supported by carved pillars. The main theme of them is Biblical scenes about the Apostle Mark fighting with a dragon.
»  The organ was specifically ordered for the church. The room is illuminated with a big chandelier.
»  Strasbourg was a part of both France and Germany due to political disagreements. Catholic Saint-Pierre-le-Jeune Church belonged to different countries too. So, both Catholics and Protestants consider the church as the House of God.
»  It was blessed by Pope Leo IX in 1053. 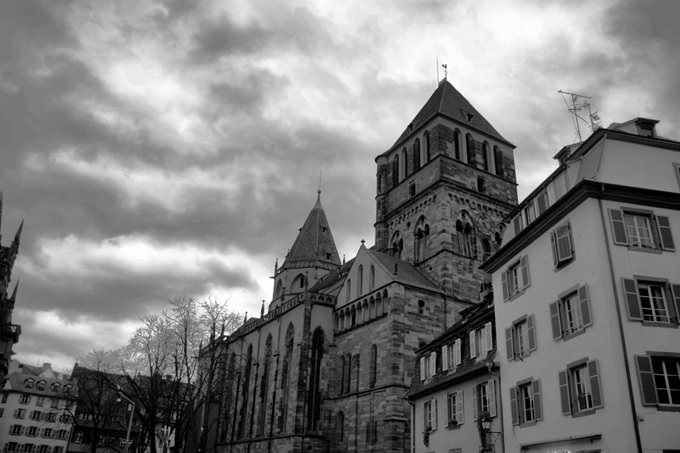 Facts:
» In Saint Thomas Church, services started to be held in a new way: the liturgy began from the church choir.
»  The temple has been Protestant since the 16th century.
»  Here, the organ Mozart played has been preserved. Organ concerts have been traditionally organized since that time.
»  The building is faced with pink sandstone.
»  Its halls are large and the naves are 65 m high.
»  Over the years of its existence, the church had been damaged by multiple natural disasters. It was burnt and struck by lightning.
»  In 1196, after being completed the house resembled a fortress but not the House of God due to its heavy constructions. The construction lasted over 300 years. Its architectural style is late Gothic.
»  The church has two bell towers, rectangular and hexagonal. There are clock towers near it.
»  In the temple, there are a lot of tombs of eminent persons of the city. In one of the sarcophagi, the bishop founding the church lies. There are an inscription and patterns on the sandstone plate. The original pedestal is supported with four stone lions. The gravestones are decorated with sculptures. 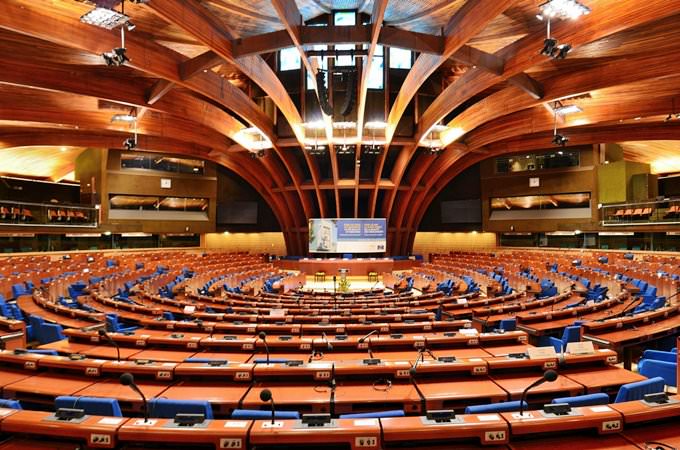 Facts:
» In the city, there is the complex of buildings of national importance. It includes administrative EU institutions. There are the Palace of Europe, the European Parliament, and the Human Rights Building.
»  The first state institution is the rectangular construction of the 70s of the last century. Meetings are held in the semi-oval hall. The dome has the shape of a fanciful seashell.
»  There are a lot of windows and glass partitions inside. In the Palace, there are also 17 rooms. There are up to 1 000 offices.
»  The facade of the building is made of pink sandstone. It is decorated with emblems of countries joining the Council of Europe. The organization includes some other constructions.
»  There is a stele in front of the main House of Governmental Power. It reminds of the prisoners of Auschwitz.
»  There is the ensemble of sculptures on the lawn. Every statue has been donated by a friendly country.
»  The building of the European Parliament is built of glass and concrete. It resembles a tower with its silhouette.
»  There is a courtyard in the complex. 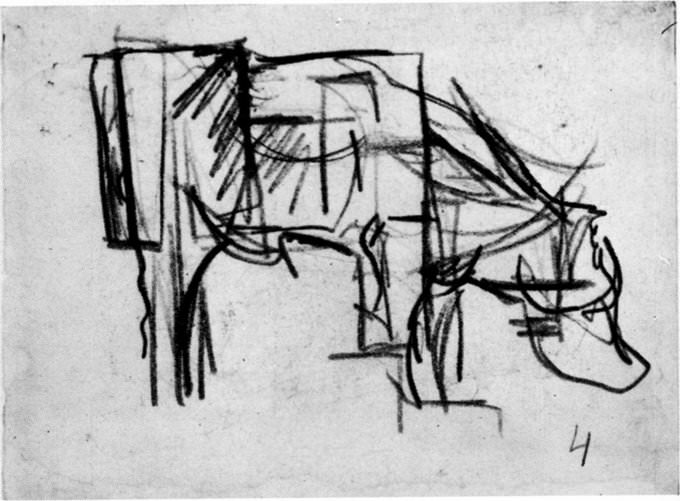 Facts:
» The Museum houses the collection of pieces of modern and contemporary art.
»  It was not planned to collect them. The rich patron presented his private collection of paintings to the city on his own will. Then, other French galleries made gifts.
»  As the collection was expanded, it required a new building.
»  The fund of the cultural institution includes almost 19 000 pieces of art and is constantly replenished.
»  It was opened in1998. The house resembles a glass cube. It is spacious, which lets view the exhibits closer.
»  The old ones date back to 1870.
»  The first sector is dedicated to modernists. There are canvasses of Claude Monet, Gauguin, Renoir, Pablo Picasso, Marc Chagall, and Kandinsky. This list is not complete.
»  The collection of the illustrator of the 19th century, Gustave Dore (he had no classical education) is the biggest in the country and includes 350 canvasses.
»  The second sector is dedicated to those who create in a new and modern way.
»  The third one presents 15 000 sketches and graphics.
»  The last sector is used for photos. There are the first pictures when this form of art had just appeared.
»  Not only permanent, but also traveling exhibitions are held here. 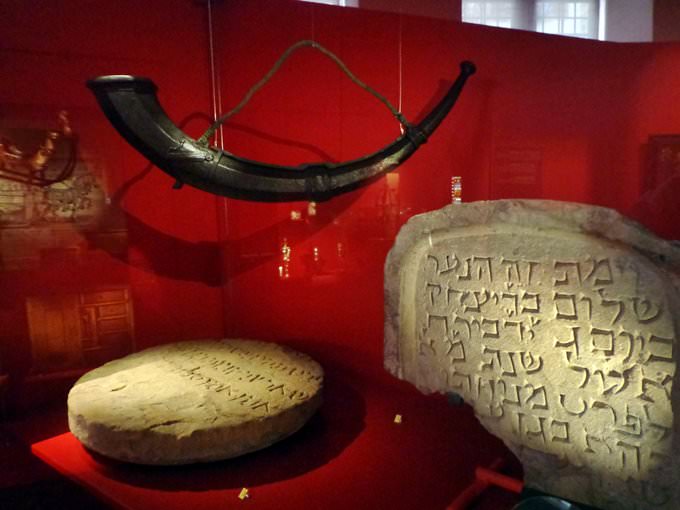 Facts:
» The Strasbourg Historical Museum is very interesting. It is located in the building of the working slaughterhouse. Near it, there is a bridge, from which caged prisoners sentenced to death were brought down into the water.
»  The exposure is divided into 5 sectors. Each one is dedicated to a particular historical period.
»  The first is the Middle Ages and dedicated to the Episcopal rule. The second is the 16th-17th centuries, the epoch of the reform movement. The third is the 17th-18th centuries. The fourth is dedicated to the Revolutionary Movement. Finally, the fifth sector is the present days.
»  Here, you can learn the details about how the citizens live now. The city pattern of the beginning of the 18th century, its relief, and the locals’ everyday life are also interesting in the cognitive aspect. You can see here etchings and picturesque paintings.
»  There is a separate exhibition dedicated to famous persons of Strasbourg.
»  You can see the printed Gutenberg Bible (1495) and early editions of the Bible.
»  The military architect mostly known as the author of “Marseillaise” lived here. You can see a picturesque canvass depicting the first moment of singing. It appeared that it was composed here but not on Marseille.
»  You can even try a military outfit and admire ancient ammunition.
»  The house was last reconstructed in the late 50s.

Facts: » During its long history, the church of the 13th century had been destroyed many times by fire, earthquake (in 1909) or bombing (during the Second World War). In 1470, the citizens demolished the building not to pass it to the Burgundian conquerors.
»  There is a preserved side chapel, several frescoes of the 15th century, and colorful windows. Stained glass windows were given to the museum.
»  It is the fourth building that has been rebuilt since its foundation.
»  Nowadays, the church is under the protection of UNESCO.
»  The organ has sounded in the House of God for over 70 years. Upon the decision of the city administration, it was sold to Germany in the late 18th century. Only in 1897, the organ was placed in the cloister.
»  Its historical exterior has changed. The building can be called a new-build. It was reconstructed in 1944. St Madeleine Church is visited by Catholics.
»  The religious institution was aimed at setting fallen women on the right path.
»  At Sainte-Madeleine Church, the artist Paul Cezanne was baptized in 1839.
»  In the House of God, there are several canvasses of Provence painters.
»  The new altar is encrusted with rock crystal. The outer light pink walls are plain. There are also high narrow windows.

CONTINUE - PART II »»
This guide to architectural sightseeing in Strasbourg is protected by the copyright law. You can re-publish this content with mandatory attribution: direct and active hyperlink to www.orangesmile.com.
Strasbourg - guide chapters 1 2 3 4 5 6 7

Build your walking routes in Strasbourg on the landmark map Architectural landmarks in the regions around Strasbourg

Stuttgart
The construction of the New Palace was initiated by Duke Charles Eugene of Württemberg who intended to turn Stuttgart into the French Versailles. It began to be built in 1746 by Italian architect Matteo Retti. Five years later, he was replaced by French architect Philippe de La Guêpière. It took a long time to erect the palace, and the construction was ceased several times. The building was completed in 1807 just by the arrival of Emperor Paul ... Open »
Mannheim
The water tower built in 1889 is one of the landmarks of the city. The high-rise is 60 meters tall. The base is 19 m in circumference. The construction was designed to collect potable water. The structure could hold up to 2000 m³ of liquid. The building was last renovated almost a hundred years after it was built. Although the construction is intended for practical use, it is also considered to be of architectural value. The building ... Open »
Zurich
The Swiss National Museum was built in 1898. Architect Gustav Gull combined architectural elements of different eras in his project, and the building turned into a fairytale castle with numerous turrets and courtyards. The museum has exhibits from ancient times to the present day in its collection. Some exhibits date from the 6th millennium BC. Visitors are told about how this unique country was formed, about the country’s most famous ... Open »
Trier
The cathedral dates back to 320. The Roman warlord Constantine ordered to build a cathedral. The Empress sacrificed her palace for the construction. There are still its remains in the foundation. The Normans almost destroyed the building in 882. It started to be restored in 1196. Originally, the building was built in the Roman style. At the beginning of the 18th century, clergymen decided to add baroque elements to the ... Open »
Mainz
It’s truly impressive how architects of the first millennium were able to erect houses of great height and scale. The building is 116 meters long, and the tower is 83 meters high. It took more than 200 years to build the cathedral (975-1239), which was connected with the fire that destroyed the structure and looting during wars. The cathedral is faced with red sandstone which contrasts with the chapel built of light blocks. There are ... Open »
OrangeSmile.com - online travel reservation expert providing reliable car rental and hotel booking services. We feature more than 25.000 destinations with 12.000 rental offices and 200.000 hotels worldwide.
Secure Server