Any review of the architecture of Strasbourg would be incomplete without mentioning Strasbourg Cathedral, Palais Rohan, Oeuvre Notre-Dame Museum, Observatory of Strasbourg, Palais du Rhin and many others. The virtual flight over these monuments in HD (the video is on the left), the photo galleries of Strasbourg, and the most interesting facts about every sight – we have carefully prepared lots of useful information for you. The overview architecture map of Strasbourg at the bottom of the page will help you not to get lost in your sightseeing routes of Strasbourg. So, let’s go! 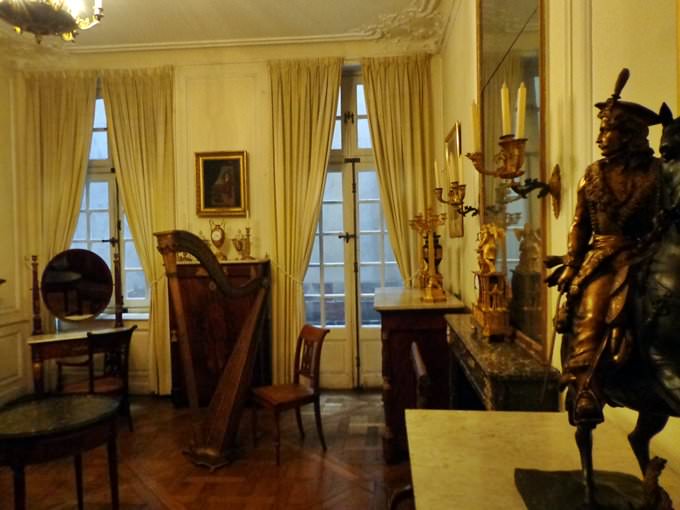 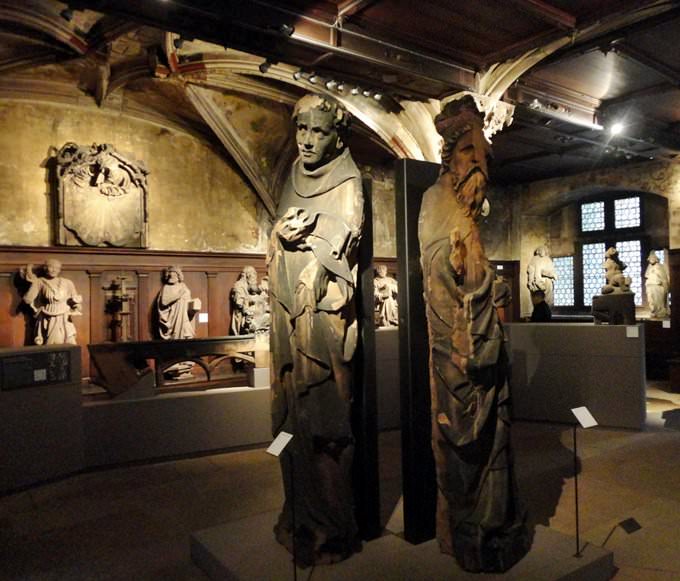 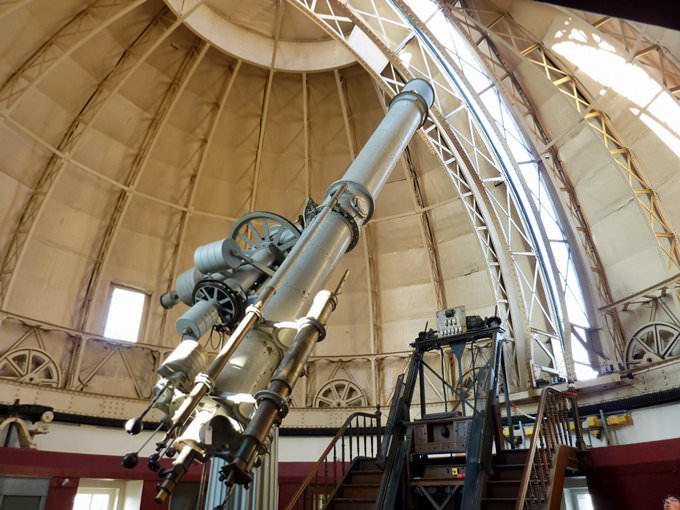 Facts:
» If you want to know what ancient devices help study cosmic bodies and how people explore the space, you should visit the Observatory of Strasbourg.
»  At the lower level, there is the “Star Basement”. There is the collection of the first devices that helped people view space objects: telescopes, astronomic and navigation devices, mechanisms, a simulative celestial sphere, and devices determining the height and the distance between celestial objects.
»  In 1870, the observatory was equipped with a 50 cm telescope, the biggest one at that time. However, its power was enough only for viewing comets and some stars.
»  Due to technological progress, astronomical devices have been developed, which lets accumulate invaluable experience in this field of knowledge.
»  The building is 142 m high.
»  At one time, many famous astronomers carried out their scientific experiments.
»  Not so long ago (in 1981), the planetarium was built near the observatory. On the celestial map, you can learn the location of planets and how they got their names. 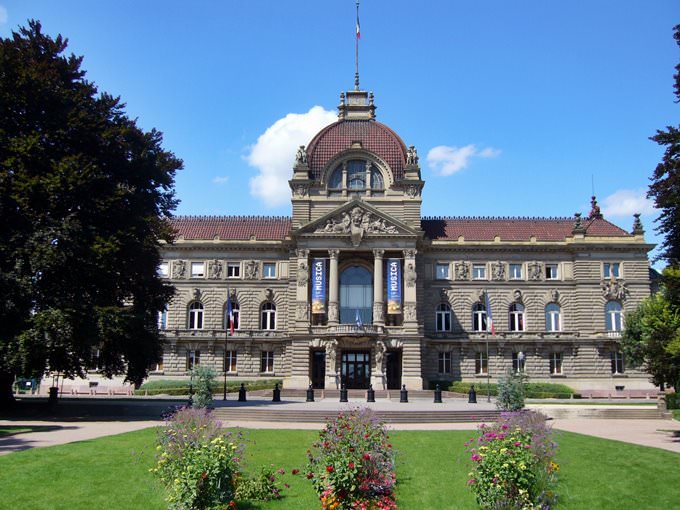 Facts:
» The Palace of the Rhine is the example of Prussian architecture. It is seen from afar due to its big dome.
»  The cult construction is surrounded by a parking area with age-old trees and exotic plants.
»  The architectural style of the building emphasized the power of the German monarch.
»  The huge square building started to be built in 1884. The Emperor had visited it 12 times, until 1914. At that time, the Palace was called Kaiserplatz.
»  During the First World War, the global construction served as the hospital for the wounded. Then, it was used for the Rhine shipping. In 1923, the Palace came to France.
»  The complex of five buildings is very harmonious despite the fact that its design combines different styles.
»  The facade of the 3-storey is made of yellow sandstone blocks. The three-tier staircase leads to it. The outer walls are decorated with a lot of antique sculptures and bas-reliefs. There is a fountain in front of the palace.
»  The Empress’s room is open for visitors. There is a white marble fireplace in the midst of the walls covered with silk and a painted light-blue ceiling.
»  Nowadays, the Palace belongs to the Department of Cultural Affairs where it is located. 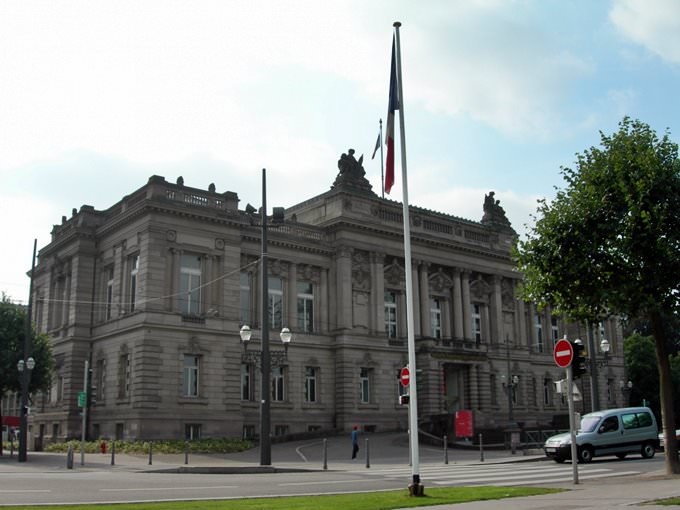 Facts:
» The Palace in Republic Square belongs to the National Theatre.
»  Originally, the building served as the Regional Parliament. It was built in 1889.
»  In 1919, French authorities presented the construction to Strasbourg. It was a music school that occupied the second level. There were classrooms and a concert hall. Later, the music school was moved to another place.
»  Its eastern part was destroyed by an artillery strike. It was reconstructed 13 years after.
»  The theatre hall was built.
»  The National Theatre of Strasbourg has a wide repertory. It was founded in 1946.
»  In the building, there are two halls for theatrical performances. There are make-up and rehearsal rooms, as well as rooms for administrative purposes. There is also a workshop for making scenery and costumes.
»  The number of staff is a hundred workers. The prolific creative team is able to stage up to 15 plays every theatre season.
»  Troupes from other cities and countries often perform here. In the building, there is also a drama school where 20 people take classes.
»  In 1995, the Palace was recognized as a historical heritage.

Facts: » The library was founded in 1872. All copies of periodicals go to the library. The structure belongs to City University.
»  During the Second World War, the building was seriously damaged by an artillery attack. It was reconstructed in 1956.
»  Its fund includes over 3 million articles. There is also the collection of papyri that includes over 5 000 papers and 6 700 ancient manuscripts. The administration appreciates donations from private libraries and gifts from famous people.
»  There is a unique document, the Peresopnytsia Gospels, in the protected place. It was written in the middle of the 16th century on precious parchments. The text of the book of South Slavic culture has been written with gold and paints. There are bright miniatures on the pages.
»  There is also the collection of coins in the Numismatic Cabinet.
»  Nowadays, the program of the digitalization of the main fund is established.
»  In the National Library, there is the Documentation Service. 165 employees work here. They track the purchase of novelties of literature and manage the documentation.
»  The library impresses with a round 27-meter staircase. It is situated in the central hall and suspended on steel cables. There is an exit on each floor.

This guide to architecture monuments in Strasbourg is protected by the copyright law. You can re-publish this content with mandatory attribution: direct and active hyperlink to www.orangesmile.com.
Strasbourg - guide chapters 1 2 3 4 5 6 7

Plan your own tour over Strasbourg on the monuments map Search for architecture monuments of Strasbourg on the map

Tours through neighbours of Strasbourg

Stuttgart
The construction of the New Palace was initiated by Duke Charles Eugene of Württemberg who intended to turn Stuttgart into the French Versailles. It began to be built in 1746 by Italian architect Matteo Retti. Five years later, he was replaced by French architect Philippe de La Guêpière. It took a long time to erect the palace, and the construction was ceased several times. The building was completed in 1807 just by the arrival of Emperor Paul ... Open »
Mannheim
The water tower built in 1889 is one of the landmarks of the city. The high-rise is 60 meters tall. The base is 19 m in circumference. The construction was designed to collect potable water. The structure could hold up to 2000 m³ of liquid. The building was last renovated almost a hundred years after it was built. Although the construction is intended for practical use, it is also considered to be of architectural value. The building ... Open »
Zurich
The Swiss National Museum was built in 1898. Architect Gustav Gull combined architectural elements of different eras in his project, and the building turned into a fairytale castle with numerous turrets and courtyards. The museum has exhibits from ancient times to the present day in its collection. Some exhibits date from the 6th millennium BC. Visitors are told about how this unique country was formed, about the country’s most famous ... Open »
Luxembourg
The cathedral was named after the Mother of God in 1848. In 1613-1621, the building located in the southern district belonged to the Jesuits. In 150 years, when members of the Order were exiled outside the country, the church was given the icon of the city patroness. The house of God was named Notre-Dame Cathedral after her. It had been constructed for 8 years since the beginning of the 17th century. The updated interior is designed in ... Open »
Nurnberg
St. Lawrence’s Church stands on the foundation of ancient St. Lawrence’s Chapel. It dates back to 1235. In 1350, the construction of a full-fledged church began. It was during these years that an openwork stone rosette with a diameter of 10 metres was created on the facade between the two towers. Later, people started to call it St. Lawrence’s star. The towers of the temple often caused fires started by lightning that struck ... Open »
OrangeSmile.com - online travel reservation expert providing reliable car rental and hotel booking services. We feature more than 25.000 destinations with 12.000 rental offices and 200.000 hotels worldwide.
Secure Server