Preparing your trip to Salzburg: advices & hints - things to do and to obey 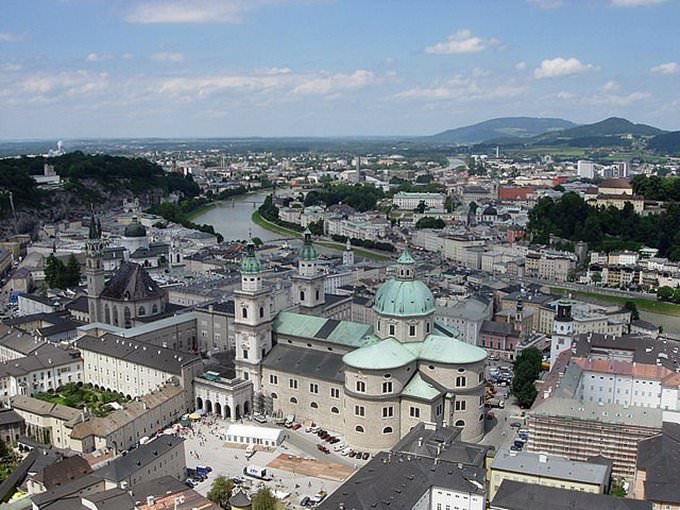 1. The best time to visit the city is during warm months of a year. It’s quite cold in Salzburg in winter, and this fact can prevent you from enjoying various excursions and entertainments.
2. There is a well-developed network of trolleybuses and buses in the city. You can easily get to any street you’re interested in by using public transport.
3. Tickets for public transport can be purchased at any tobacco shop - here they are the cheapest.
4. The city’s taxi is quite inexpensive, but rates may rise in the evening. It is better to call to a special service and get a taxi to a restaurant or a hotel as "catching" a free taxi on the road will be quite difficult.
5. Bike remains a very popular vehicle among locals and tourists as by using it you can freely roam around the city. Top Bike is considered the best bike rental office. Copyright www.orangesmile.com
6. The tourists, who will rent a bike, need to watch it carefully. Don’t leave it unattended on the streets of the city as the vehicle can be stolen. Each bike is provided with a special chain and a combination lock that will help you to protect your two-wheeled friend from thieves.
7. Local chocolate remains a popular souvenir that tourists usually bring from Salzburg. During the time of trade fairs you can also purchase beautiful decorations for your home.
Your active city break in Salzburg. Attractions, recreation and entertainment - best places to spend your day and night here
Salzburg is a real finding for fans of outdoor activities. The city features incredibly huge number of parks, gardens and pedestrian streets, so there’s no wonder why walks and cycling …

Open
8. In order to make your travel more convenient, you can buy a city map and a schedule of all public transport routes. As a rule, they are given for free in special kiosks at the train station.
9. Those travellers, who feel there are not enough attractions in Salzburg, are advised to make an excursion to Vienna. Each day numerous sightseeing buses leave Salzburg for the capital. You can also get to Vienna independently by train.

What to visit being in Salzburg - unique sights Distance from Salzburg center - 53.3 km.
With regard to the available historical data, the first mentions of the village belong to the 14th century. The town is situated away from the other settlements. Until the early 20th century, it was virtually impossible to get to it. For this reason, very little is known about the medieval history of the town. In many ways, the settlement has become famous thanks to its salt mines. … Read further Distance from Salzburg center - 52.9 km.
The glacier serves as a foundation for a viewing platform with a bridge. The structure is perfectly visible even from the territory of Slovenia and the Czech Republic. Not everyone dare to walk through the suspension bridge, as it looks very fragile. Fencing on the bridge and on the observation deck are made of glass. That further enhances the thrilling sensation and allows you to admire the surrounding mountain scenery without any obstacles. … Read further Distance from Salzburg center - 52.5 km.
It was about 40 kilometers long. The pipeline was built for transporting salt to the nearby Ebensee city. Since the foundation of the town, the main local problem is a lack of earth. The area is restricted with a lake on the one part and lofty mountains on the other part. That’s why the town doesn’t have a permanent burial ground, bodies are covered with the earth only for 10 years. After this period the bones of dead people are taken from the earth, blanched and transported in a local chapel. … Read further

Tips for the cities around Salzburg

Landshut
2. Many thrifty tourists wishing to get acquainted with the sights of Munich and the surrounding area choose Landshut hotels for accommodation. They offer more affordable prices, and Munich can be reached by train in just 40 minutes. 3. The city is relatively small so renting a car is only recommended to those who're going to explore its surroundings. Car rental offices ... Open »
Linz
2. The main tourist center of the city is the Linz City Tourist Board located next to the Hauptplatz train station. The center serves its customers daily. You can take booklets describing sights and a city map, as well as learn about upcoming cultural events and book tickets in the tourist office. 3. The high tourist season is from May to October. At this time, the most ... Open »
Munich
2. Fans of nightlife are recommended to choose the clubs that are located on Schwabing Street. This is the place where usually take place the most popular performances of musicians, and visitors can always expect truly interesting entertainments. 3. Car rentals in Munich are rather expensive. The underground remains the most economical and reasonable way to move around ... Open »
Tirol
2. Given that the local highway passes through difficult mountainous areas, some of them may be closed in winter. Tourists going for a trip by car should definitely clarify available routes. Be sure to travel around alpine areas only by car equipped with tire chains. 3. The most profitable way to make calls to other cities and countries remain street payphones. They are ... Open »
Dachau
2. When visiting gastronomic institutions, one should take into account one important feature. At the entrance to any restaurant or bar, it is customary to greet all those present and wish them a good meal. Such a greeting should certainly be responded appropriately. 3. Local people are quite wary about foreigners, having a bit of distrust towards them. However, it's ... Open »

Travelling to Salzburg - advices and tips. What should be provisioned in advance, the rules you might want to follow, and the things you better avoid doing in Salzburg. We help you to make your trip smooth and easy, with no unexpected surprises.