Of course, in order to feel the magnificent atmosphere of Rotterdam, one needs to visit this place, walk on charming streets of the historical center, visit local cafes, and enjoy the look of the local landmarks - Euromast, Cube house, Grote of Sint-Laurenskerk, Wereldmuseum, Witte Huis and many others. In order to make your virtual tour to the city more interactive, we offer an unusual opportunity to fly over every notable landmark of Rotterdam. Simply start the video, and use the full-screen mode. Each landmark comes with extra information, containing a collection of interesting facts and a photo gallery. Let’s go! 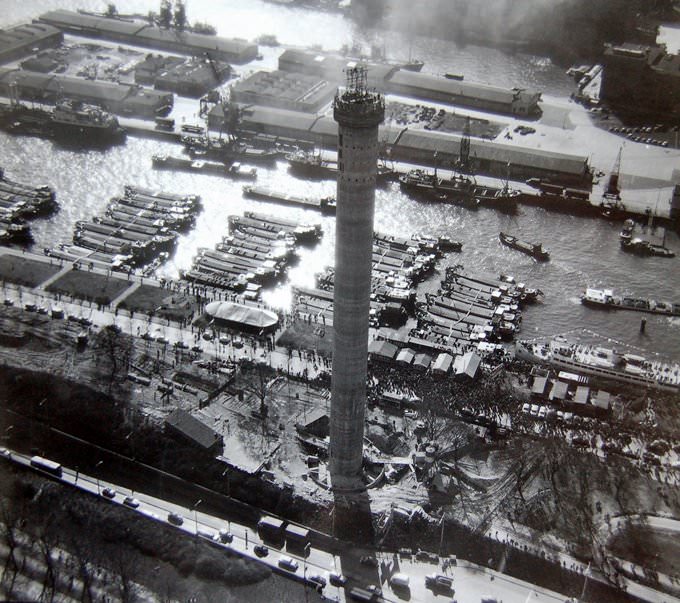 Facts:
» The Euromast is a skyscraper in the form of the mast. The City Hall declared the competition of the construction of the extraordinary object. The Dutch architect won it.
»  The Euromast was built in 1960 in conjunction with the tenth international Floriade exhibition. The Euromast is 9 m.
»  The walls are about 30 cm thick. Its foundation is a solid block that weighs 1 900 tons. It makes such a thin construction more stable.
»  There are several institutions. The citizens set their hearts on the De Rottiserie restaurant that offers exquisite cuisine and luxury service. There is a cafe with affordable prices under the restaurant. Two hotel rooms are provided on special request.
»  There is a flat foundation in the form of the bridge at a height of 100 m. It is covered with a glass dome. Observation platforms have a view of the surroundings.
»  It was planned that the tower construction should have been 101 m high and ended with a platform. The citizens mocked at the construction and called it “crow’s home”. Later, the Cosmic Tower was constructed. The building is 85 m high. It is used for technical needs.
»  You can go upstairs to an observation transparent cabin through a floor hatch. It turns around its axis. 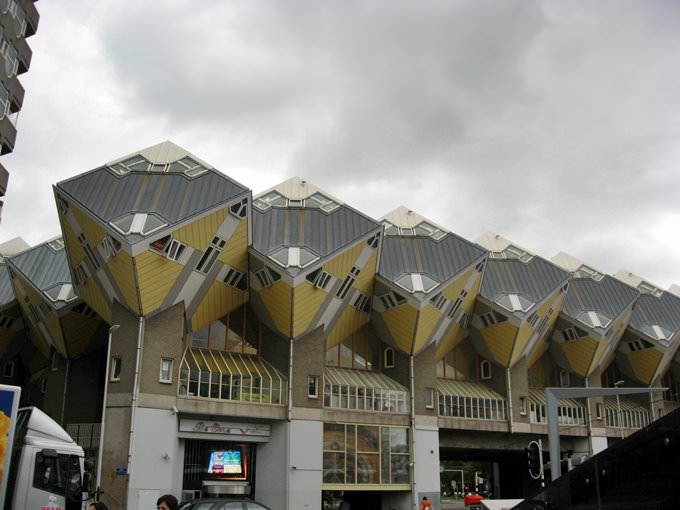 Facts:
» The houses are situated at a 54-degree angle and supported by high hollow hexagonal pillars above ground level. There are stairs.
»  The City Hall offered to build a residential complex on the bridge with a transport junction. The architect established the modern technology project called “Huts on Trees”.
»  As a result, 38 buildings with a well-developed infrastructure were constructed. Three sides of the cube turn to the ground and the other three - upwards. It was an effective solution to fix the wooden frame with concrete mixture.
»  At the first level of the complex, there is a playground for kids, a school, and boutiques. There is a recreation area at the second level. Apartments are on the higher floor. All the objects are a uniform residential complex.
»  The buildings match the configuration of the bridge they are located on.
»  Rooms in apartments are quite extraordinary - triangles and pyramids. The walls and the floor here are angled too.
»  The isolated three-storey apartment is a separate cube. There are a living room and a kitchen at the first triangular level. At the second level, there is a bedroom and a bathroom. The third level is a triangular pyramid with windows on all sides. There are a study, a children’s room, and a terrace for recreation. 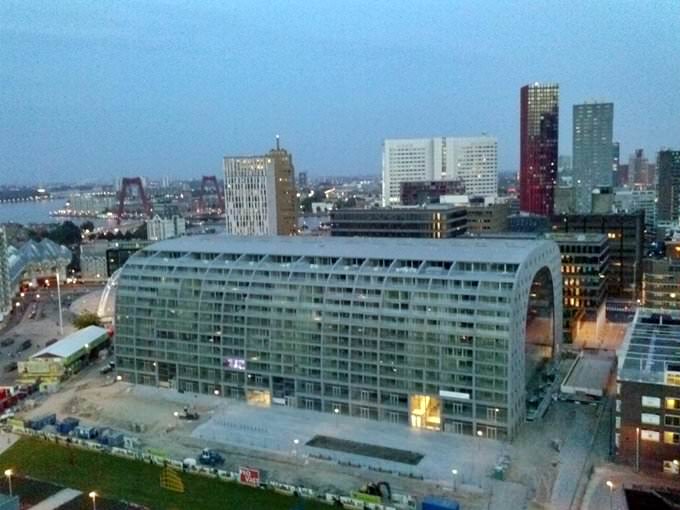 Facts:
» The Grote of Sint-Laurenskerk is the only medieval monument in the city.
»  It started to be constructed in 1449. The construction lasted about a hundred years.
»  The church belonged to different confessions (Catholics and Protestants).
»  The building was damaged by the bomb. The authorities wanted to demolish it. However, the church was not dismantled but reconstructed thanks to the locals. The restoration lasted 16 years.
»  The Gothic exterior is deceptive. It does not match the interior, as there are a lot of contemporary decorative elements in St. Lawrence’s Church.
»  Designers created an art zone inside. In the hall, lights are always switched on. Spatial arrangements look strange. In the mirror, you can see the inscription “I will live”.
»  There is a cafe instead of traditional restaurants. You can have tea and talk about the divine purpose.
»  There is an exhibition in the added chapel. Its exhibits tell about the city development and the temple. In a particular sector, you can see pictures depicting world religions. These canvasses are not paintings but moving figures.
»  Besides religious services, you can visit an organ concert or other public events. 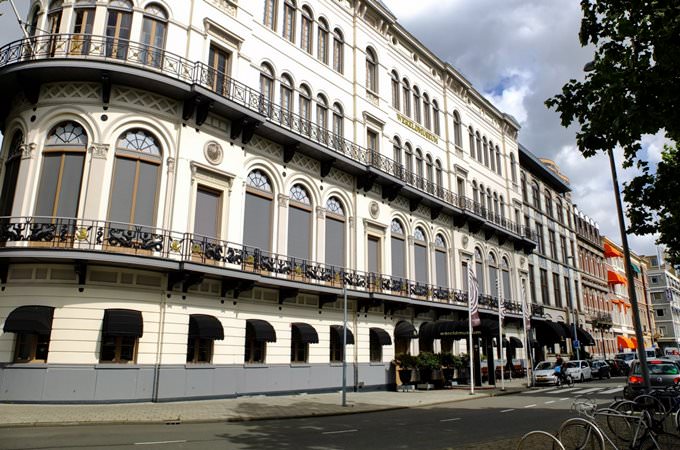 Facts:
» The historical building is located in the center, on the embankment, and was built in 1851. It was designed by the project of the Dutch architect.
»  Prince Heinrich wanted to use the building as a yacht club. The festive opening ceremony was visited by King Wilhelm III.
»  Then, items brought by members of the community from all parts of the world had been collected. That is how the Maritime Museum was founded.
»  When the crowned leader died, the mansion became the property of the city council. In 2001, it was named Museum Volkenkunde.
»  On the balcony of the institution, you can see 1 800 exhibits. They have been collected for 160 years.
»  These are precious jewelry, dresses, hats, fabrics painted manually, pieces of antique furniture, weapons of soldiers of the past, statues, sculptures, idols, and other artifacts.
»  Other exhibits represent the culture of Asia, African countries, and American lands. You can see everything created by humans for 2 000 years.
»  The music sounding in halls corresponds to the theme of the exhibition. 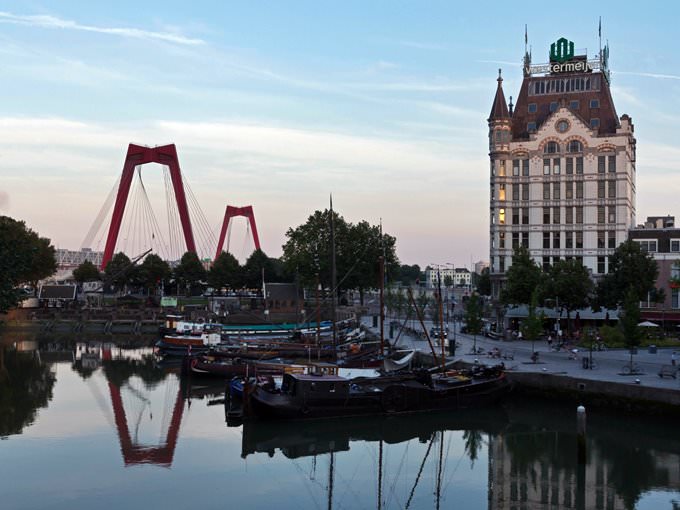 Facts:
» The City White House is not a political institution like in the USA. It is one of the first 43-meter constructions built in Europe in 1898. The building was occupied by offices.
»  It was difficult to construct it because the soil here was boggy. It was decided to beat about a thousand pillars into the ground in a special manner. The house built on the marshy ground not only withstands its weight but also survived during the bombing, unlike nearby constructions.
»  The 11-storey building combines features of both skyscraper and castle. It was built of concrete and bricks.
»  The building is quite impressive. It is distinguished by extraordinary windows. The fanciful roof resembles a square pyramid. There are towers in its corners. Premises protruding from the facade improve the illumination.
»  The ground floor is decorated with moldings of flower ribbons and figurines of dragons. Five statues at the bottom symbolize success, industry, trade, agriculture, and navigation. The walls are covered with colorful riles with patterns.
»  There are modern business offices inside. However, access to them is denied. You can only go upstairs to the observation platform. Facts: » 6% of Muslims inhabit in the Dutch country. In the city, there are about 30 mosques. The last one was built in 2001.
»  It is dedicated to the memory of Islamic lyricist D. Rumi. His texts help make the right choice in life because they interpret the Koran artistically.
»  The color of outer walls is dimmed, which evokes comfort.
»  The dome, towers, from which people were encouraged to pray, and the interior are designed in the Ottoman architectural style.
»  People come to the Mevlana Mosque to worship. It is also a cultural and religious center. Here, lessons, where abstracts and lectures are discussed, are conducted. People can also attend Koran classes and conferences.
»  Followers of all religions and those who want to learn more about their belief can enter the building.
»  The survey of the citizens was conducted. Its participants chose the best construction in the city. The Mevlana Mosque took the lead.
»  When the construction was completed, the mosque and the district where it is located gained the same name.
»  The construction was financially supported by Islamic leaders and Turks settling in the country.

CONTINUE - PART II »»
This guide to architectural sightseeing in Rotterdam is protected by the copyright law. You can re-publish this content with mandatory attribution: direct and active hyperlink to www.orangesmile.com.
Rotterdam - guide chapters 1 2 3 4 5 6 7 8 9 10 11 12 13 14 15 16

Build your walking routes in Rotterdam on the landmark map

Architectural landmarks in the regions around Rotterdam