We continue on the collection of the most important architecture monuments of Philadelphia: Philadelphia City Hall, Philadelphia Museum of Art, Eastern State Penitentiary, Franklin Square, National Constitution Center, Building of the Customs Service, and Second Bank of the US. Perhaps, all of them also define the look of USA in general. The 3D models of landmarks, presented in our Philadelphia flyover video, will help you to get a grasp on the true architectural and historical heritage of this place. We hope that photographs and historical facts will give you a better impression on each of these monuments. This information is also useful when making up your own excursion tour through Philadelphia. 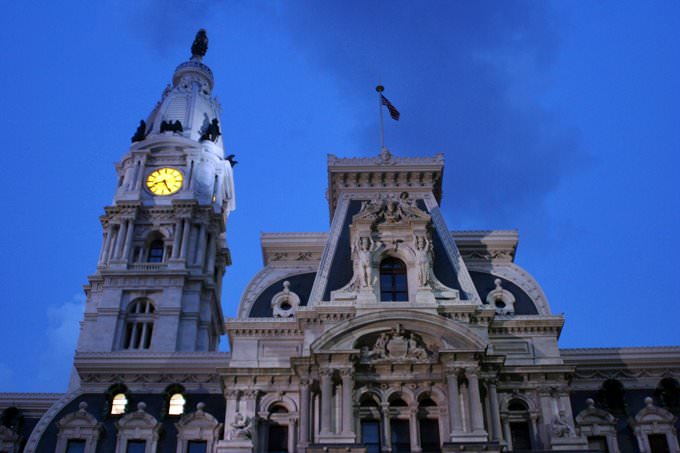 Facts:
» The city administration holds its meetings in a special building – Philadelphia City Hall.
»  It’s a 167-meter building with a dome crowned by an 11-meter statue of the founding father William Penn. It weighs 27 tons. The statue faces the south. Thus it is lit by sunshine during most of the day. The bronze figure is empty inside. There’s a passage inside leading to the top of the hat that you can get to through a hatch.
»  The city hall is made of blocks along with brickwork. Granite stone, limestone, and marble were the main building materials used for facing. The walls are almost seven meters thick which is quite impressive!
»  The 152-meter tower has a clock with an 8-meter diameter on all four sides.
»  The observation platform is glassed in. You can reach it by elevator along the outer wall. The cab can hold up to six people. It is also made of glass.
»  The city hall was built from 1871 to 1901. $24 million was spent on the construction.
»  The internal space is divided into 700 rooms. The local city hall is considered to be the largest municipality.
»  The building is shared by three powers: the executive committee, the city council, and the civil court.
»  There’s a 2-hour tour with a lift to the observation tower organized for tourists. 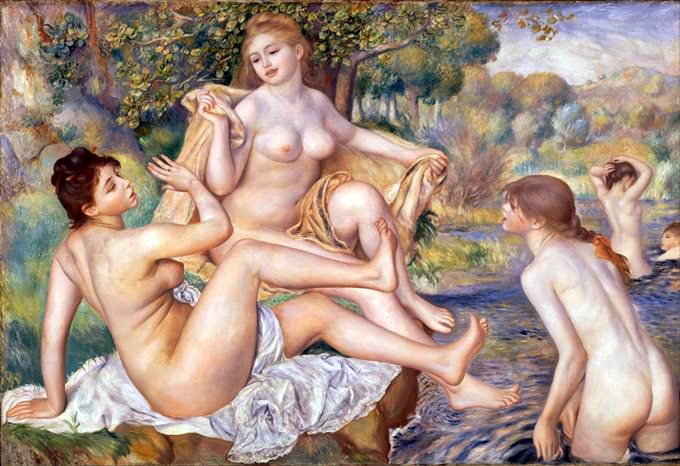 Facts:
» The Philadelphia Museum of Art is the largest art museum in the country. About 25 exhibitions are held there every year. It was founded in 1876.
»  Some exhibits are over 3,000 years old. Chinese, Japanese, and Korean ceramics are displayed on the racks. There’s a collection of artifacts from Egypt and Rome. There’s a separate area with Persian and Turkish handmade carpets. A Chinese palace hall, a Japanese teahouse, and an Indian temple complex are recreated here. A collection of weapon is located in one of the spatial zones.
»  The Philadelphia Museum of Art has a patio where some of the statues are put.
»  The permanent collection has 300,000 cultural objects. The museum takes special pride in the paintings by Impressionists and Surrealists, especially Van Gogh’s paintings.
»  There are separate halls displaying sculptures and objects of the decorative and applied arts showing the everyday life of different nations.
»  On Fridays, live music discos are organized here. You can also listen to jazz performers.
»  The entrance to the building is made in the Greek style. The locals call it the “Greek Garage” due to its enormous size. 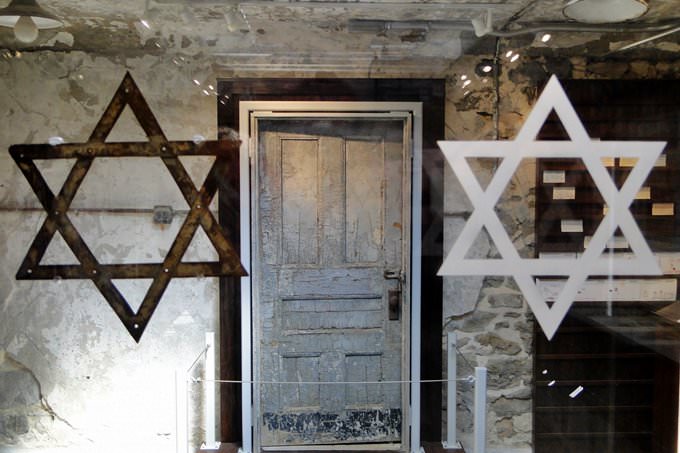 Facts:
» Three centuries ago, there was no system for keeping prisoners. Adults and teenagers were kept in the same area regardless of the degree of the crime.
»  In 1787, the authorities founded a “repentance house” – the Eastern State Penitentiary. It was called a penal colony.
»  In today’s money, the construction cost $16,000,000.
»  A plot in a cherry orchard near the city was allocated for the buildings. A city of Philadelphia began to grow near the state prison.
»  The prison buildings were located around a watchtower, so the guards were able to watch the prisoners’ movements from above by going around the tower platform.
»  Initially, 250 criminals were detained here.
»  The facade of the building has jagged walls and blind windows. The construction was supposed to inspire fear.
»  Unlike in townspeople’s houses, there was heating and water.
»  Walks for prisoners were organized in the courtyard. During this time, criminals had to wear masks in order to minimize any communication.
»  All people were engaged in some sort of work, for example, shoemaking. The rest of the time had to be dedicated to reading the Bible and reflecting on their wrongdoing.
»  The first prisoner arrived here in 1829. He was arrested for theft. 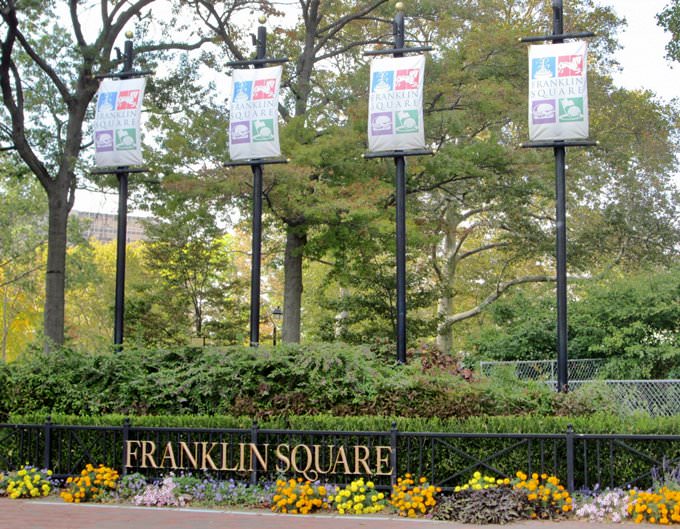 Facts:
» Franklin Square is a recreation area in Philadelphia. It was created in 1682 with the assistance of the mayor serving then.
»  A nonprofit organization takes care of the state of the surrounding area.
»  The area is currently considered a historic place and is included in the register of preserved objects. The park is named for one of the founders of the country.
»  Historically, the area was not always a recreation area. There were times when it was used for grazing. A warehouse with weapons (1812) also used to be here. The square was once rented by the German Reformed Church.
»  One of the plots used to be a graveyard. The remains of gravestones over graves testify to the fact. Some of them managed to remain intact. Memorial plaques are installed on them.
»  In 1820, the park was renovated. There appeared paths and plants. As the number of vehicles increased, the pedestrian zone became significantly smaller. During the Great Depression, the park got popular among the homeless.
»  $5.5 million was spent to reconstruct the park in 2000. The park was cleaned, and the fountain bowl was restored. There appeared a golf course and attractions.
»  The square was reopened in 2006. 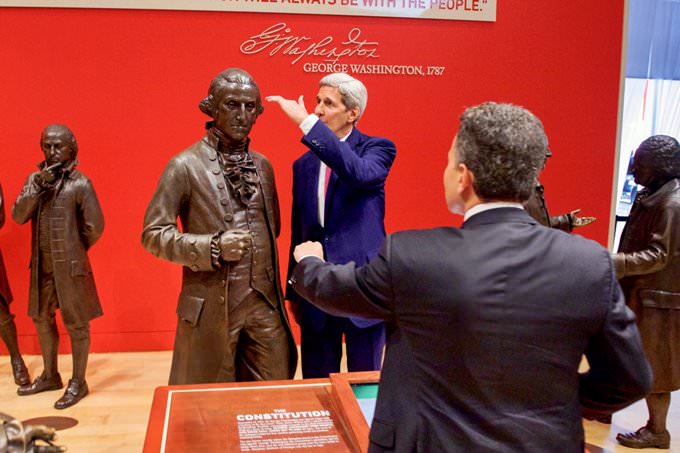 Facts:
» The National Constitution Center is a city museum dedicated to the main law of the state and its regulatory acts. A variety of texts and photos are designed to explain how the constitution was originated and how it influenced people’s fates. There are reports and films dedicated to the state programs aimed at the democratization of society.
»  The National Center was opened on the day when the main document was signed more than 200 years ago – in the summer of 2003.
»  US Congress initiated the creation of the Constitution Center. The goal of the museum is to promote the legal framework.
»  There is a copy of the Emancipation Proclamation behind a glass. A touchscreen monitor provides information about the people who formed the country's constitutional law.
»  A theatrical interlude takes place in the museum every half an hour. The 17-minute Freedom Rising production shows how people struggled for freedom.
»  The Signers’ Hall lets everyone leave their signature on the Constitution symbolically confirming their agreement with the draft lawmakers. There are 42 life-sized bronze sculptures of them.

Building of the Customs Service, Philadelphia

Facts: » The Custom House was built between 1932 and 1934. The construction cost $3,500,000.
»  The 17-story building spreads for as long as a quarter. The facade is faced with local limestone and decorated with aluminum inserts. It has steel casement windows. Metal bas-relief panels are set along the base of the building. They depict scenes from trade life. The main entrance is made as an arched opening.
»  The architect made the top of the building in the form of a huge domed ceiling of gypsum tiles. The hatch that lets light in weighs 140 tons. There were times when, sitting at a large marble table, workers carried out the necessary operations under it.
»  Nowadays, various government offices are situated here.
»  The Custom House is included in the list of historic monuments worthy of preservation.
»  It was built during the Great Depression. The construction stimulated the formation of new jobs. 4,000 workers were hired.
»  The picture of the building can be found on 50s postcards.
»  The US Custom House adjoins a tower. It has a light. It used to give light when firewood was lit under it.

Second Bank of the US, Philadelphia

Facts: » The Second Bank of the United States is a financial institution where the government used to own 20% of the capital.
»  The building served as a place where cash transactions were done, tax charges were processed. The Second Bank of the United States was founded to prevent debt growth and suppress inflation. The authorities faced the problems after 1812.
»  The president signed a decree establishing a bank with the right to own it for 20 years. The financial institution operated until 1836.
»  The bank was managed by 25 directors. The candidates were approved by the Senate. The main goal was to prevent the uncontrolled issue of paper banknotes.
»  The exterior of the building is similar to the temples existing in Ancient Greece – there are columns along the perimeter of the building. There are eight of them. Construction works began in 1819 and lasted five years.
»  Marble was used in the facing of the building. As time passed, the marble started to erode. The traces of destruction can be seen on the Doric columns.
»  Nowadays, the former Second Bank houses an art gallery. There’s a collection of portraits by American artists.

This guide to architecture monuments in Philadelphia is protected by the copyright law. You can re-publish this content with mandatory attribution: direct and active hyperlink to www.orangesmile.com.
Philadelphia - guide chapters 1 2 3 4 5 6 7

Plan your own tour over Philadelphia on the monuments map

Search for architecture monuments of Philadelphia on the map

Tours through neighbours of Philadelphia

New York
The Statue of Liberty is located on Liberty Island and is one of the most famous sculptures in the USA and in the world as well. The Statue of Liberty is often called the symbol of New York City and the United States, the symbol of freedom and democracy, and the Liberty Lady. That was a gift of the French on the centenary of the American Revolution. The goddess of freedom holds a torch and a tablet and stands with one foot on the broken chains. ... Open »
Boston
The First Church of Christ was built in 1894. It is not just a single building but a complex. Here, the teaching of God and norms of behavior are preached. The initiator of the construction of Boston Church was Mary Baker Eddy. She was cured of the disease after she had turned to God with daily prayers. The first congregation was established in 1879. Today, there are 2 000 branches in many countries. At the Christian Science Church, ... Open »
Toronto
The CN Tower is a TV tower in Toronto built in 1975. With an antenna, it is 554 m high. It had been the highest tower in the world until 2007. When it was designed, special demands on the safety of the construction were made. The TV tower can withstand an 8.5 magnitude earthquake and a wind speed of 420 km/h. The main attraction of the tower is an observation platform at a height of 350 m. Its floor is glass and withstands a weight of 109 ... Open »
Montreal
The Cathedral of Marie-Reine-du-Monde is a cathedral in Montreal that was built in the late 19th century. The cathedral impresses with its beauty and luxury interior. The free entrance and daily services attract a lot of tourists. Visitors of the cathedral are especially interested in beautiful statues of saint patrons of the city that decorate the facade. High Gothic belfries of the cathedral are architectural attractions of the city. ... Open »
Quebec
The castle was built at the top of a cliff. That is why the building seems to be higher than nearby constructions. You can see the silhouette of the manor on postage stamps. Politicians and creative individuals stayed at Chateau Frontenac. The castle looks really majestic with its red brick walls, green roof, and different sized spires. Its central tower has 20 levels. The openwork stairs lead to apartments where most of the interior items are ... Open »
OrangeSmile.com - online travel reservation expert providing reliable car rental and hotel booking services. We feature more than 25.000 destinations with 12.000 rental offices and 200.000 hotels worldwide.
Secure Server