Preparing your trip to Philadelphia: advices & hints - things to do and to obey 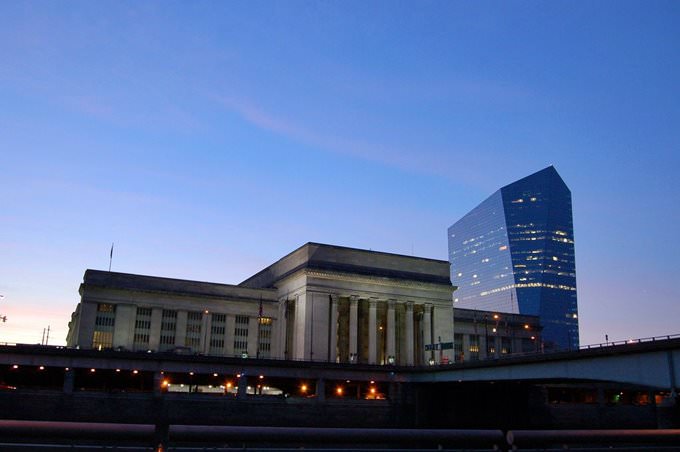 1. Mains voltage is 110 V; the standard American-style outlet is usual for hotels. Before the trip be sure to check the compatibility of electrical appliances and take adapters for gadgets.
2. It is customary to leave a tip in local restaurants and cafes; it is usually quite high and make out 18-20% of the total bill. In some large restaurants a service charge is included into the total order; in this case, there would be ‘gratuities’ or ‘tips’ mark in the check.
3. All public places are non-smoking, so you should pay special attention to signs. As a rule, there are smoking areas close to all major venues and entertainment places. Heavy monetary fines are charged in case of rule violation.
4. When going on holiday be sure to take a copy of the identity document; it will help you to solve any misunderstandings easily. In particular, it is useful to young people who expect to purchase tobacco and alcohol, as it’s prohibited to sell them to persons under 21 years.
5. Holiday-makers should take into account that in the large restaurant tables are booked advance, especially in popular restaurants where there are lots of visitors in evenings. Also take care about buying tickets for various entertainment events well in advance, as it will eliminate the need to stand in long queues. Copyright www.orangesmile.com
6. Drivers should be aware that it isn’t easy to find parking place in the city. Parking is forbidden on some streets, while other places are limited by strict time limits. Rent a car would be beneficial only to those who travel as a great company and plan to visit different areas of the city.
7. Philadelphia has the well-developed public transport system; it is possible to move freely throughout the city. It’s necessary to buy train tickets in advance; they are sold in kiosks close to all stops of public transport.
Excursion over cultural sights of Philadelphia - 'must visit' points of interest
Philadelphia is a modern progressive city that stands out among the rest because of the unique atmosphere of aristocratic refinement and modesty. The city has a huge number of iconic sites …

Open
8. Holiday-makers should take into account that calls from the hotel are very expensive. If you need to call in another city or country, it would be better to use special street payphones. They are situated in all busy tourist areas.

Preparing your trip to Philadelphia: advices & hints - things to do and to obey You can re-publish this content with mandatory attribution: direct and active hyperlink to www.orangesmile.com.
Philadelphia - guide chapters 1 2 3 4 5 6 7

What to visit being in Philadelphia - unique sights Distance from Philadelphia center - 1.3 km.
Today, Independence Hall is one of the most popular attractions of the United States. Every day amazing guided tours are held at  Independence Hall. As a rule, a tour begins with a visit to the courtroom, as well as the assembly hall, where Continental Congress meetings were held. It’s worth noting that many halls after more than a hundred years managed to preserve their pristine design, which makes the tour even more interesting. Independence Hall can boast with lots of great historical artifacts. Here you can see the Washington's chair with rising sun cut on it, and the original silver inkstand, which was used during the signing of the Declaration of Independence. … Read further Distance from Philadelphia center - 25.7 km.
Today, the series and the movie have a huge number of fans; the unique museum is aimed at them. The area of ​​the facility is 929 square meters. More than 100 000 exhibits related to the movies and starred actors are collected there. Here, you can see the cute figurines featuring favorite characters and rare photographs, which were made in the mid-20th century. One of the main features of the museum is a repository of movies. … Read further

Tips for the cities around Philadelphia

Manhattan
2. Manhattan should better be cruised on foot as it is a perfect way to visit the most significant landmarks and sights. Besides, some central streets are free of city traffic being totally pedestrian areas. 3. The optimum means of public transport is underground. The territory of the Manhattan island can be easily cruised by bus. The underground operates till late night. ... Open »
New York
2. If you want to get to a museum or to a popular restaurant, you are highly recommended to check the availability of tickets of empty seats in advance. Ordering tickets to some excursions and booking tables in some institutions must be done in advance. 3. Do not enter empty wagons in the city’s subway. When you make a walk in the city, it is also recommended to stay ... Open »
Baltimore
2. The closer a gastronomic institution is located to a hotel, the higher is the cost of meals. Tourists, who expect to save on food, are recommended to visit cafes and restaurants that are located in one of the numerous malls of Baltimore. 3. The power supply voltage is 110 V, so you may need a special adapter to use certain appliances. Sockets are also different from ... Open »
Massachusetts
2. It is convenient to travel around metropolitan area of the state by public transport. Those who expect to move a lot and visit distant cities are recommended to rent a car, as it offers travelers an opportunity to move freely throughout the territory of Massachusetts. 3. Local roads are usually relatively free of traffic. The fact is that the state's population density is ... Open »
Cambridge
2. The majority of hotels, restaurants, cafes and other public places are equipped with free Wi-Fi. However, some institutions may charge a small fee for this service. 3. Line supply voltage in the majority of hotels is 120V. Local hotels are equipped with the standard American-style wall sockets. Make sure to check the compatibility of the appliances that you plan to ... Open »

Travelling to Philadelphia - advices and tips. What should be provisioned in advance, the rules you might want to follow, and the things you better avoid doing in Philadelphia. We help you to make your trip smooth and easy, with no unexpected surprises.