Sightseeing in Odense - what to see. Complete travel guide

Odense is one of the largest cities in Denmark and the birthplace of the famous storyteller Hans Christian Andersen. The streets of this place keep the memory of the world-famous writer, so here you can see many sculptures, which demonstrate the characters of his tales.
Advices to travellers: what you should know while being in Odense
1. The optimum way of city cruising by public transport is a bus. A bus is commonly entered through a front door and tickets are bought directly from a bus driver. Travelers should keep in …

Open
The city is rich in historical monuments and places of interest as well. The Tower of Odin is one of them. It was built in 1935 and occupied the second place in terms of height among the similar buildings in Europe. In 1944 the building was damaged by the explosion organized by the Danish Nazis. It was decided not to build the tower from the new one and so a miniature model was installed on its place.
Several major attractions are located around the central square of the city. Here you can see a beautiful cathedral and a monument dedicated to Andersen. One more amazing monument dedicated to Holy Canute, the patron saint and protector of the city is located on the opposite side of the square. The Nørregade Street is the location of an old palace named Odense Slot, which holds the meetings of the City Council. Not far away from the castle is located the monastery called Graabroedre kloster, in which walls is opened the largest nursing home of Odense. Copyright www.orangesmile.com
Cuisine of Odense for gourmet with top restaurants and cafe
The most original eating destination of the city of Odense is the Den Smagløse Café. The eating house features upscale interior design, rich menu and high class service. After trying the …

Open
One of the biggest parks of Odense is also named in honor of the great storyteller. The park is located along a small river and is decorated with sculptures and carved benches. On the bank of the river you will see a model of a small boat made of steel. But the main location dedicated to Anderson can be found on the Munkemøllestræde Street. On this street the famous writer spent the majority of his life. Among other notable places recommended for visiting we can distinguish the Church of St. Alban, the Church of the Virgin Mary, Montergarden Mint and one of the most picturesque places - the Nonnebakken Hill.

A special landmark for the city is its original open-air museum called the "Funen Village". The museum occupies a vast area, it is a complex of beautiful wooden houses dated from the 16th to 19th centuries. All the houses presented here are original, they were brought here from different parts of Denmark. Each house houses its own interesting collection of ethnographic exhibits. Visitors to the museum have a chance to see collections of antique utensils and furniture, discover an old forge and various handicraft shops.
Excursion over cultural sights of Odense - 'must visit' points of interest
Among landmarks and sights of the city of Odense tourists will discover ancient houses and museums, majestic cathedrals and churches, scenic streets and large squares of historic …

Open
An equally interesting cultural facility is the Danish Railway Museum, the largest museum of its kind in Scandinavia. Opened in 1918, it was originally located in Copenhagen, and in 1975 it was moved to Odense. Today, its guests can see unique model railway layouts, ferries, and trains; the museum presents 15 antique vehicles. Today the museum covers 10, 000 square meters, and its most valuable exhibits are considered 19th-century locomotives. 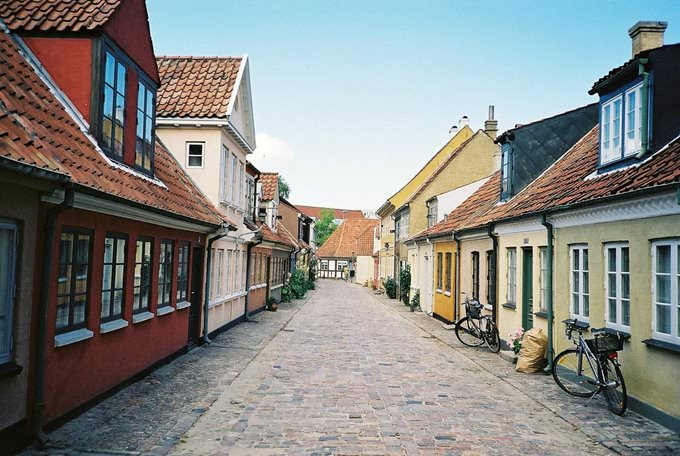 Among the religious monuments is Saint Hans Church originally built in the 15th century as part of a large monastery. Over time, the monastery was abandoned and came to complete desolation. The church we can see is its only surviving part. According to historical data, the very first church in this place was built in the late 13th century. Many interesting old artifacts have been preserved within its walls. Next to the building, you can see the ruins of historic structures.
Your active city break in Odense. Attractions, recreation and entertainment - best places to spend your day and night here
Odense is a perfect destination for a family vacation and active leisure fans due to a great variety of entertaining establishments. Those tourists traveling with family should necessarily …

Open
Another unique historical landmark is Egeskov Castle, which is more than 450 years old. The castle occupying a vast area of more than 1,100 hectares is located on the island of Funen. The building has as many as 66 rooms, there are also four ancient labyrinths on its grounds. Hedge mazes that can be seen around the castle are unique - they were formed almost 300 years ago. Today, within the walls of the castle, there is a rich collection of antique furniture and works of art. It has also preserved a beautiful music salon where it was possible to restore the atmosphere of the past as accurately as possible. All who visit the castle in the warm season have a chance to take a walk through the beautiful garden.

This guide to iconic landmarks and sights of Odense is protected by the copyright law. You can re-publish this content with mandatory attribution: direct and active hyperlink to www.orangesmile.com.
Odense - guide chapters 1 2 3 4 5

National and city parks around Odense
♥   National Park 'Nationalpark Mols' , 96.4 km from the center. On the map

Sights around Odense from our guide 'Extreme places on Earth' Distance from Odense center - 25.3 km.
The old castle is very popular with the tourists with the children. According to one of the legends, if their visitors behaved well during the last eight days, they can meet Queen Titania in the castle. Besides the magical unique doll house, visitors can see the expositions of four most interesting museums in Egeskov Castle, as well as the dark medieval labyrinths. … Read further

Sightseeing in Denmark: things to see

The town of Roskilde is the location of a wonderful cathedral that was built 9 centuries ago. The cathedral was traditionally used to bury members of the royal family, so currently 20 royal families have been buried there, including the Russian czarina Maria Feodorovna. There is also a museum dedicated to Viking ships in Roskilde. This museum is a great way to learn more about first conquerors and settlers of Denmark. Another magnificent open air museum is located on the Fyn Island. This small island is completely covered with dense forests that hide over a hundred of small villages and medieval castles. Finally, the Mon Island is a place of wondrous nature and is also very popular with travellers. … Open

Search touristic sites on the map of Odense

Sightseeing in regions nearby Odense

Kolding
The Royal Palace is a famous masterpiece of old architecture. It is guarded by the state law. The castle was built in 1268 and was intended to become a guarding facility for protecting the borders of the Dutch Kingdom. During 5 hundred years the castle changed its status many times and was rebuilt. Initially this was a gothic style building with strict lines. Even today you ... Open »
Arhus
The best season for tourists is the beginning of autumn as at this time here takes place one of the annual festivals - Festival of Aarhus. The celebration lasts one week, during which the city hosts music concerts, theatrical performances and enchanting outdoor shows. In addition to numerous bars, restaurants, and discos Aarhus attracts visitors by its unique places of ... Open »
Flensburg
Nowadays you can see a huge number of restaurants, hotels and coffee shops that work in the 19th century buildings. Port district of this town will be surely of particular interest to tourists. Here you will find several entertainment centers and children's amusement parks. This part of the city is simply soaked in fun and joy - you can see funny clowns and musicians who sell ... Open »
Silkeborg
Tourists, who come to the city, are offered to try a large choice of activities including water sports, golf, riding rented bicycles and small motorcycles, or just walking in the city’s suburbs. Among the main attractions of Silkeborg the most significant are Museum of Art, which exhibits a collection of works of the great artist Asger Jorn; Silkeborg museum, which exhibits ... Open »
Kiel
Nicolas Kirche is the main sight of the city. This is a beautiful old building that has already become the signature place of this city. West to the church is located Kleiner Kiel pond – a true miracle of the nature. Museum of Navigation is the most popular cultural facility of the city. The building, in which is located the museum, has once been a fish warehouse. Today its ... Open »

All about Odense, Denmark - sightseeings, attractions, touristic spots, architecture, history, culture and cuisine. Prepare your trip together with OrangeSmile.com - find out the 'must see' things in Odense, which places to visit, which excursions to take, where the breathtaking views are waiting for you. Planning your trip with this travel guide will help your to get the most out of Odense in few days.