«« BEGINNING - PART I
Video of flights over top monuments of Nice in HD format.
Use 'Full Screen' mode.
Notre-Dame de Nice, Musee Matisse, St. Jeanne d Arc Church, and Russian Orthodox Cathedral are the next landmarks in the review. Just like in the beginning of the review, we have prepared a collection of historic facts and some awesome photographs for each of these top architecture monuments of Nice. Don’t forget to admire the look of these sights from a bird’s eye view. This view is available in the flyover video of the architectural skyline of Nice. After such a guide, it won’t be a hassle to make up a great plan of a real-life excursion tour in Nice. Ready, steady, go! 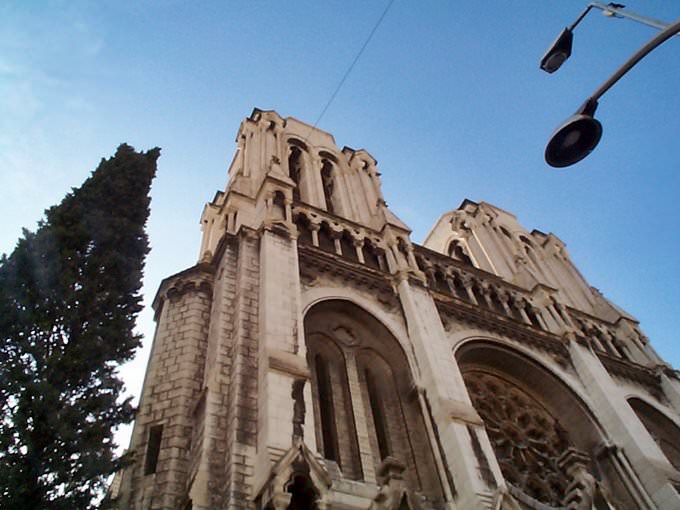 Facts:
» The Basilica of Notre-Dame de Nice is the biggest Roman Catholic church in Nice and one of the brightest attractions of the city.
»  As for its architecture, the basilica resembles Notre-Dame de Paris.
»  The basilica was built in 1868 by the project of famous architect Louis Lenormand.
»  Despite the fact that the church was built in a dark Gothic style. However, the cathedral looks festive. Its exterior is designed in golden and light gray.
»  The basilica has amazing acoustics, so, besides services, church and classical music concerts are often held in Notre-Dame de Nice. 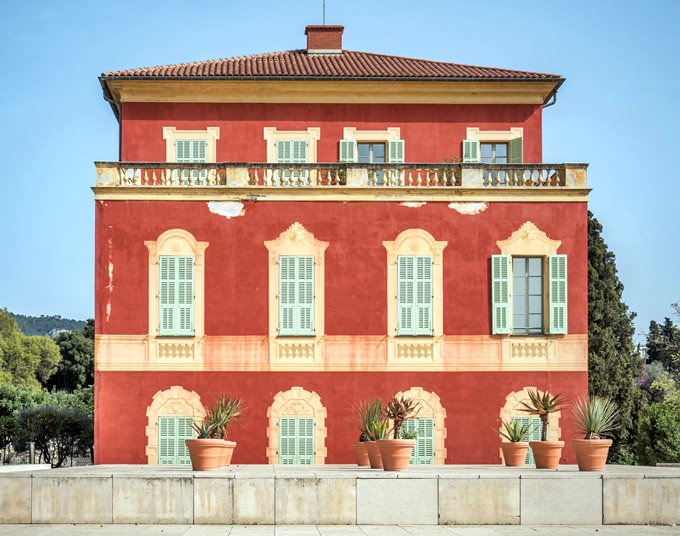 Facts:
» The Museum devoted to artist Henry Matisse deserves special attention. The museum is not only an art exhibition, but also a great artist’s house.
»  The museum collection includes not only his canvasses, but also his belongings. For example, you can see marble tables and Venetian rocking chairs here.
»  In total, the museum collection includes 236 drawings, 70 sculptures and a lot of paintings that depict the life of the great genius.
»  Near the museum, there is a small hotel named “Regina”. Matisse spent the last years of his life here. The view of the city the windows have inspired the artist for new works.

Facts: » The church named after the Maid of Orleans was built in 1979.
»  The place for the construction of a new church was chosen not accidentally as it is here where Giovanna d'Arco was burned alive.
»  The church exterior is very unique so the building is unlike traditional temples.
»  The church resembles a fire with its shape. It symbolizes the heroine of France burned alive.
»  The construction lacks strict lines. The roof covering resembles scales.

Facts: » The Cathedral of St. Nicholas is an Orthodox church in Nice and one of the most famous attractions on the city.
»  According to the media, the cathedral is the biggest Orthodox temple in Western Europe.
»  The construction lasted from 1903 to 1912. At that time, the cathedral was under the Orthodox Russian Church.
»  The Romanovs’ generosity was reflected in the choice of construction materials. These were Italian granite, gilded crosses and dome, German bricks and facade mosaics from Florence.
»  The main relic of the temple is the miraculous icon of St. Nicholas. When the relics of St. Nicholas were transferred, the faded picture on the icon started brightening. Soon, everyone could see the miraculous icon of St. Nicholas with Christ and the Mother of God on both sides.

Plan your own tour over Nice on the monuments map Search for architecture monuments of Nice on the map

Tours through neighbours of Nice

Torino
The Mole Antonelliana has been the highest building in Turin and even in France until 2011. It was designed by architect Alessandro Antonelli. Originally, it served as a synagogue for the Jewish community in 1863. It was planned that the building would be 66 m high. Antonelli was obsessed with high buildings. As a result, the tower is 167.5 m high. The 90-year-old architect did not manage to complete the project and see his creation. ... Open »
Marseille
Cathédrale Sainte-Marie-Majeure is located at the site of the wooden church built in the 5th century, which is proved by excavations. In the late 19th century, it was decided to demolish the old building upon the order of Napoleon III. The citizens were not satisfied with this decision and held a protest demonstration. The old building was not dismantled completely. The new cathedral was built near it. The locals call it “strips on the ... Open »
Milan
The Milan Cathedral is one of the main attractions of Milan located in the historic center of the city. The Cathedral is built of white marble in the Flamboyant Gothic style. The Milan Cathedral is the fifth largest church in the world. The temple can accommodate up to 40,000 people. There are about 3,400 statues in the cathedral. The main attraction inside the cathedral is the golden statue of patron saint of Milan. The roof of the Milan ... Open »
Geneva
The cathedral built at the beginning of the 13th century combines many architectural styles but looks like a single unit. Its interior features some austerity, modesty and, and strictness. Here, you can such unique item, as the rich chair of the French theologian Jean Calvin. You can also climb up the tower. The path in one place offers two directions, southern and northern. The northern tower with a high spire has a panoramic view of the ... Open »
Lyon
The Basilica of Notre-Dame de Fourviere is a landmark of Lyon that is under the protection of UNESCO. It is located on top of the Fourviere hill and seen from any parts of the city. The basilica was built in 1168 at the site of an old church. When it was destroyed, the chapel remained undamaged and has survived to this day. The magnificent church with four towers and a belfry has two naves. The upper one is decorated with stained glass ... Open »
OrangeSmile.com - online travel reservation expert providing reliable car rental and hotel booking services. We feature more than 25.000 destinations with 12.000 rental offices and 200.000 hotels worldwide.
Secure Server