Being one of the oldest cities of Canada, Montreal safe keeps the historical heritage and proudly demonstrates numerous historical landmarks and sights to the city visitors. A sightseeing platform equipped on the top of the mountain of the Mont Royal offers a bird’s eye panorama of the majestic city. All the city districts are perfectly seen from the platform. A walk through scenic mountain areas will turn to an unforgettable experience for nature attractions fans. The Notre Dame de Bonsecours church is a must visit destination for all the tourists arriving at Montreal. The church features a unique architectural style and rich decoration of the interior premises. The church neighbors an observatory, thus after the exploration of the ancient religious artifacts tourists may enjoy a sky of stars.
Advices to travellers: what you should know while being in Montreal
1. Tourists arriving at the airport of Montreal should first find a stall of Guide D'aeroport Montreal-Trudeau on the first level. The stall provides several guiding leaflets for free. The …

Open
In close vicinity to the Notre Dame de Bonsecours church one will find the most beautiful square of the city which is decorated with a monument of its founder being Paul Chomedey sieur de Maisonneuve. The same beautiful and majestic is the square named after the queen Victoria. Ancient architecture connoisseurs are recommended to walk through the Mille Carre Dore quarter as this city area has preserved numerous buildings of different epochs. Among them the Meridit Palace is best worth attention. The building is executed in the Italian Renaissance style.
The Hugh Allan mansion is located near the palace. The best landmark of the Hispano-Moresque style is justly considered to be the Clarence-Sole mansion. Plenty of historical landmarks and variety of different architectural styles fused in original building complexes will turn a walk though the historical quarter of the city to an unforgettable journey to the past ages. Copyright www.orangesmile.com
Top touristic routes around Montreal: architectural sightseeing and landmarks
Discovering the architecture of Montreal from bird's eye view! Cathedral of Marie-Reine-du-Monde, Olympic Stadium, Bonsecours Market, Montreal City Hall, Christ Church Cathedral, Casino de Montreal, all those monuments are defining the image of Montreal …

Open
A significant landmark of the city is considered to be Windsor Station of Montreal. The railway station was built in the end of the 19th century and since that time the place has not survived any scale renovation. Enjoying the majesty of the building it is hard to imagine that the station is more than a hundred years. Few modern skyscrapers are placed close to the railway station setting original architectural contrast to the architectural landmark.

The Saint Joseph Boulevard will turn to a perfect place for hiking enjoying its scenic views. The boulevard features several old residences. The most significant spot of tourist attraction is considered to be the Church of Jesus Christ Child. Montreal features several dozens of museums telling the city guests about the history and culture of the city. Among numerous cultural establishments the Pointe-a-Calliere Museum of archeology and history as well as the David Stewart Museum of local history are best worth visiting.

In the section below, you can get one of our excursion, activities or city discovery tours over Montreal and surroundings. Our website offers 10-30% lower ticket prices, when compared to the offline purchase on the spot.

Plan your own excursion through Montreal: churches, museums and castles 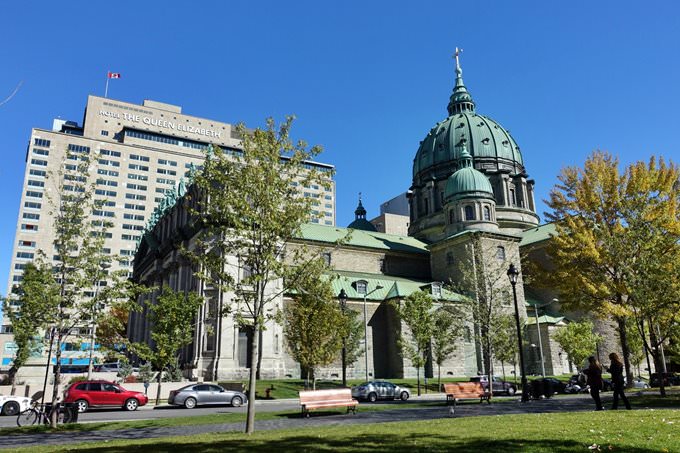 Facts:
» The Cathedral of Marie-Reine-du-Monde is a cathedral in Montreal that was built in the late 19th century.
»  The cathedral impresses with its beauty and luxury interior. The free entrance and daily services attract a lot of tourists.
»  Visitors of the cathedral are especially interested in beautiful statues of saint patrons of the city that decorate the facade.
»  High Gothic belfries of the cathedral are architectural attractions of the city.
»  Remarkably, the Cathedral of Marie-Reine-du-Monde is a small but exact copy of the Cathedral of St. Peter in Rome. Before the construction, the architect traveled to Rome to see masterpieces of famous Italian masters. 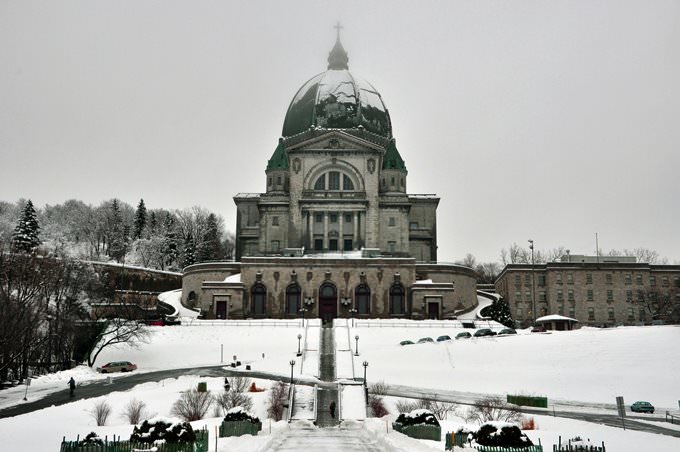 Facts:
» St. Joseph Oratory is a place of worship of millions of Catholic pilgrims from Canada and other countries.
»  The Oratory is located on top of Mount Royal and is viewed from any part of the city. To get it, many pilgrims go up 278 steps on their knees.
»  The Oratory is so big that it can accommodate about 10 000 believers.
»  Its dome is 129 m high and is the third highest building in the city.
»  It is believed that the walls of St. Joseph Oratory helps the injured be cured. In the cathedral, there is a wall, to which cured people attach their crutches. 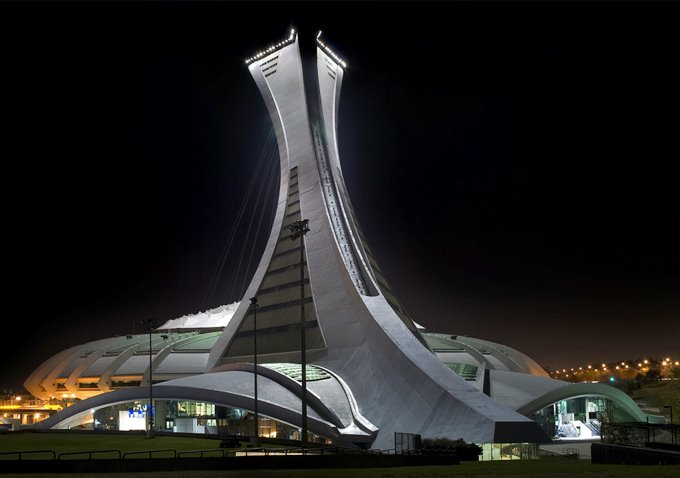 Facts:
» The Olympic Stadium in Montreal is the biggest stadium in Canada. It was built in 1976 and served as the main arena for the Summer Olympic Games.
»  The 175-meter tower with cables supporting the vault of the stadium is the most inclined construction in the world. Its inclination angle is 45 degrees.
»  If you visit an observation platform at the highest point of the tower, you will see that the stadium has the shape of a maple leaf. It is a symbol of Canada.
»  Nowadays, a lot of sports competitions, concerts, and art exhibitions are often held at the stadium. During the Olympics 1976, competitions in equestrianism, athletics, and 10 football matches were held here.
»  At the Olympic stadium, there are several swimming pools, gyms, and rooms for conferences and celebrations. 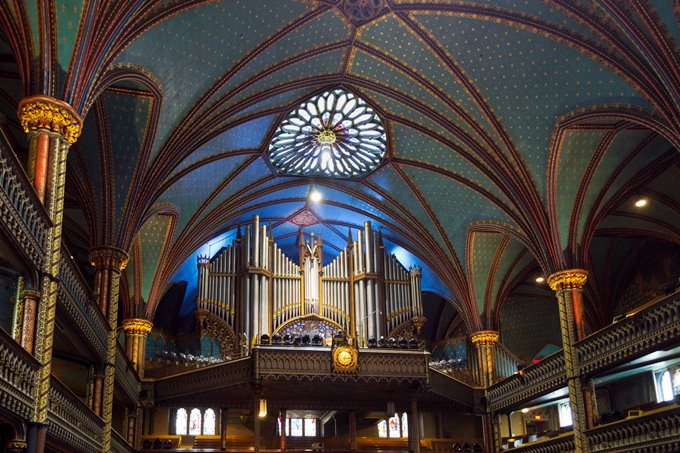 Facts:
» The Notre-Dame Basilica or Basilique Notre-Dame de Montreal is a magnificent Catholic church and one of the most popular attractions in Montreal.
»  The New Gothic cathedral has a luxury interior. Its columns and walls are decorated with gilded ornaments. Ceilings are decorated with moldings and frescoes.
»  In the cathedral, there are a lot of old paintings and statues. Moldings and old stained glass windows give the cathedral a special atmosphere.
»  You can also see here an ancient organ and a gorgeous altar.
»  In this beautiful cathedral, celebrities wedding ceremonies are often held.
»  In the evenings, you can watch sound-and-light shows and learn about the history of the cathedral. 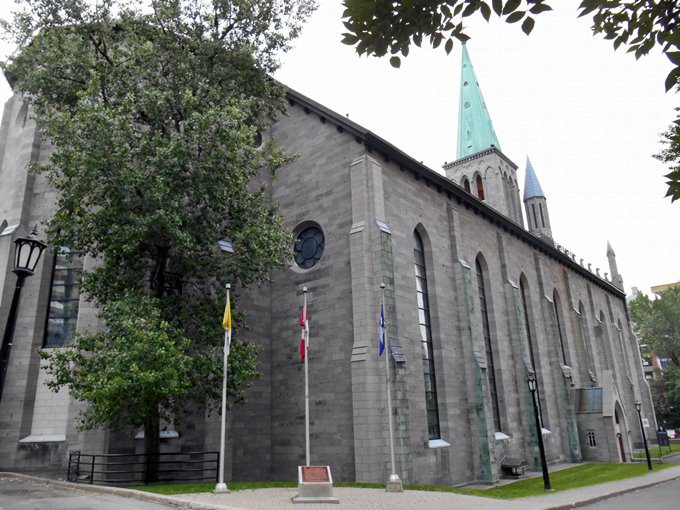 Facts:
» St Patrick's Basilica was built in 1847 for Irish immigrants. Their number increased in Montreal due to famine and other difficulties in Ireland.
»  Initially, the New Gothic church was built at the cape that has a view of the city. For many years, the city has grown fast. As a result, the church is surrounded by modern Montreal.
»  Not so long ago, St Patrick's Basilica was reconstructed for the fourth time. The reconstruction cost $5 million.
»  The windows of the church are decorated with beautiful stained glass windows depicting saints.
»  On the walls, you can see a lot of memorable plates dedicated to famous people who visited services or were baptized here.

This guide to cultural sights Montreal is protected by the copyright law. You can re-publish this content with mandatory attribution: direct and active hyperlink to www.orangesmile.com.
Montreal - guide chapters 1 2 3 4 5 6 7 8
Reference information
Map of all art museums

Cathedrals and basilicas near Montreal
♥   St. Patrick’s Basilica, Montréal, 4.1 km from the center. On the map

♥   Ancienne cathédrale Saint-Jacques, Montréal, 4.2 km from the center. On the map

♥   Cathédrale de Saint-Sauveur, Montréal, 5.1 km from the center. On the map

♥   Cathédrale Saint-Maron, Montréal, 6.7 km from the center. On the map

♥   Cocathédrale Saint-Antoine-de-Padoue, Longueuil, 8.9 km from the center. On the map

Photogallery of cultural heritage of Montreal

Excursions over cultural sights of neighbours of Montreal

Ottawa
Even though the theme of the museum lies in a rather serious domain the collection of the museum will be of great interest as for adults so for the youngest visitors. Ottawa exploration tour should necessarily include a visit of the Canadian Mint which has been running since 1908. Even though the main country mint is now located in Winnipeg, the mint of Ottawa continues the ... Open »
Quebec City
Guests of the city are certainly recommended to visit the Naval Museum of Quebec. This is the place where visitors can see a unique collection of artifacts and learn many interesting facts about life of sailors during the times of peace and war. The museum often hosts various interesting cultural events. For example, visitors can participate in watching old movies or attend ... Open »
Massachusetts
Travelers visiting New Bedford should definitely look into the New Bedford Whaling Museum. It was founded in the early 20th century; the museum's collection includes more than 2,500 exhibits, including original logbooks, maps and other maritime stuff. Many monuments are dedicated to outstanding historical events; one of the most remarkable memorials is located on top of Mount ... Open »
Cambridge
Curious travelers should definitely not forget to visit MIT (Massachusetts Institute of Technology). This is an interesting museum, which features all important inventions of the 20th century. Besides the observation of the great inventions present in the museum, visitors are welcome to make a walk through the picturesque park near the museum. The historic building is ... Open »
Boston
Boston Community is one of those sights that simply cannot be ignored. This name refers to the old quarter of the city; that place has also got the name "Little Italy" for its attractive and unusual architecture. Walking along the streets of this quarter will bring in many nice memories. The majority of the buildings here are small wooden houses built in the old English style. ... Open »

Culture guide to Montreal. Which fascinating sights to visit once you are in Montreal: temples, churches, museums, theaters and castles. Recommendations (with addresses, phone numbers and links) on the places 'must visit' in Montreal. Plan your own city excursion by using this page info!