Video of flights over top monuments of Milan in HD format.
Use 'Full Screen' mode.
Galleria Vittorio Emanuele II, Santa Maria delle Grazie, Basilica of San Lorenzo, and Giuseppe Meazza are the architectural landmarks, the names of which always remind you the words 'Milan' and 'Italy'. And this is natural, since these prominent landmarks are the ones that shape the historical and architectural look of Milan. Let’s look at these landmarks from high above, namely, from a bird’s eye view – click the video and make a flight over the architectural ensemble of Milan. In the main article, you can also read the most interesting facts about every famous landmark of Milan. 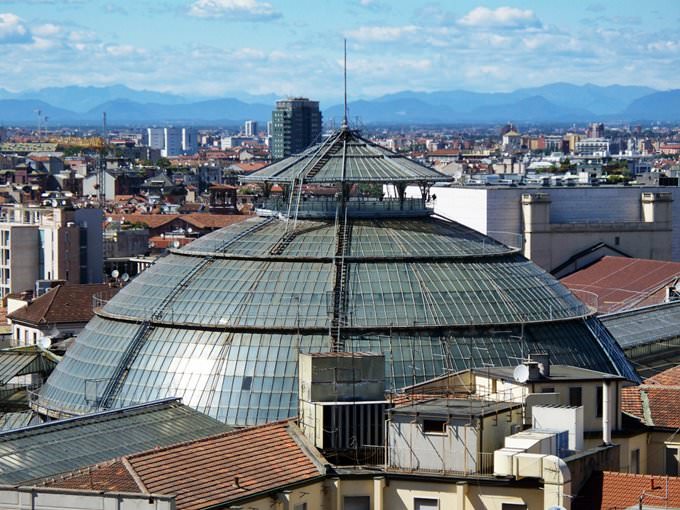 Facts:
» The Galleria Vittorio Emanuele II is the shopping mall in Milan, one of the first European passages.
» The gallery bears the name of King Victor Emmanuel II.
» The building of the gallery was built by architect Giuseppe Mengoni, who died during construction.
» The building is designed in form of a Latin cross, which is decorated with mosaics depicting the four continents (except Australia), as well as allegories of art, agriculture, science and industry.
» The Galleria Vittorio Emanuele II is home to many famous shops (Gucci, Prada, Louis Vuitton), famous cafes and restaurants. The gallery also regularly hosts concerts and exhibitions. 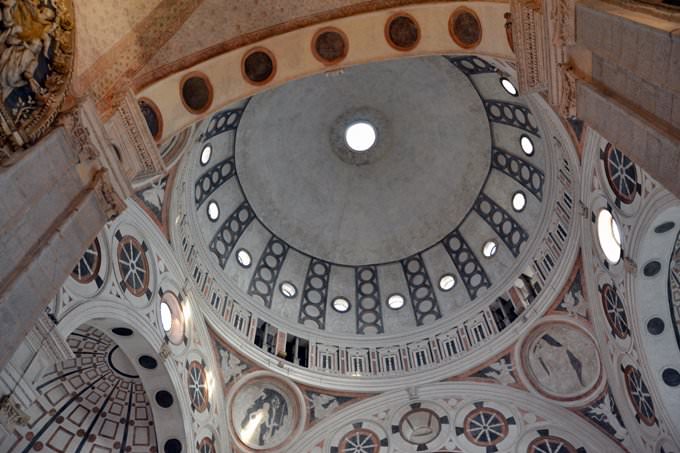 Facts:
» Santa Maria delle Grazie is the main church of the Dominican convent in Milan, included in the UNESCO World Heritage List.
» The church boasts one of the most famous frescoes in the world, The Last Supper by Leonardo da Vinci.
» During World War II the refectory of the church was bombed by Anglo-American air forces, but the fresco by Leonardo da Vinci has miraculously survived.
» There is admission fee in the temple. Visitors are allowed to spend there only a quarter of an hour; taking photos inside is prohibited. 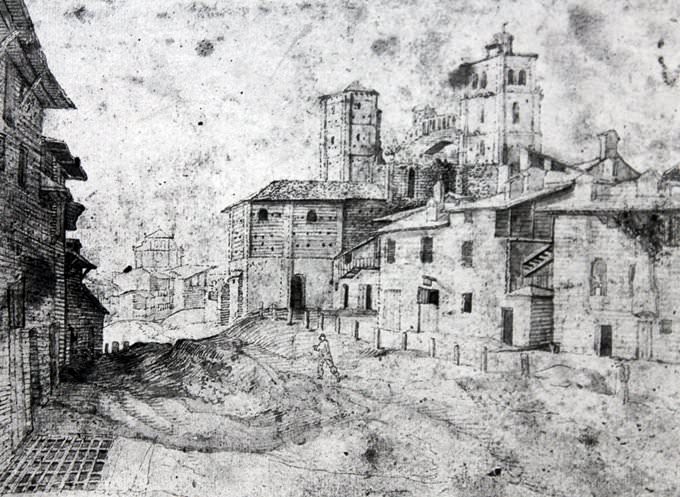 Facts:
» The Basilica of San Lorenzo is one of the most important places for Catholics in Milan.
» This basilica has been originally built during the reign of Roman Empire, and then over the centuries was being rebuilt several times. This is one of the oldest churches in Milan.
» Despite many changes, the original Byzantine structure with a dome and four towers, resembling the church of St. Sophia in Constantinople, survived to this day.
» The old baptistery and the Romanesque bell tower of the 12th century stands out among preliminary buildings on this site. 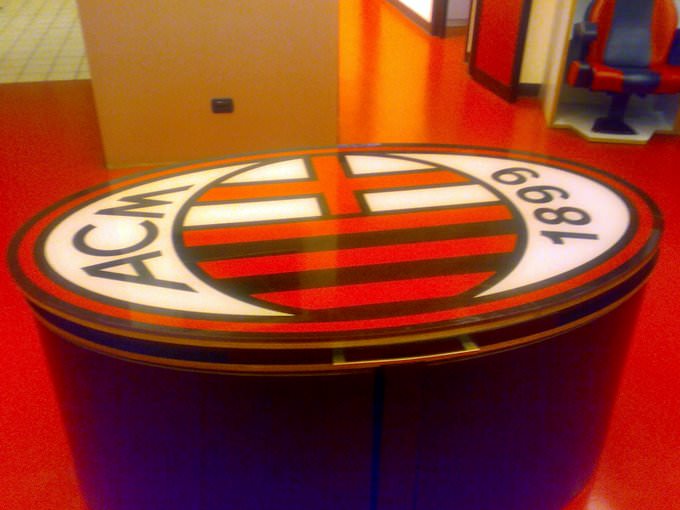 Facts:
» The Giuseppe Meazza stadium known also as San Siro is the football stadium in Milan, which is the home arena of the two football clubs, Milan and Inter.
» The stadium is named in honor of two-time world champion Giuseppe Meazza.
» The stadium was officially opened on 19 September 1926. Construction of the arena, in which about 120 builders were employed, took thirteen months.
» In 1986, the seat of the first tier of the stadium was painted in special color scheme: red in the camp of local fans, orange on the side of opponents; the northern gate, where most ardent fans usually sit, is of the green and blue.
» Recently, the first Italian Sports Museum was opened within the stadium. The museum houses more than 3,000 historical objects and curious items associated with legendary achievements of both Milan teams. 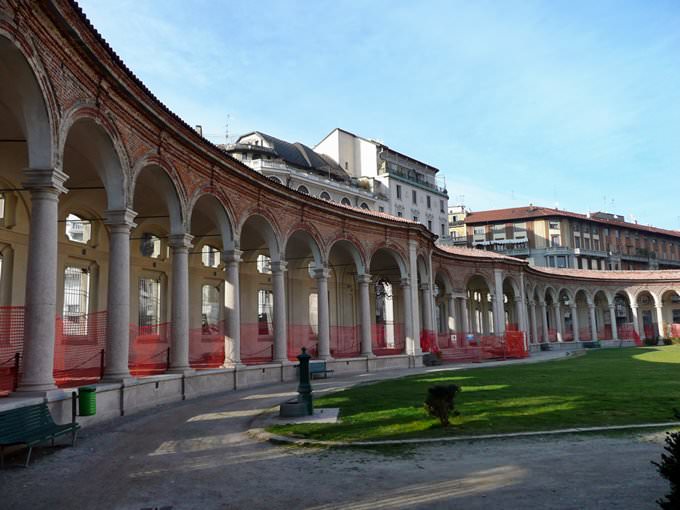 Facts:
» The Rotonda della Besana was built in Late Baroque style; it’s located in the center of Milan.
» The Rotonda has quite a varied past, as once it served as a cemetery at the hospital.
» Though initially this place was used as a cemetery, with time Rotonda della Besana has been adapted for a number of other purposes. Today it is a seating area and a venue for cultural activities.
» The entire complex includes a hexagonal portico with colonnades surrounding the magnificent garden with lawns and a church. 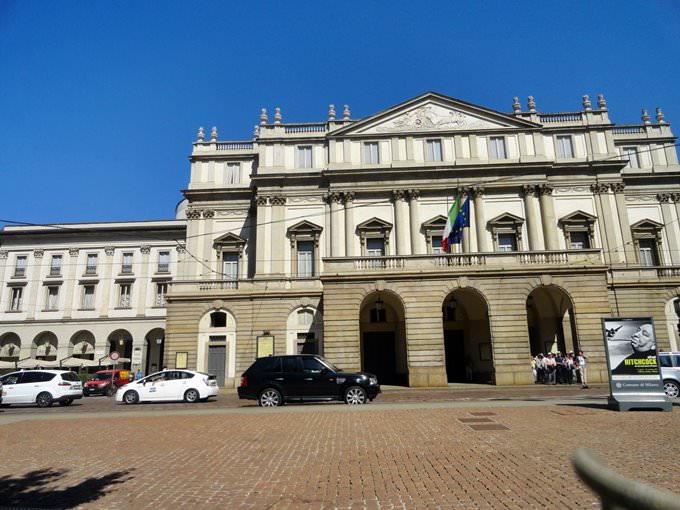 Facts:
» La Scala is the opera house in Milan.
» The Opera House was built in 1776-1778 years; it has got its name from the church of Santa Maria della Scala, as the theater was built on its site.
» La Scala is one of the most beautiful buildings in the world. It’s designed in simple neoclassical style and features flawless acoustics.
» Theater season at La Scala traditionally opens on December 7 at St. Ambrose, the feast day of the patron saint of Milan.
» The Theatre Museum, where you can get from the main hall, contains a collection of paintings, statues, costumes and other objects and documents related to La Scala and the history of opera as a whole.
» La Scala also has its own Academy of Arts, which aims to train a new generation of young musicians, technical staff and dancers.

Facts: » The Pirelli Tower is the 127-meter office building in Milan; for a long time it has been the second highest in Italy.
» The building is decorated with glass mosaic and outboard facade of glass and aluminum.
» Floors of the tower are made of rubber produced by Pirelli, painted in fantastic yellow color.
» Construction of the tower was initiated by the president of Pirelli Group, Alberto Pirelli, who wanted to build the first skyscraper in the country right on the spot where once, in the nineteenth century, the very first factory of Pirelli was situated.
» The Pirelli Tower has become a symbol of the final recovery of the Italian economy and the main attraction of the city.

Build your walking routes in Milan on the landmark map

Architectural landmarks in the regions around Milan