«« BEGINNING - PART I
Video of flights over top monuments of Milan in HD format.
Use 'Full Screen' mode.
In this article, dedicated to the architecture of Milan, we will 'fly' over such iconic historical monuments as Milan Cathedral, Sforza Castle, Basilica of Sant Ambrogio, and San Bernardino alle Ossa. In addition to the virtual flight video, we offer the most important and interesting facts about every landmark, including high-quality photographs. You can also use this article to make your own excursion tour in Milan. Simply use the icon

to locate the object of interest on the map of Milan. 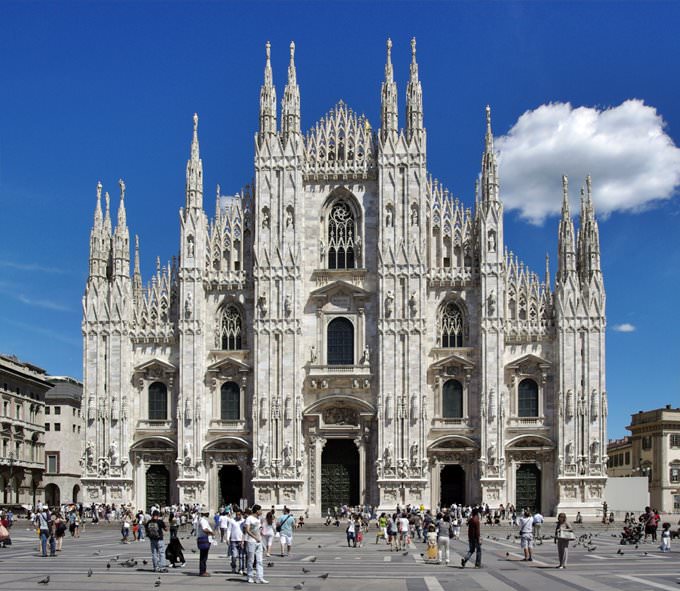 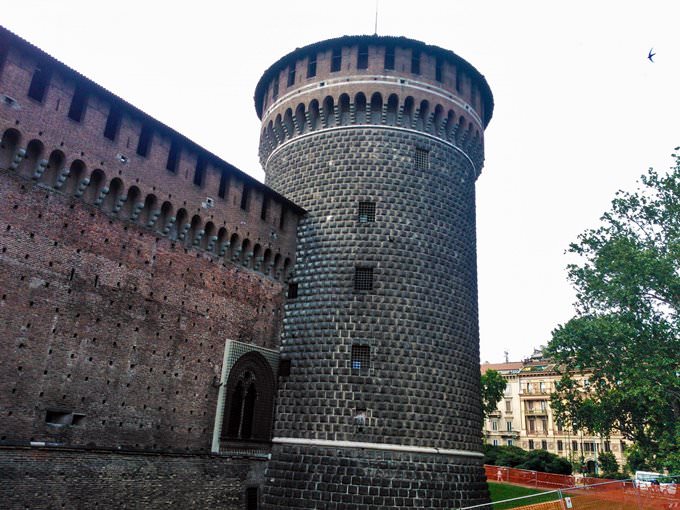 Facts:
» The Sforza Castle is one of the most famous castles in Italy, which is the residence of the Dukes of Milan of Sforza Dynasty.
» Currently, the Sforza Castle is a group of museums (dedicated to ancient Egypt, prehistoric era, musical instruments, utensils and others) featuring a single ticket for entrance (free admission on Fridays in the afternoon).
» The hall for ball games and elephant portico in the palace were perfectly preserved to this days.
» You can also see the last (unfinished) sculpture by Michelangelo, Pieta Rondanini, in the castle.
» The Sforza Castle can boast paintings by Mantegna, Giovanni Bellini, Filippino Lippi, Pontormo and Correggio, as well as a curious collection of musical instruments. 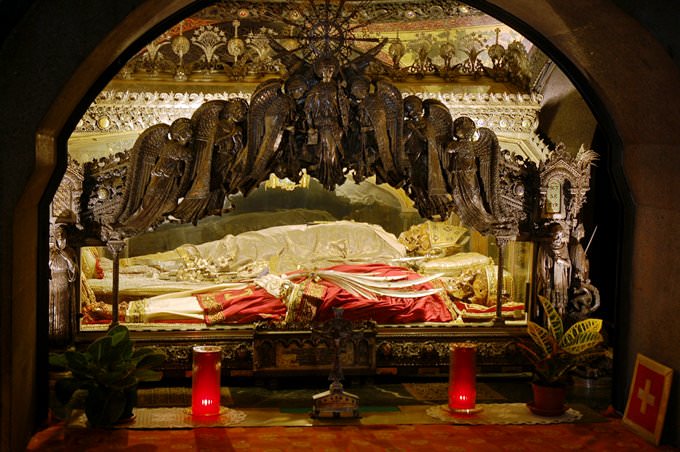 Facts:
» The Basilica of Sant Ambrogio is the church built in 379-386 AD by Ambrose Mediolano at the burial site of the early Christian martyrs in Milan.
» The first church was called the Basilica of the Martyrs.
» The church houses the relics of St. Ambrose, a priceless treasure for all Christians.
» Next to St. Ambrose relics of martyrs Gervasius and Protasius can be seen. The basilica is also the burial site for the remains of Emperor Louis II.
» There are many priceless ancient objects dating back to 4-9th centuries, as well as many beautiful frescoes of 14th century and mosaics of 6-8th centuries. 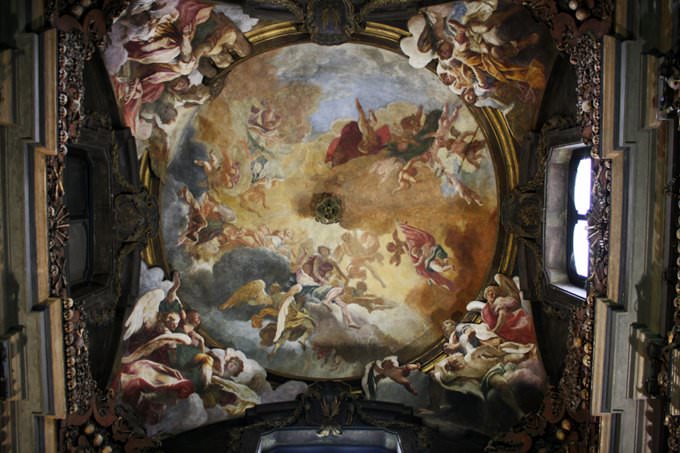 Facts:
» The San Bernardino alle Ossa is of interest to tourists because of its small chapel, which is decorated with skulls and human bones.
» All the bones were owned by city prison inmates who died in the hospital walls at Santo Stefano, as well as the ministers of the Basilica of San Bernardino.
» During the plague and famine, patients came to the church to pray amid of dead in hope that their prayer come faster in such a way. 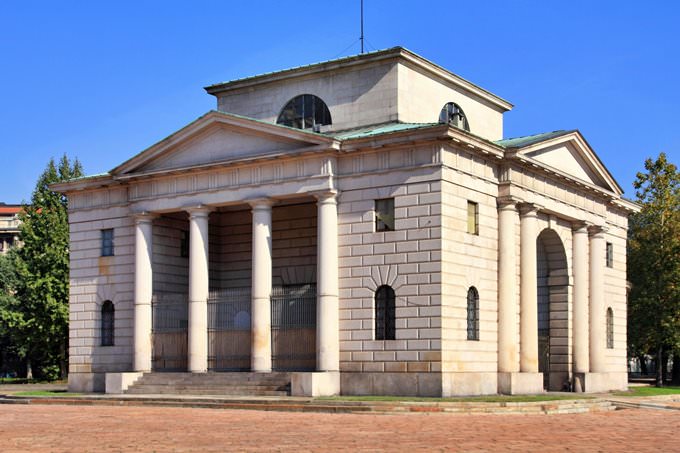 Facts:
» Construction of the granite Porta Sempione (it was designed as the arch of triumph) was started on the order of Napoleon in 1807 in honor of the victories of his troops on the Apennine Peninsula.
» Porta Sempione is located in the historic center of Milan and is decorated with the beautiful Sempione Park, lying right in front of the Castello Sforzesco.
» Initially, the bronze chariot that adorns the roof arches had been looking towards France, but after the political and geographical map of the world has changed, it was deployed to the center of Milan.
» It’s believed that the arch is oriented along the axis Paris-Milan and opens towards the historical axis of Paris. 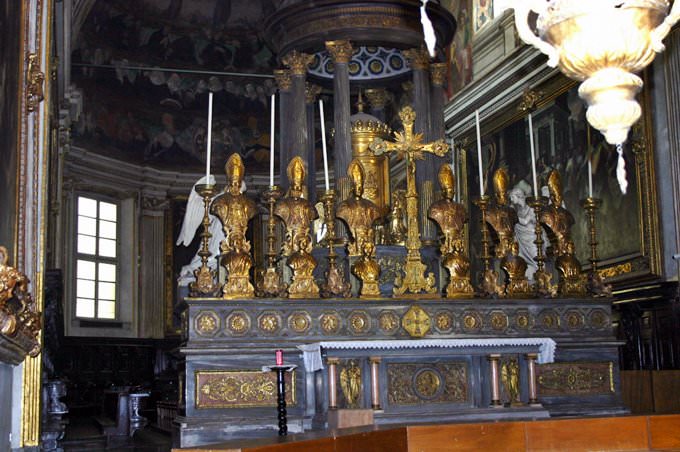 Facts:
» San Marco is one the oldest church in Milan, which was first mentioned in 1254.
» The San Marco Church is the largest religious building of the city after the Duomo.
» At the beginning of 1770, young Wolfgang Amadeus Mozart has lived in San Marco Church. Messa da Requiem by Giuseppe Verdi was performed there on May 22, 1874.
» The church houses the remains of many famous figures.
» San Marco features amazing medieval frescoes decorating its walls.

This guide to architecture monuments in Milan is protected by the copyright law. You can re-publish this content with mandatory attribution: direct and active hyperlink to www.orangesmile.com.
Milan - guide chapters 1 2 3 4 5 6 7 8 9 10 11 12 13 14 15 16

Plan your own tour over Milan on the monuments map

Search for architecture monuments of Milan on the map

Tours through neighbours of Milan