The main landmarks, such as Cathedral of Magdeburg, St.-Johannis-Kirche, Hyparschale, and Sternbrucke, attract thousands of visitors, who come to Magdeburg from different parts of the world every year. Magdeburg is incredibly rich in absolutely stunning landmarks and important historic sights. are true masterpieces of architecture and architectonics at the international level. It’s time to look at every landmark of Magdeburg in detail from an unusual point of view – interesting facts with hi-res photos, enriched with a virtual flight over 3D copies of all the architectural monuments. 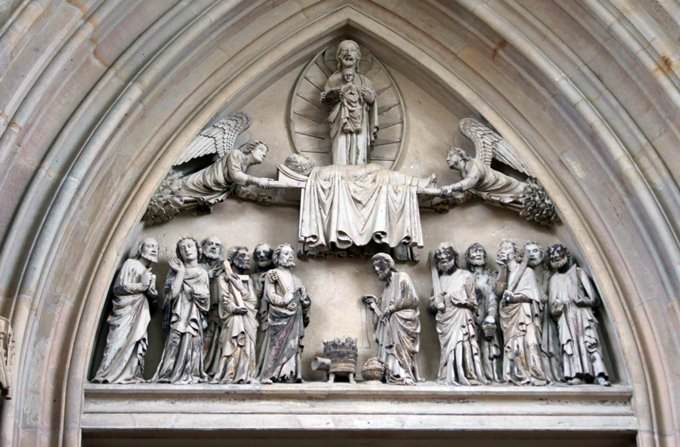 Facts:
» The cathedral is named after Saints Catherine and Maurice.
»  There used to be a basilica here.
»  After the fire of 1209, the archbishop commissioned the construction of a new cathedral. Having travelled a lot, he was aware of the popularity of Gothic and was eager to create a Gothic church too. It is now considered one of the oldest buildings of such style.
»  The construction lasted for over three hundred years and was completed in 1520.
»  The building stands out through its massive broken-like arches. The columns supporting them were taken from the old temple. They were once brought there by the emperor from Italy in 968.
»  The figures of the Ten Virgins — five crying, the rest rejoicing — are installed in the hall. The meaning of the installation is clear for those familiar with the parable of Christ.
»  The tomb of the ruler, the founder of the Roman state, is placed along the wall. Oak seats for parishioners are decorated with carved scenes from the life of Jesus.
»  The face of the statue of Maurice emphasizes his African features naturally. He was the first African depicted in a European sculpture.
»  The bell tower is a hundred metres tall. The belfry has 5 bells cast in the Middle Ages. 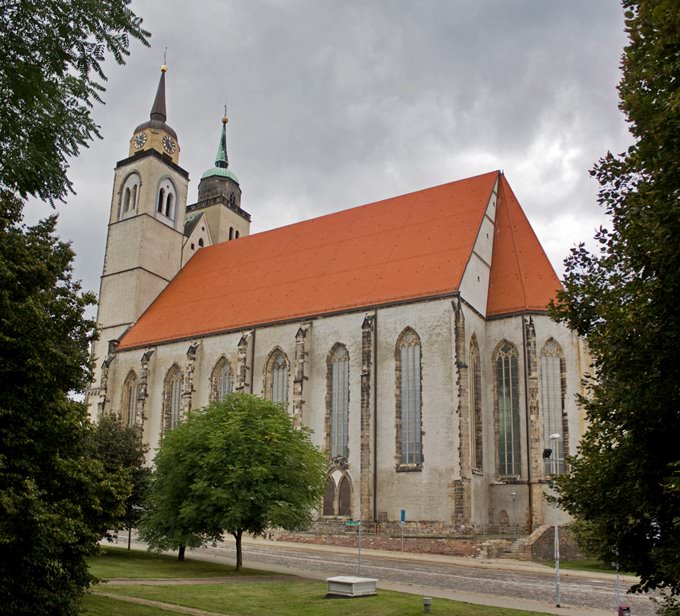 Facts:
» The church was erected in 1131. It is considered one of the oldest city buildings.
»  The Church of St. John survived lots of natural disasters and was damaged by humans several times. In 1451, the tower was struck by lightning. During the fire, it got burnt from the outside. In 1630, the spire was broken by a hurricane. During the Thirty Years’ War, enemy troops damaged the entrance doors and killed the priests. In 1806, French soldiers turned the hall into barracks. In January 1945, as a result of an air raid, bombs hit the church. Only the exterior facade managed to survive. But the cathedral was restored each time it was damaged.
»  In June 1524, the Christian theologian Martin Luther delivered a speech on violations of the Catholic Church before a large crowd, which influenced many parishioners to convert to Protestantism. A monument to the great reformer erected in front of the house of God in 1886 reminds of those distant events.
»  The church was fully restored 46 years after the Second World War.
»  Nowadays, the cathedral is not used for religious purposes. Various concert events are held here now.
»  The building is covered with a bright tiled roof. The picturesque roof makes the church visible from afar. 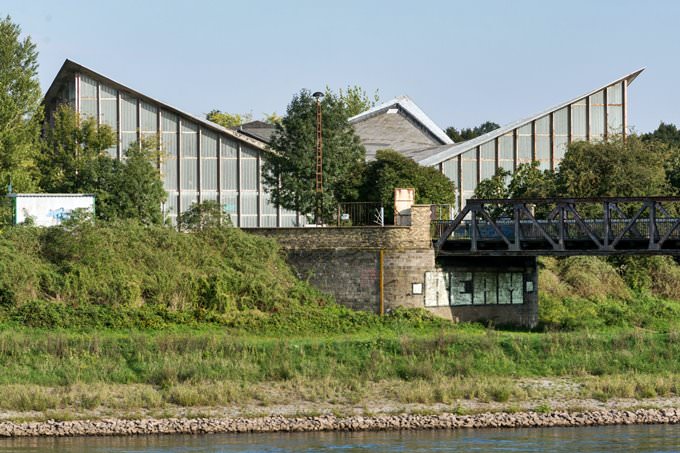 Facts:
» The Hyparschale Exhibition Centre is located in Rotehorn Park.
»  The building was designed by a German engineer. Reinforced concrete blocks were used for its construction. The facing is made up of four geometric shapes resembling paraboloids. Each block is 24x24 in size and has a span of 48 metres. The shell is 7 cm thick. The outer walls are covered with glass. The area of the hall is 2,300 square metres.
»  The frame construction seems to consist of inclined supports. The outer surface is not supported by columns. Such structure allows daylight to penetrate through the dome and side walls.
»  Translucent glass filters sunbeams in a special way ensuring diffused light in the hall.
»  The maximum height of the roof is 15 metres.
»  Since 1990, the building has been considered an architectural monument.
»  In 1997, the condition of the building was declared dangerous, and it has been closed since then. If the municipality allocates money for reconstruction, the complex will be restored, otherwise it will be demolished. At the 2017 city council meeting, the mayor decided to allocate funds in the amount of 1.7 million euros for the restoration process. 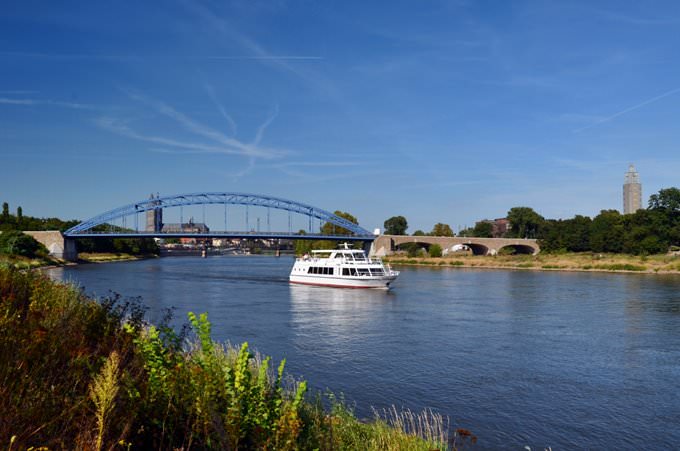 Facts:
» Local residents consider the Star Bridge a city landmark and like walking across it. It connects the settlement with an island where an amusement park is located.
»  The present-day construction was erected in 2005. The opening coincided with the celebration of the 1200th anniversary of the city.
»  Concrete and steel served as building materials. A distinctive feature of the bridge structure is a steel arc above the supports.
»  It was constructed on the site of an old water overpass destroyed by retreating German troops in 1945, and it took three years to build it.
»  The bridge changed several names: first, it was named after Ebert the politician, then after the first president of the Weimar Republic, then after Hitler, the founder of Nazi Germany.
»  It was nicknamed the Star Bridge because of the metal stars adorning the tower-shaped supports.
»  The bridge is 242.2 metres long, 15.25 metres wide, and 20 metres high. The structure weighs about 900 tons.
»  The Treasury spent 18.7 million euros on the bridge construction.
»  There used to be tram rails on the bridge, but they were removed and substituted with a bicycle and pedestrian zones. Only light vehicles can cross the bridge. Separate lanes are laid for all categories.

Facts: » The church is dedicated to St. Ambrose of Milan.
»  The house of worship is located in the district of Sudenburg.
»  During the siege by the French army in 1812, the parish was destroyed by order of Napoleon as it was an obstacle for aimed shooting.
»  The building is neo-Gothic in style.
»  The construction began in 1875. The building was completed after the installation of crosses on the tower spire.
»  The main entrance to the church is located from the side of Halberstadterstrasse.
»  In December 1877, the religious building was consecrated.
»  Concerned citizens made financial contributions to the construction of the church.
»  A font is installed in the hall. The altar has characteristic frescoes.
»  The church acquired 3 bronze bells. However, they were later removed and remelted into French guns. Each bell has its own sound register.
»  During the Second World War, Ambrosius-Kirche managed to remain intact, unlike other churches that were hit by shells.
»  The church was renovated in 1959. A new altar was bought, the cathedra was moved to the side, and an organ was installed.

CONTINUE - PART II »»
This guide to architectural sightseeing in Magdeburg is protected by the copyright law. You can re-publish this content with mandatory attribution: direct and active hyperlink to www.orangesmile.com.
Magdeburg - guide chapters 1 2 3 4 5 6 7 8 9 10 11

Build your walking routes in Magdeburg on the landmark map Architectural landmarks in the regions around Magdeburg