In this article, dedicated to the architecture of Lviv, we will 'fly' over such iconic historical monuments as Lviv Theatre of Opera and Ballet, Church of Transfiguration, Bernardine Church and Monastery, and Lviv Railway Station. In addition to the virtual flight video, we offer the most important and interesting facts about every landmark, including high-quality photographs. You can also use this article to make your own excursion tour in Lviv. Simply use the icon

to locate the object of interest on the map of Lviv. 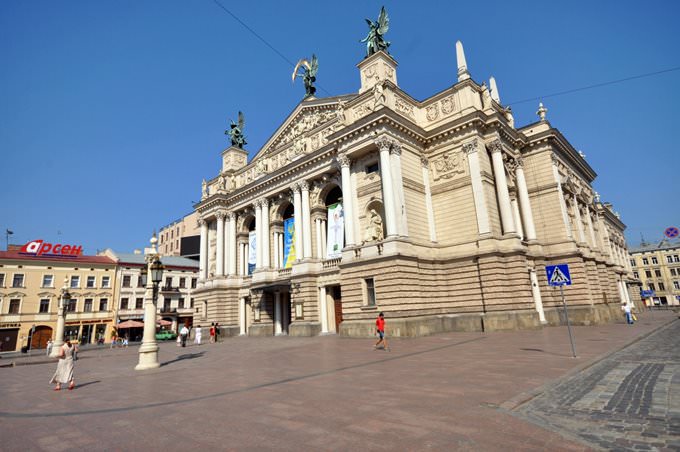 Facts:
» The theatre was designed by a European architect. He managed the construction that started in 1897.
»  The architectural complex is located on the avenue along the river.
»  For the first time, concrete blocks were used as the basis for a future building.
»  The construction lasted 36 months.
»  Money was allocated from the city budget, but citizens donated some amount as well.
»  The building was ventilated, heated, and electrified. The flooring in front of the main staircase was mosaicked. Bronze lamps with the heraldry of ancient Lviv are installed in the lobby.
»  The interior is decorated with gilding (several kilograms of gold were used), marble of various colours, stucco patterns, and decorative painting.
»  The auditorium resembles a lyre in form. It can accommodate a thousand spectators.
»  The official opening took place in October 1900 in the presence of delegations from different countries.
»  There are 90 musicians, over 40 vocalists, and 60 ballet dancers in the theatre.
»  The repertoire includes 50 vocal and ballet numbers.
»  The cultural institution is pictured on postage stamps, postcards, and banknotes. 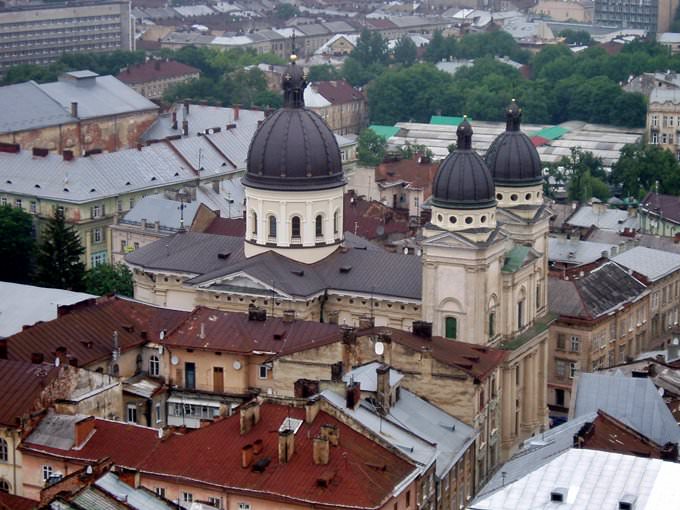 Facts:
» The Church of the Transfiguration grew from a cathedral where worshipers of the Holy Trinity held their services.
»  When Catholic monasteries were banned, the building was taken over by a university. The church was turned into a library.
»  During the rebellion of 1848, the church was destroyed. The only thing that managed to survive was its foundation.
»  30 years after, the construction of a Greek Catholic church began here, which dragged on for decades.
»  It took eight years to decorate the church outside and inside.
»  While being strict and having just a bit of stuccowork on the outside, the church is truly impressive inside. The interior is rich and has lots of thoroughly decorated elements.
»  12 huge windows under the dome let sunlight into the room illuminating the stucco on the walls and reflecting off the gilded details.
»  There are 12 statues of the followers of Jesus installed in the wall niches.
»  The Church of the Transfiguration stands on the foundation of a destroyed church.
»  The basement has underground passages and galleries. There used to be tombs in the crypt, which were reburied later.
»  The memorial plaque by the entrance says the church is named for the Transfiguration of Christ. 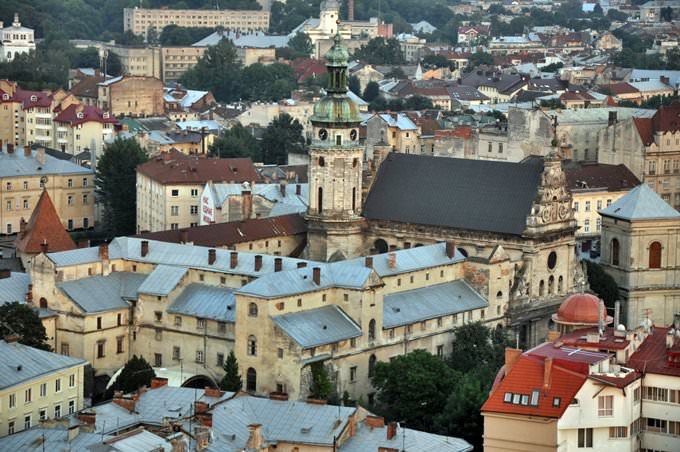 Facts:
» In 1460, having the town headman’s consent, members of the monastic order built the monastery. It was located outside the defensive fortifications, so there arose a need to surround it with a defensive barrier.
»  Over time, the shrine became an independent fortress with stone walls, loopholes, and a tower with an entrance. The additionally fortified point was surrounded by moats with water.
»  In 1630, the ashlar church, outbuildings, a room with cells, and a stable were constructed.
»  The church was named for Andreas Bemer, the architect who worked on the facade decoration.
»  In front of the house of worship, there’s a decorative pillar where a statue of Lviv’s patron saint used to stand. The cylindrical gazebo with a dome was also built to commemorate him. John of Dukla is buried in the monastery. It is believed that soon there appeared a spring with healing water from the grave.
»  A bell dating from 1588 used to hang on the belfry. To save the item from remelting in 1917, it was brought to the historical museum.
»  In 1784, an archive of ancient documents was created in the church.
»  During the Second World War, Jews used to hide from the Nazis in the underground tunnels. They left the dungeon only when Soviet troops arrived. 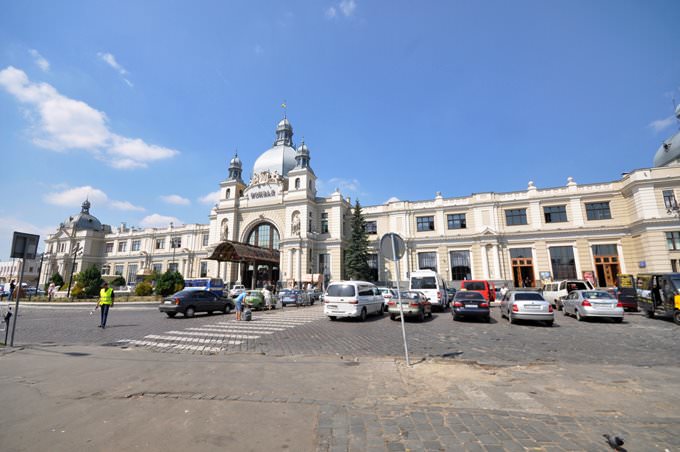 Facts:
» The railway station is considered the first major station in the country. It has 5 platforms.
»  In 1841, the Austrian government decided to reunite Vienna and Galicia through railway.
»  The start of construction was planned for 1858. 36 months after, the railway station was opened.
»  A train consisting of two passenger carriages and four platforms passed along the station.
»  Increasing passenger traffic led to the replacement of the old building with a new one. In 1904, the new construction was opened.
»  During the First World War, the facade was badly damaged by shells; canvases, statues, and the main entrance were completely destroyed.
»  The last reconstruction was done in 2003.
»  The building has distinctive architectural features. It is considered a local landmark for its stucco decoration and paintings.
»  There are forged seats installed on the platform and an arched canopy protecting from bad weather.
»  The inside rooms have modern infrastructure. Besides the required cash desks, waiting rooms, cafes, lounges, and retail outlets, there is a room where official delegations are received. 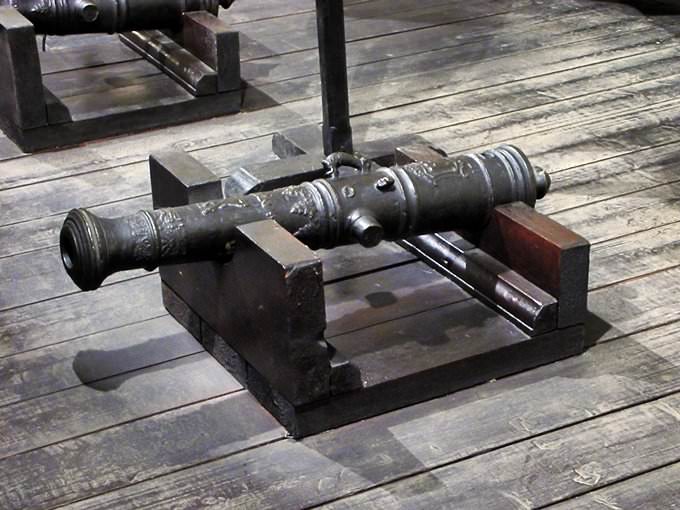 Facts:
» Medieval Lviv needed to protect its borders. The city institution, where weapons and ammunition were stored, repaired, assembled and where their records were kept, served that purpose.
»  Gunmakers cast guns right near the arsenal.
»  There used to be a prison. An executioner enforcing the death penalty lived in one of the rooms. There was also a torture chamber there.
»  The fortification was built in 1556.
»  The two-storey stone building resembled a rectangle in shape and had an octagonal tower on one of its sides.
»  During archaeological excavations, artefacts testifying to the fact that the barrier dated from the 14th century were found.
»  There’s currently a museum on the site. Its collection includes different types of weapons: cold, throwing, stabbing, cutting, firearms. There are also samples of protective technical equipment.
»  Cannon guns, armour, soldiers’ clothes, badges of military prowess, and even horse harness fragments collected from 30 countries are displayed on shelves and postaments. Flint and stone tools are the pride of the collection.
»  The museum has almost five thousand items in total.

This guide to architecture monuments in Lviv is protected by the copyright law. You can re-publish this content with mandatory attribution: direct and active hyperlink to www.orangesmile.com.
Lviv - guide chapters 1 2 3 4 5 6 7 8 9 10 11

Plan your own tour over Lviv on the monuments map

Search for architecture monuments of Lviv on the map

Tours through neighbours of Lviv