Of course, in order to feel the magnificent atmosphere of Luxembourg, one needs to visit this place, walk on charming streets of the historical center, visit local cafes, and enjoy the look of the local landmarks - Notre-Dame Cathedral, Saint Michael Church, Monument of Remembrance, Philharmonie Luxembourg, Sacred Heart Parish and many others. In order to make your virtual tour to the city more interactive, we offer an unusual opportunity to fly over every notable landmark of Luxembourg. Simply start the video, and use the full-screen mode. Each landmark comes with extra information, containing a collection of interesting facts and a photo gallery. Let’s go! 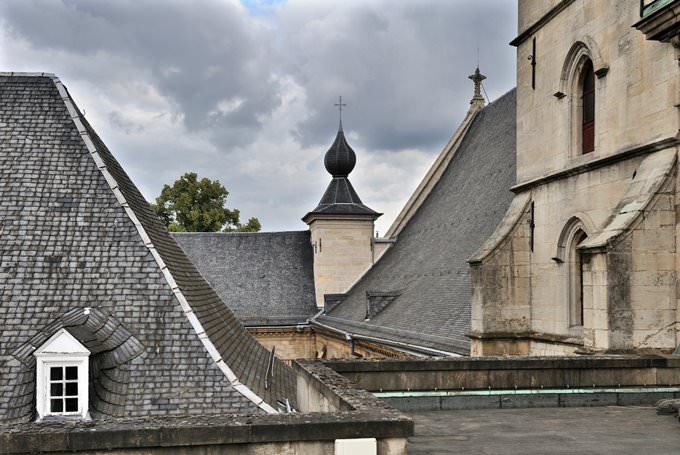 Facts:
» The cathedral was named after the Mother of God in 1848.
»  In 1613-1621, the building located in the southern district belonged to the Jesuits. In 150 years, when members of the Order were exiled outside the country, the church was given the icon of the city patroness. The house of God was named Notre-Dame Cathedral after her.
»  It had been constructed for 8 years since the beginning of the 17th century. The updated interior is designed in Neo-Gothic style of the 19th century. There are a lot of magnificent sculptures.
»  You can see here the icon of the Virgin holding the Infant Christ. It is made of wood.
»  There are two organs inside. One of them has 11 bells. The biggest organ has a diameter of 185 m. The bell tower was destroyed by fire. It was restored completely in 1985. The citizens still hear a melodious chime.
»  Here, you can see richly decorated tombs of the founding fathers of the city and the stone crypt with the ashes of the King of Bohemia, John the Blind. The crypt is located under the church. It is guarded by two bronze lions.
»  On Easter days, thousands of pilgrims visit the cathedral to pray to the Virgin. 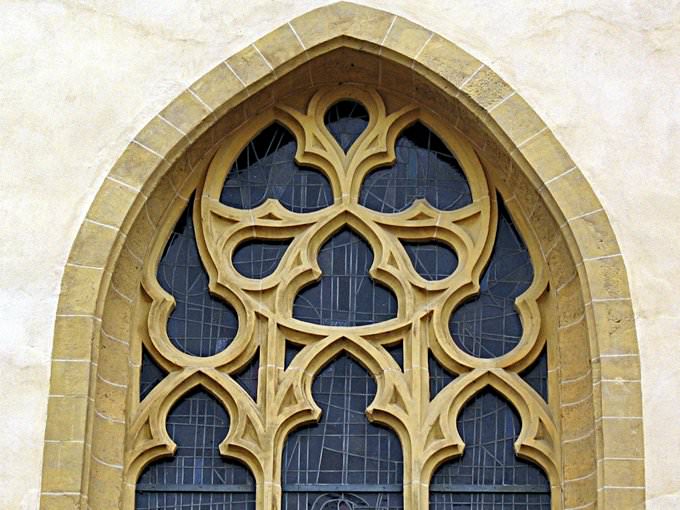 Facts:
» At Saint Michel Church, Catholic services are held.
»  In 987, the facility for private worships was constructed here. The building was destroyed and restored many times.
»  It has not changed since 1688. There is a preserved emblem in the form of three lines on the walls of the temple.
»  During the Revolution, the construction was saved from being destroyed completely by the icon of the saint with the crown resembling a Jacobin hood. The room served as an entertainment venue for the Jacobins. The altar turned to stage for theatrical performances. Revolutionary plays were staged here.
»  The church is named after the city intercessor. As the legend says, exactly Saint Michael saved citizens from the huge serpent that appeared from the lake. The sculpture of the savior (the 17th century) was placed in the deep niche at the entrance.
»  St. Michael’s Church was restored at the beginning of the 21st century (in 2004).
»  The altar is decorated with complicated intertwined elements. They create an elusive sense of space. The altar and Gothic vault were created in 1519. However, the only main entrance has left from the original chapel. 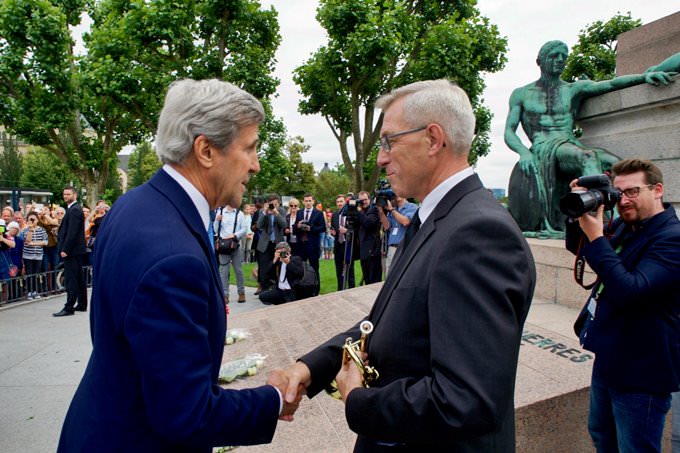 Facts:
» There is a monumental stela in honor of volunteers fallen in battlefields during the First World War. It is located in the central districts with a lot of buildings. The monument was constructed in 1923.
»  The citizens call the monument “Golden Lady”.
»  Thousands of union governments joining the volunteer army are a huge amount for Luxembourg.
»  The 21-meter cone column is faced with granite. There is a bronze and gilded statue of the woman. She holds the laurel wreath, the symbol of invincibility of soldiers’ spirit. Near it, there are two statues of men on the platform. One warrior is lying and the other is sitting. The surviving sitting man is mourning his comrade.
»  The German demolished the sculpture during occupation. The monument was restored by the fragments preserved.
»  Today, the stela embodies sorrow regarding soldiers dying during World War II and the Korean War.
»  In 1985, the restored and updated monument was opened for visitors.
»  When the world exhibition was organized in Shanghai, the statue of Gёlle Fra was temporarily exhibited in this city. 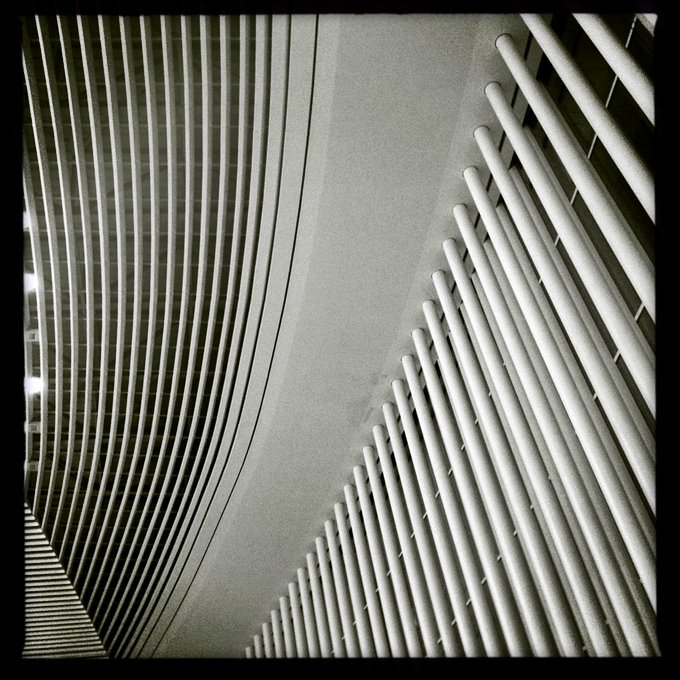 Facts:
» The exterior of the House of Music where the local Philharmonic is located matches its interior.
»  The building is surrounded by 823 high pillars. Columns of white steel are situated in four rows and support the dome. The concert platform is surrounded by multilevel lodges.
»  There are several halls inside. The Grand Auditorium is bigger than others and accommodates more spectators. 1 500 visitors can enjoy music at the same time.
»  It is possible due to the perfect acoustics made by modern technologies. It seems that every playgoer participates in music performances.
»  There is a hall with 13 seats and area for children’ performances.
»  When the Philharmonic was opened, the grand concert was organized. Over 200 young musicians demonstrated their mastership. The art event lasted until the evening. The festival lasted 8 days. At that time, 15 000 people visited concert halls.
»  Such a large-scale event became a tradition. Not only local musicians, but also creative people from other countries are invited.
»  The Philharmonic is named after Josephine Charlotte, the wife of Duke of Luxembourg.

Facts: » The Jack Welch Management Institute was opened with the support of the Ministry of Higher Education. It was founded just a few decades ago.
»  Offered programs will let students work in the financial sphere in the future. At Sacred Heart University, you can attend business classes.
»  Students can acquire education in the following spheres: trade management, modern technologies, art criticism, and social career.
»  5 700 students, including 2 400 foreigners, study here. Entrants from forty countries attend the university. A good education gives an impetus to further career development in EU companies.
»  The educational institution cooperates closely with 50 universities in other countries.
»  Methods of teaching intramural and extra-mural students were also developed. The university was founded in 1991. Its foundation was connected with the necessity to give future specialists an academic education.
»  Sacred Heart University is named after the founder and chief executive of the General Electric, John Welch. He advises the university administration. Facts: » The church was built at the beginning of the 14th century and was a part of the Benedictine monastery. The references to it date back to 1309.
»  It was constructed upon the order of Henry VII. The beginning of the 17th century was marked by the construction of the new building. It has been survived until today.
»  There is a painted altar with 3 shutters depicting scenes from the Holy Scripture. There is also a Gothic chapel for baptism. The organ was placed here. It was created in 1710.
»  Pilgrims from all over the world come here to bow to the miraculous sculpture. It depicts the Black Madonna. She holds a baby in one hand and a rod in the other. The sculpture is made of wood and installed over the main portal. The Black Madonna looks over the heads of worshipers. Her baby looks at the horizon. His hand is over the chest. His face has not a childish but adult impression.
»  The patroness watches over the weak and pregnant women. As the legend says, the wedding will be happy for those who come to see the Black Madonna.
»  There are two statues of saints at the sides of the doorway. They are dedicated to the nun and the priest.

CONTINUE - PART II »»
This guide to architectural sightseeing in Luxembourg is protected by the copyright law. You can re-publish this content with mandatory attribution: direct and active hyperlink to www.orangesmile.com.
Luxembourg - guide chapters 1 2 3 4 5 6 7 8 9 10 11 12 13 14 15 16

Build your walking routes in Luxembourg on the landmark map Architectural landmarks in the regions around Luxembourg

Trier
The cathedral dates back to 320. The Roman warlord Constantine ordered to build a cathedral. The Empress sacrificed her palace for the construction. There are still its remains in the foundation. The Normans almost destroyed the building in 882. It started to be restored in 1196. Originally, the building was built in the Roman style. At the beginning of the 18th century, clergymen decided to add baroque elements to the ... Open »
Liege
The city Catholic cathedral is named after St. Paul. It received the status of a cathedral in the 19th century. Local worshipers asked Napoleon for this. The treasury of the church was enriched with artifacts from other destroyed temples. The relics of Saint Lambert are kept here. The founder of the church is bishop Irakli. The building acquired its modern appearance in the 13th-15th century. There are also side belfries. In 1812, ... Open »
Aachen
The Roman Emperor wanted to build a palace with a prayer room. For this, architects from Rome and Byzantium were invited. Charles the Great was buried here. The sacred place with his remains has survived to this day. The prayer room is octagonal. Arched vaults are decorated with colorful stones. Wall panels are covered with mosaics. A 12-m forged chandelier is lead. It symbolizes celestial Jerusalem. It was gifted by Frederick ... Open »
Cologne
Cologne Cathedral is one of the world's most famous Roman Catholic cathedral built in the Gothic style. The cathedral reaching a height of 157 meters is ranked third in the list of the highest churches in the world and listed as a World Cultural Heritage. Construction of the temple was carried out in two stages, in 1248-1437 and in 1842-1880. The temple was rebuilt and restored several times. Near Cologne Cathedral there are ongoing ... Open »
Mainz
It’s truly impressive how architects of the first millennium were able to erect houses of great height and scale. The building is 116 meters long, and the tower is 83 meters high. It took more than 200 years to build the cathedral (975-1239), which was connected with the fire that destroyed the structure and looting during wars. The cathedral is faced with red sandstone which contrasts with the chapel built of light blocks. There are ... Open »
OrangeSmile.com - online travel reservation expert providing reliable car rental and hotel booking services. We feature more than 25.000 destinations with 12.000 rental offices and 200.000 hotels worldwide.
Secure Server