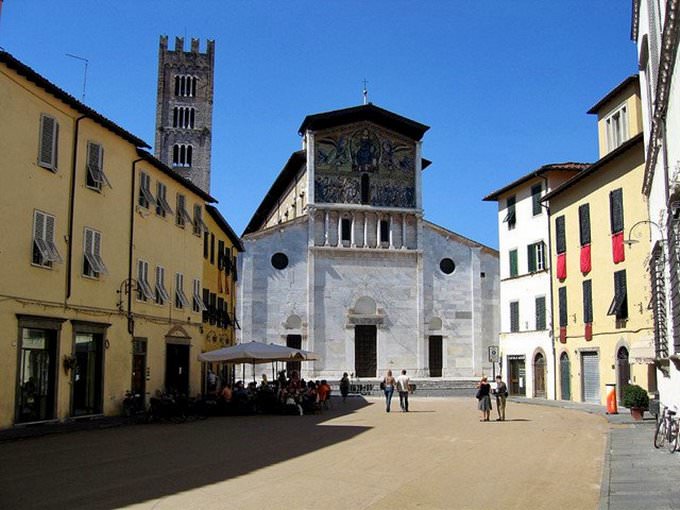 The first record about the city dates back to the 2nd century BC. The Lucca city has preserved the numerous historical landmarks and monuments. The main sights of the city are still the churches and cathedrals. One of the oldest religious buildings of the city is San Frediano basilica which is located in the north part of the historic city area. In the 6th century a small church was erected on this place and the first record of the basilica dates back to 685. The front of the majestic building is featured with fresco paintings, the interior of the basilica halls features the variety of interesting artifacts.
Your active city break in Lucca. Attractions, recreation and entertainment - best places to spend your day and night here
Visiting the local entertaining centers, shops and scenic natural sights will sufficiently enliven the tours over the historical places of the city. Lucca has a marvelous botanical garden …

Open
The original architectural building is the Torre Guinigi. The marvelous massive construction of 45m height is till the greatest tourist attraction. The reason is that the tower is equipped with an open air sightseeing platform. The platform is added with some greenery and benches for the visitors to sit and enjoy the marvelous panoramic scene of the city.
The permanent city symbol is the Cathedral placed in the heart of he Lucca city on the San Martino Square. The construction of the upscale building started in the 6th century and only two centuries later the small church obtained the status of cathedral. And in 780 the cathedral turned home to religious sanctity – the relics of Saint Regulus. The cathedral is attended today by many pilgrims to bow the grand relics. Copyright www.orangesmile.com
Advices to travellers: what you should know while being in Lucca
1. Travelers who are setting off to Lucca for the first time should undoubtedly visit the touristic center of APT Lucca Tourist Information Office. It is located near the Santa Maria square. …

Open
The inimitable architectural landmark of Lucca is the Palacco Pfanner which was erected in the 17th century. The majestic building with impressive front side is surrounded with massive stone enclosure, hiding the territory of ultimate beauty. The inner court features a great fountain with magnificent statuary group. During the tour the guests are offered to walk through the scenic garden. The palace literally sinks in garden greenery. 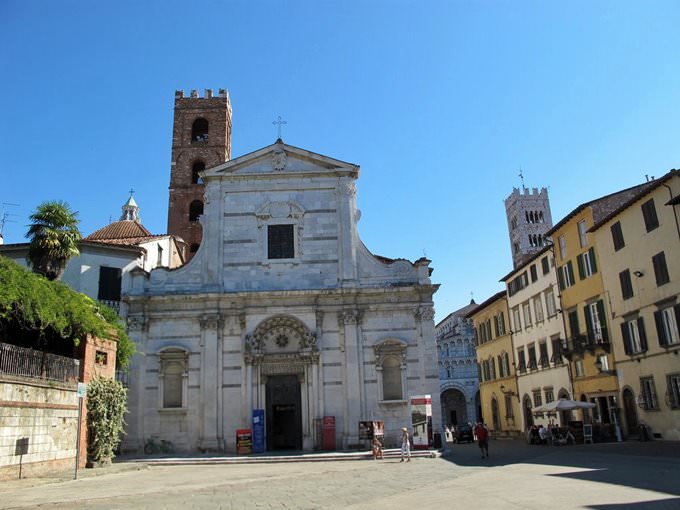 Not far from the Cathedral the Giglio theater is set. It is located on the del Giglio square. It is not only the main theater of the city but is one of the most famous theaters of Tuscany. Every city guest should visit this art temple as it features excellent stock of plays and exciting decoration of the hall. The significant landmark of Lucca is the amphitheater square. The upscale oval shape square surrounded with the buildings with red tile roofs really resembles the amphitheater. According to historical records this place hosted a big arena during the Roman Empire regimen.
Shopping in Lucca - main shopping streets, outlets and boutiques
In Lucca, it's worth paying attention not only to fashion stores but also to original gastronomic pavilions. La Boutique dei Golosi is considered an ideal place to choose wine and gourmet …

Open
The Italian city is forever associated with the name of Giacomo Puccini who is the most famous native of Lucca. Not only a monument to the great opera composer is erected and a festival in his honor is held here - you can also find the house museum where he was born (Casa Natale di Giacomo Puccini). The mansion stores original furniture, items that belonged to the composer, the most valuable of which are rare musical scores and letters of the musician. No less remarkable is a piano bought by Giacomo Puccini in 1901, on which he wrote most of his priceless works (above all, the opera Turandot). The piano was restored to its original sound in 2006.

The magnificent architecture of San Michele in Foro is not the only thing that attracts foreign guests - the church is also interesting for its history. The first records testifying to the presence of the church in its present place date back to the year 795. The basilica was redesigned in the Romanesque style in the 14th century - in particular, the facade was slightly changed. The second restoration of the church took place in the 19th century when Gothic bas-reliefs and sculptures were added to it. Now, thanks to all these changes, the basilica is one of the most prominent monuments of Romanesque-Gothic architecture in all of Tuscany.
Guide to Lucca sightseeing - things to see and to visit
Lucca is a charming Italian town in Tuscany, which is located not far away from Pisa. The city was founded on the site of the Ligurian settlement and the Roman military camp. Lucca has …

Open
Lucca boasts a beautiful railway station (Stazione de Lucca), from which many newcomers begin acquaintance with the city. First of all, the building is attractive with its facade designed by the architect Vincenzo Pardini. The rest of the building was worked on by the engineer Enrico Polmeyer, and due to this collaboration, the beautiful building combines functionality and beauty. No less wonderful building is Villa Bernardini built in 1615 in the Renaissance style. In the past, the mansion was the family house of the Bernardini dynasty. Today, wedding ceremonies are organized inside and music concerts are held in its beautiful inner garden.

Despite the fact that aqueducts are primarily associated with the Roman Empire, the Acquedotto del Nottolini located in Lucca doesn't belong to the ancient Roman era, although historians do not exclude the fact that there was an underground aqueduct in the city in ancient times. The Aqueduct of Nottolini was built in 1833 according to the design of the royal architect Lorenzo Notollini and by order of Maria Luisa, Duchess of Lucca. The structure is also notable for the fact that it has been perfectly preserved until our days. However, it no longer fulfills its main function - water supply. At the same time, it copes with the other one, being a wonderful historical monument.
Family holidays with kids in Lucca. How to entertain your child, things to show to children.
Lucca will be a great place for a peaceful family holiday. The city has many interesting sights, museums, and beautiful parks for walking. There are also excellent entertainment centers for …

Open
The outstanding Museo Nazionale di Palazzo Mansi must be included in the list of important tourist attractions. This is a museum of "living history" where one can see how Italian aristocrats lived in different centuries. The building is striking in its rich interior. Furniture and works of art are perfectly preserved, recreating the atmosphere of the 18th-19th centuries. Among the exhibits, there are also vehicles and magnificent sculptures in the courtyard. The city has a cultural institution that will surely appeal to connoisseurs of contemporary art - this is about the Museo di Arte Contemporanea Lu.C.C.A.

Tourists should never pass by the Museo della Tortura, unless they are faint-hearted, as it presents the instruments of torture that were used in the Middle Ages. All that travelers have ever wanted to know about the horrible moments in the history of medieval Italy can be found here. However, there were positive moments in that period - as evidenced by the exhibition Le Macchine di Leonardo. Here you can see the embodied ideas of the great Tuscan artist and inventor, as well as copies of his drawings. The Collezione De Benedettis is shrouded in mysticism, being a unique cultural institution. Among the museum's exhibits are priceless artifacts for fans of everything mysterious like the “devil’s skull”, engravings with mythical animals, artifacts used in alchemy.

In the section below, you can get one of our excursion, activities or city discovery tours over Lucca and surroundings. Our website offers 10-30% lower ticket prices, when compared to the offline purchase on the spot.

City tours, excursions and tickets in Lucca and surroundings

This guide to cultural sights Lucca is protected by the copyright law. You can re-publish this content with mandatory attribution: direct and active hyperlink to www.orangesmile.com.
Lucca - guide chapters 1 2 3 4 5 6 7 8
Reference information
Map of all palaces

Public palaces near Lucca
♥   Palace 'Palazzo Pfanner' Lucca, 2.1 km from the center. On the map

Art galleries in Lucca and around
♥   Art museum 'Pisa Charterhouse' Pisa, 12.8 km from the center. On the map

♥   Art museum 'Camposanto Monumentale' Pisa, 14.1 km from the center. On the map

Cathedrals and basilicas near Lucca
♥   Basilica di S. Frediano, Lucca, 2.2 km from the center. On the map

Photogallery of cultural heritage of Lucca

Excursions over cultural sights of neighbours of Lucca

Pisa
The Tower of Pisa (Torre di Pisa) is undoubtedly the main city landmark and unique architectural object of world significance. Its unique architectural form has given the Tower of Pisa its worldwide fame. The erection of the tower was started in 1173. The architectural masterpiece which the guests of the city may witness today is a result of numerous reconstructions and ... Open »
Viareggio
Viareggio is rich in architectural and historical monuments. All most important excursion sites are located in the historic district of the city. Here vacationers should visit St. Andrew Basilica. This amazing religious monument was built in the first half of the 19th century. Today the beautiful church is surrounded by lush vegetation. All tourists are welcome to look at the ... Open »
Livorno
One of the oldest buildings in town is Chiesa della Santissima Annunziata, which is also known under the unofficial name of “Greek Church”. It was built in the early 17th century for Greek sailors who arrived in Livorno to serve. Despite the fact that many years have passed since this important historical event, the nickname of the religious monument remains relevant. The ... Open »
Tuscany
Tuscany doesn’t cease to attract tourists with its rich cultural heritage, scenic nature and historical sites striking by their beauty and grandeur. Fans of painting know Tuscany as the birthplace of world-renowned artists, including Leonardo da Vinci and Michelangelo. One of the most famous sights of the region is the Leaning Tower of Pisa. Built in the first half of the ... Open »
Florence
House of Dante is surely a vibrant cultural attraction of the city. A beautiful old mansion - the birthplace of the world-renowned poet – has been turned into a museum. Modern Art Gallery, which exhibits a collection of works by Italian artists of the Renaissance, can simply not be ignored. The gallery often hosts exhibitions by young artists. In the famous Palatine Gallery ... Open »

Culture guide to Lucca. Which fascinating sights to visit once you are in Lucca: temples, churches, museums, theaters and castles. Recommendations (with addresses, phone numbers and links) on the places 'must visit' in Lucca. Plan your own city excursion by using this page info!