Sightseeing in Lourdes - what to see. Complete travel guide 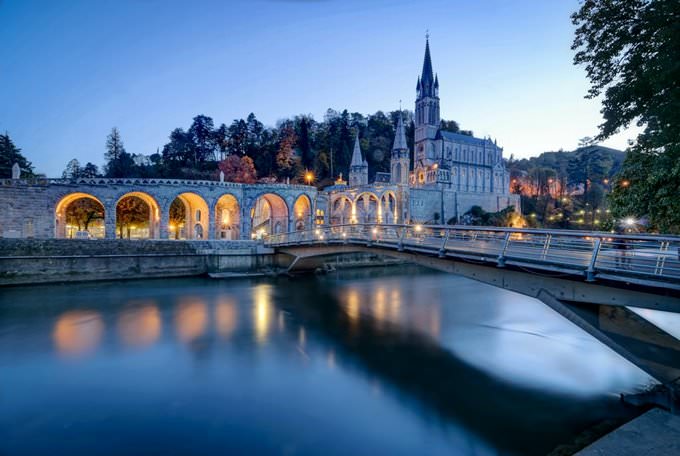 Lourdes is one of the most important pilgrimage centers of Western Europe accommodating many iconic religious sites. Lourdes lies in the foothills of the Pyrenees

, surrounded by idyllic mountain landscapes. The old picturesque town became a religious center after the significant event that took place on February 11, 1858. According to one of the legends, that day the Virgin Mary appeared to Bernadette Soubirous, then a 14-year-old local girl. This happened in the Caves Massabel, afterward, the Holy Virgin appeared to the girl 17 more times.
Authentic traditions, festivals and lifestyle of Lourdes inhabitants
Try to learn at least a dozen simple phrases in French before you travel to Lourdes. Of course, many citizens speak English quite well. Almost everyone knows at least a little English but …

Open
Bernadette Soubirous's claims caused a huge resonance in social and religious circles. The girl was repeatedly questioned about her visions and subjected to numerous medical examinations, which revealed no deviations. The girl became a nun and was later canonized in 1933. Today Saint Bernadette is the patroness of Lourdes. More than 70,000 pilgrims from all over the world come here to worship unique religious shrines of the city. It is noteworthy that over the past 150 years, more than 7,000 cases of the miraculous healing of hopelessly sick people have been recorded, which makes the city even more mysterious and attractive.
Much of the city's attractions are somehow connected with religion, and the most popular memorable souvenirs that tourists buy in Lourdes are figures of saints and beautiful icons. A huge number of pilgrims who began to flock to the city in the middle of the 19th century contributed to the active development of the city's tourism infrastructure. Today, in terms of the number of hotels, Lourdes is inferior to the only city of France - Paris. The accompanying tourist infrastructure has been improving too. Copyright www.orangesmile.com
Excursion over cultural sights of Lourdes - 'must visit' points of interest
The main landmark of Lourdes and the goal of thousands of travelers is the Sanctuary of Our Lady of Lourdes. It was built on the very spot where the Virgin Mary first appeared to St. …

Open
The history of the city is quite common: in the 8th century, a fortress was built here, around which the first settlements later appeared. The new city was named after its founder who changed its name after the adoption of Christianity. Until the middle of the 14th century, Lourdes was one of the quietest cities in France. Later, during the Hundred Years War, the city was captured by the English conquerors and had remained under their rule until the 15th century. The fortress survived all the hardships of wartime and was subsequently used as a military garrison and prison. Today it is the most important historical symbol of Lourdes.

As mentioned above, Lourdes began to attract the first foreign guests in the second half of the 19th century. Priceless mineral springs were discovered in the city. Their discovery is the merit of Bernadette Soubirous; the location of the healing springs was indicated by the Virgin Mary during one of the visions. It is noteworthy that after the discovery the source turned out to be very dirty, but in the shortest possible time, it has been surprisingly cleared. It continues to amaze guests of the city with its purest water to the present day. Water from curative springs is poured into very beautiful glass containers adorned with silver - this is one of the most popular and symbolic local souvenirs.
Your active city break in Lourdes. Attractions, recreation and entertainment - best places to spend your day and night here
Lourdes is not only Holy places, architectural sights, and museums. There are also many opportunities for active recreation here. If you want, you can just get out to the Lac de Lourdes Lake …

Open
In the immediate vicinity of the healing springs, medical centers were established, in terms of the number of which Lourdes is one of the country's confident leaders. The city would be a great destination not only for those interested in religious sites and wishing to find miraculous healing. Being located in a wonderfully beautiful natural area, it is extremely popular among eco-tourists. Lourdes is also sure to please fans of excursions - the city has managed to retain its unique medieval charm and a wide range of cultural traditions. 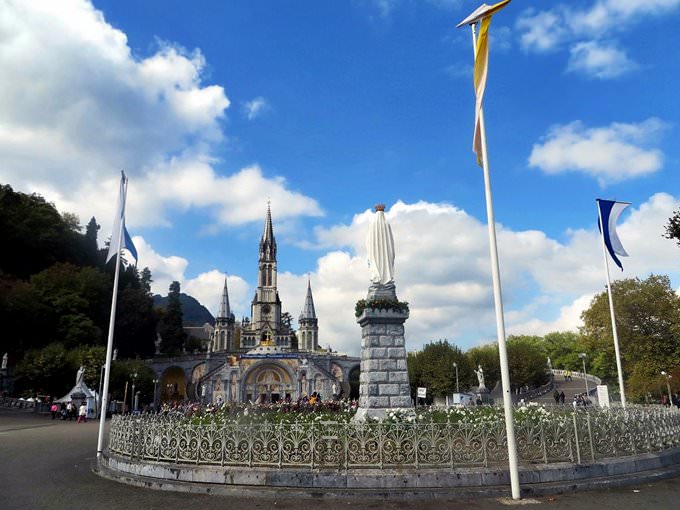 House Museum of Bernadette Soubirous is a signature landmark of Lourdes. Absolutely everyone is welcome to see the old house, in which a girl, who later became the saint patron of the city, was born and spent her first years of life. Nowadays, her house exhibits an interesting collection of historical and religious artifacts. Besides that, there is a wax figure museum in Lourdes, the exhibition of which is also in some way dedicated to the religious theme.
Top hotels in Lourdes for business trip or short vacation
Lourdes offers a huge selection of hotels, some of which are housed in beautiful historic buildings, while the others are trying to attract guests with their exclusive services. The most …

Open
Fans of natural landmarks will also not be disappointed in this miniature historic town. The Pyrenees National Park starts not far from the settlement. The majority of interesting hiking trails are available to tourists in warmer months. This is the time when vacationers can explore the gorgeous mountain region, climb up several hills, and admire the breathtaking panorama that they offer. 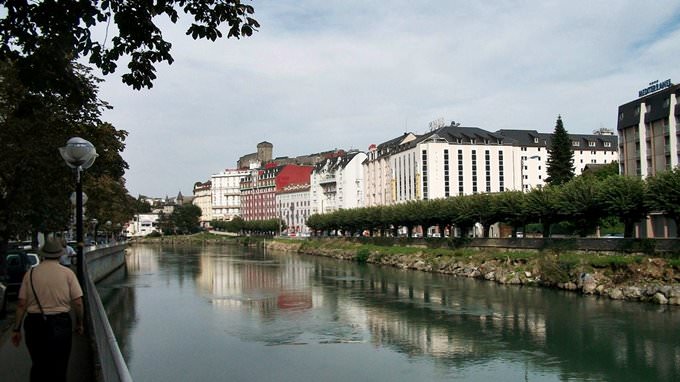 Lourdes is particularly full of travelers and pilgrims in the period from April until October. If you plan to visit the resort during these months, it is better to book a hotel in advance. It is also important to mention that prices are quite affordable in local hotels and restaurants despite hundreds of thousands of tourists who visit this resort every year. It is not hard to book a room for 100 dollars a night even at a high-class hotel.

This guide to iconic landmarks and sights of Lourdes is protected by the copyright law. You can re-publish this content with mandatory attribution: direct and active hyperlink to www.orangesmile.com.
Lourdes - guide chapters 1 2 3 4 5 6 7 8

City tours, excursions and tickets in Lourdes and surroundings

Survived castles around Lourdes
♥   Castle 'Château de Lourdes' Hautes-Pyrénées, 0.9 km from the center. On the map

♥   Castle 'Château de Mauvezin' Hautes-Pyrénées, 26.3 km from the center. On the map

♥   Castle 'Château de Montaner' Pyrénées-Atlantiques, 28.2 km from the center. On the map

♥   Castle 'Château de Pau' Pyrénées-Atlantiques, 34.5 km from the center. On the map

National and city parks around Lourdes
♥   World Heritage Site 'Pyrénées - Mont Perdu' , 47.3 km from the center. On the map

Sights around Lourdes from our guide 'Extreme places on Earth' Distance from Lourdes center - 54.2 km.
The station went desolated in 70s of the last century. For several years, it was full of burglars and vandals. A new stage in the history of the old station began in 1985, when a scientific community became interested in it. For many years, scientists have searched for a suitable location for a secret lab. In the 80s the laboratory was set in the abandoned tunnels of the station. The test facility, which carried out various physical experiments, is still working now. That’s a protected object, so tourists are allowed visiting the building of the abandoned station only in the framework of organized tours. … Read further

Search touristic sites on the map of Lourdes

Sightseeing in regions nearby Lourdes

Formigal
Are you in a mood for some entertainment? Formigal is very popular with Spanish youth. In recent years, more young people from other countries started visiting this resort. Many of them know about Disco Marchica. It is open in El Portalet and is widely recognized as the best way to relax after a tough day of skiing. Such venues have a special term to describe them – ... Open »
Baqueira-Beret
This mountain resort is divided into three different zones, namely, Baqueira, Beret, and Bonaigua. The first zone is a perfect choice for visitors who only start alpine skiing. In Beret, there are not only ski trails but also other exciting activities such as dog sledding and parachute jumping. This zone has wide ski trails, so visitors can ski together with their friends. ... Open »
Huesca
Do you want to see the oldest Spanish fort? For this purpose, you need to go to the nearby town of Monzon and see the Monzon Castle built in the 10th century. If you want to learn more about Arabic architecture, this landmark is the best place to do this. During the fight for independence, Sancho Ramirez and his Aragonese troops captured the castle. The stronghold got new ... Open »
Aquitaine Region
Another wine making center is the city of Saint-Emilion. There are also various historical landmarks to see. One of them is an amazing Saint-Emilion Church, built back in 12th century. Carved into the rock, it has survived until nowadays and has also been declared the world-wide landmark. The complex was enhanced with extensive tunnel network. These days it is used as a ... Open »
Biarritz
Biarritz is the most beautiful and luxurious resort in the Atlantic. This city is located on the border of Spain and France, so, surely, such location is already a great opportunity to become popular and get many visitors. However, the town will be interesting from the point of its cultural life. Here there are ongoing festivals, fashion shows, concerts and premieres. This is ... Open »

All about Lourdes, France - sightseeings, attractions, touristic spots, architecture, history, culture and cuisine. Prepare your trip together with OrangeSmile.com - find out the 'must see' things in Lourdes, which places to visit, which excursions to take, where the breathtaking views are waiting for you. Planning your trip with this travel guide will help your to get the most out of Lourdes in few days.