«« BEGINNING - PART I
Video of flights over top monuments of Lisbon in HD format.
Use 'Full Screen' mode.
National Pantheon, Belem Tower, Monastery of Sao Vicente de Fora, Lisbon Cathedral, Estrela Basilica, MEO Arena, and Discoverers Monument are the next landmarks in the review. Just like in the beginning of the review, we have prepared a collection of historic facts and some awesome photographs for each of these top architecture monuments of Lisbon. Don’t forget to admire the look of these sights from a bird’s eye view. This view is available in the flyover video of the architectural skyline of Lisbon. After such a guide, it won’t be a hassle to make up a great plan of a real-life excursion tour in Lisbon. Ready, steady, go! 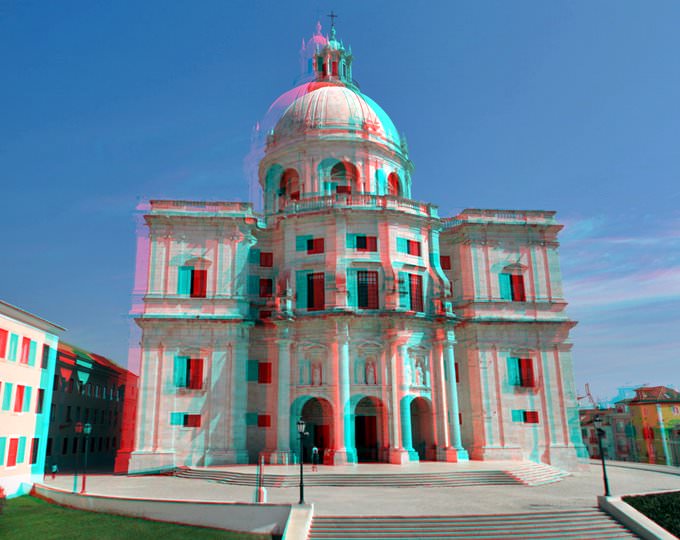 Facts:
» The National Pantheon is one of the most impressive sights of Lisbon.
» This building was called the National Pantheon only in 1966, during the reign of dictator Antonio De Oliveira Salazar; previously it was the St. Engrasia Church.
» The church was built in the 12th century in Portuguese Baroque style. Interior of the construction complements the exterior. The floor and walls of the building are decorated with colored marble patterns, and the organ of the 18th century was especially moved there from the Cathedral of Lisbon.
» Famous figures of Portugal, presidents, writers and many others are buried in the National Pantheon. There are also tombstones erected to perpetuate the memory of the famous explorers (Vasco da Gama, Henry the Navigator, and others.).
» The majestic building is decorated with a huge dome. At the base of the dome, at a height of 80 meters, there is an observation deck, which offers magnificent view of the city. 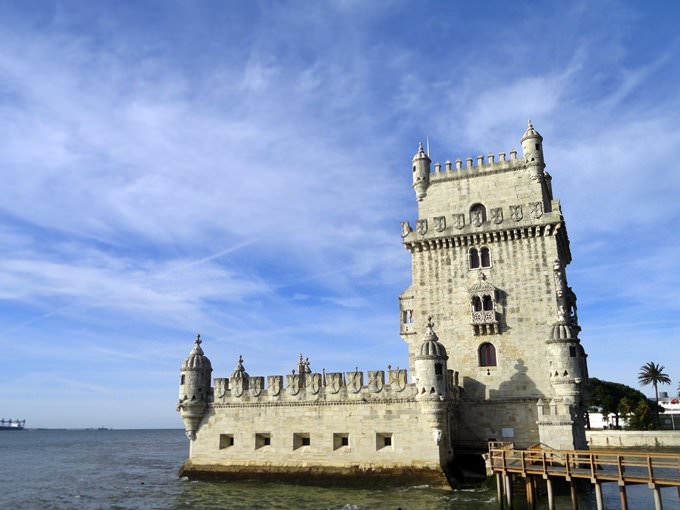 Facts:
» The Belem Tower is the fortified building on the island in the Tagus river. The tower is one of the symbols of Lisbon.
» The Belem Tower was built in 1515-1521 in honor of the Vasco da Gama sailing to India.
» The four-storey building of 35 meters was built in Manueline architectural style, examples of which are almost lost this day.
» During its existence, the structure has managed to serve as a small defensive fort, a gunpowder warehouse, customs and even a prison.
» Currently, the tower is declared UNESCO world heritage site. It’s open for tourists. 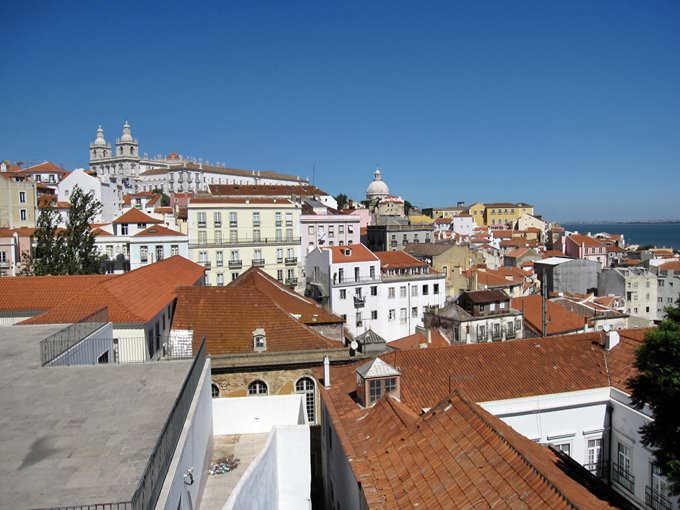 Facts:
» Sao Vicente de Fora is the monastery founded in 1147 by the first king of Portugal, Afonso I the Great.
» The monastery is dedicated to Vicente of Saragossa, the patron saint of Lisbon, an early Christian martyr.
» The monastery church in its current form was built in 1582-1629 years, while other buildings were completed only in the 18th century.
» All the kings of Braganza Dynasty, except two, are buried in the crypt of the monastery.
» All visitors can climb to the roof terrace and admire the magnificent views at the National Pantheon, Alfama and the Tagus River. 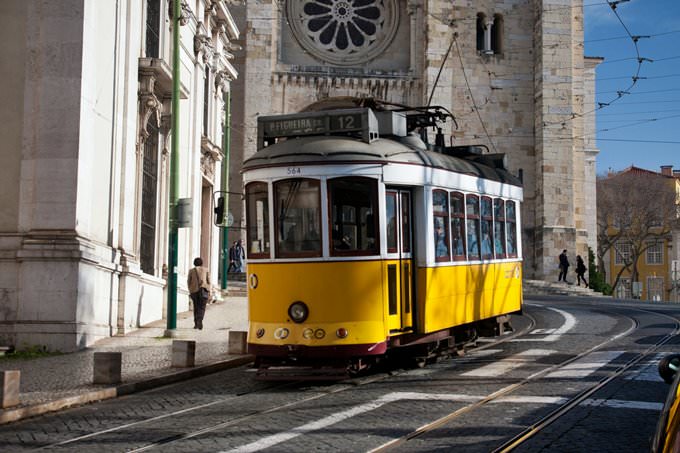 Facts:
» The Lisbon Cathedral is the cathedral of Lisbon patriarchy.
» It’s believed that earlier there has been a Roman temple on site of the present cathedral; in 4-5th centuries the former was turned into a Christian church. After a couple of centuries, there has been built a mosque that stood up to the 12th century; then the cathedral was built on that place.
» The Lisbon Cathedral is the building with three aisles, a transept and the main chapel. The main facade is framed by two towers; the monastery is to the east of the cathedral.
» Externally, the building of the cathedral resembles a fortress. Towers were observing sites in turbulent times, and their thick walls were completely devoid of windows in their lower parts, making them invulnerable to enemy attacks. Thanks to the thick walls, the cathedral withstood the destructive force of the 1755 earthquake.
» Nine Gothic chapels holding the remains of the great Portuguese, including King Alfonso IV and his wife Beatrice, are situated at the inner gallery.
» The treasury of the cathedral stores priestly vestments, silver products, sculptures, medieval manuscripts and sacred relics. 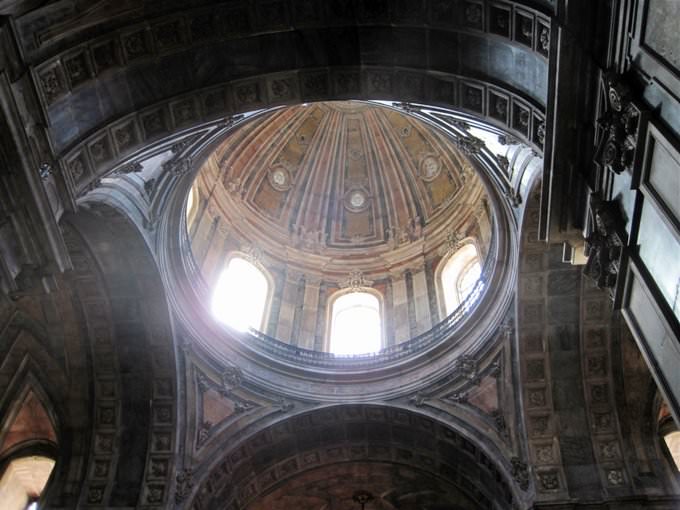 Facts:
» The Estrela Basilica was built by order of Queen Mary I of Portugal by a vow after the birth of her son Jose, Prince of Brazil.
» Construction of the basilica was finished in 1790, two years after the death of Jose from smallpox at the age of 27 years.
» The Basilica was built in Late Baroque style, but there are elements of classic architectural solutions.
» Marble of three types: gray, pink and yellow was used for construction.
» There are two belfries near the temple adorned with statues of the saints and allegorical figures. Paintings by Italian artist Pompeo Batoni can be seen inside.
»  The main attraction of the basilica is scene of the Nativity consisting of more than 500 figures. The basilica is also the tomb of Queen Mary I. Olissippo Lapa Palace – The Leading Hotels of the World , Rating 9,2

Facts: » MEO Arena is the multi-purpose indoor arena that is used for concerts, exhibitions and various sporting events.
» The arena was officially opened by the beginning of the World Expo 1998, held in Lisbon, during which it was called the Pavilion of Utopia.
» The scene is often compared to a spaceship. In general, the complex includes three departments, which can easily be combined to create a larger volume.
» In 2001, MEO Arena received the first prize of the International Olympic Committee and the International Association for Sports and Leisure in the category of facilities that serve for international competitions.
» Among the artists who performed at MEO Arena, Bob Dylan, Lady Gaga, Madonna, Ricky Martin, Kylie Minogue, Marilyn Manson, Shakira, and bands such as Depeche Mode, The Doors, Eagles, Metallica, Oasis, Rammstein, Red Hot Chili Peppers, Muse, Scorpions and The Who has to be mentioned. MEO Arena became the place of conducting MTV Europe Music Awards 2005.

Facts: » The Discoverers monument is dedicated to the outstanding figures of the Portuguese Age of Discovery.
» The height of the monument is 52 meters.
» The model of the monument was created in 1940, but the latter was opened only in 1960.
» The monument is a caravel of white limestone with the figure of the mastermind of the Portuguese geographical discoveries, Henry the Navigator, on the snout. He is surrounded with 32 other important personalities of the Age of Discovery, including monarchs, explorers, cartographers, artists, scientists and missionaries.
» Everybody can get inside the monument via elevator or climbing a height of 52 meters, where you can admire spectacular views.

This guide to architecture monuments in Lisbon is protected by the copyright law. You can re-publish this content with mandatory attribution: direct and active hyperlink to www.orangesmile.com.
Lisbon - guide chapters 1 2 3 4 5 6 7 8 9 10 11

Plan your own tour over Lisbon on the monuments map Search for architecture monuments of Lisbon on the map

Tours through neighbours of Lisbon

Porto
The Porto Cathedral is the oldest and most revered in the city. It started to be built in 1110. An urban settlement was gradually growing around it. For centuries, a lot of interesting events took place at the cathedral. In 1387, King John I and English Princess Philippa of Lancaster got married. The son of John I, Henry, was baptized here. He was called “a sailor”, although he never took part in expeditions but organized such ... Open »
Sevilla
The Seville Cathedral is currently the largest Gothic cathedral in Europe. The Cathedral was built in 1401 - 1519. The length of the cathedral is about 116 meters, and the width is 76 m. The height of the cathedral is 42 meters, and the height of the bell tower is 105 meters. The cathedral is notable for its numerous relics and treasures including paintings by Murillo, Velazquez, Zurbaran and Goya in the Cathedral Bell Tower. The temple is ... Open »
Madrid
Palacio de Cibeles was originally designed as the central office of the telephone service, post and telegraph of Spain. The post office was built in 1918 and was called the Palace of Communication. Palace of Communication now houses the City Hall. This monumental building, decorating the area, represents one of the four pillars of modern civilization, power. Palacio de Cibeles consists of two buildings integrated with each other. This ... Open »
San Sebastian
To build a summer cottage, the members of the Spanish royal family purchased the land at the coast of the bay. The residence was finished in 1893. The three-storey palace is located in the upper city. Servants lived on the upper floors. The basement was used for household needs. It is just a few meters from the beach. To link Antiguo with the other district of the city, the tunnel for vehicles was specifically built. The tunnel is dug ... Open »
Bordeaux
Cathedrale Saint-Andre was reconstructed many times. According to the chronicles, there had been buildings built in the 3rd century at the site. This construction was first mentioned in chronicles in 814. The Normans destroyed it. At the beginning of the 11th century, the first stone was laid in the cathedral's foundation in commemoration of the marriage of Louis VII and Eleanor of Aquitaine. In 1130, the northern Porte Royale ... Open »
OrangeSmile.com - online travel reservation expert providing reliable car rental and hotel booking services. We feature more than 25.000 destinations with 12.000 rental offices and 200.000 hotels worldwide.
Secure Server