Architecture of Latvia. Must see and must visit landmarks 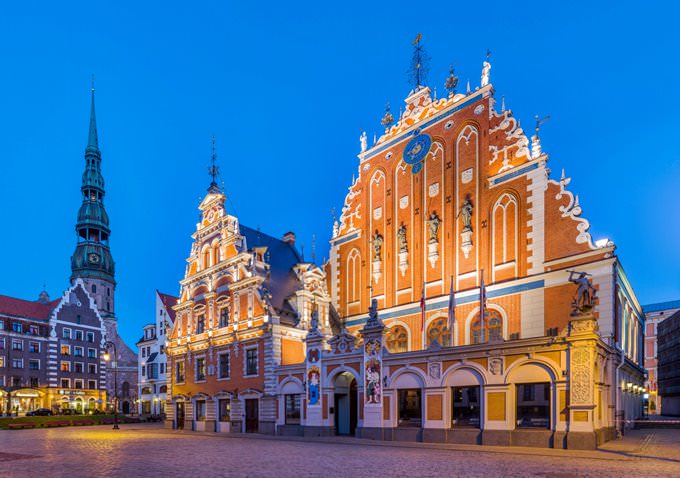 Interesting facts:
» The Church of St. Peter is a symbol of Riga. This ancient attraction is a UNESCO World Heritage site.
» The first mention of the church dates back to 1209.
» The building was destroyed by fires but was rebuilt every time. In 1721, Peter the Great fought the fire caused by lightning.
» The tower with a spire was reconstructed only in 20 years. 200 years after, in 1941, the tower was destroyed by a German shell on the St. Peter’s Day.
» A new spire that looks similar to the old one but is made of metal was constructed in 1973. There are also two observation platforms at a height of 57 m and 71 m.
» Before the TV Tower was built, the Church of St. Peter was the highest construction in the city. It is 123.5 m high.
» The first clock was installed on the tower in 1352. Now, the restored clock with one hour hand beats every hour and plays Latvian folk music. 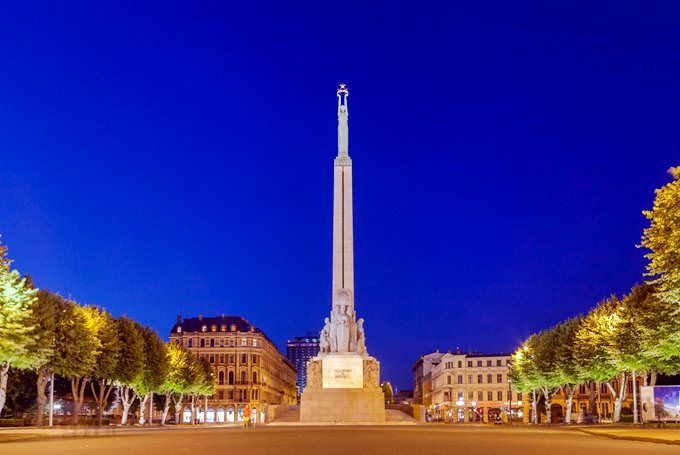 Interesting facts:
» The Freedom Monument to the soldiers who died for the independence of Latvia was installed in 1935. This monument was constructed on the funds donated by the people.
» It is 42 m high. The monument is crowned by 9-meter Liberty, a woman holding three stars that symbolize three historical regions of Latvia, Kurzeme, Vidzeme, and Latgale. At its foot, there are sculptures and bas-reliefs depicting legendary heroes of Latvia.
» In 1940, Latvia became a part of the USSR and the Soviet authorities wanted to dismantle the monument. This decision was discussed by Soviet authoritative sculptor V. I. Muhina (who was born in Riga), academician L. V. Rudnev (who lived in Riga), and architect Ernests Stalberg. Their opinion helped preserve the monument. When Latvia became independent in 1991, important national holidays are celebrated in the square.
» Near the Freedom Monument, you can always see the Guard of Honor. 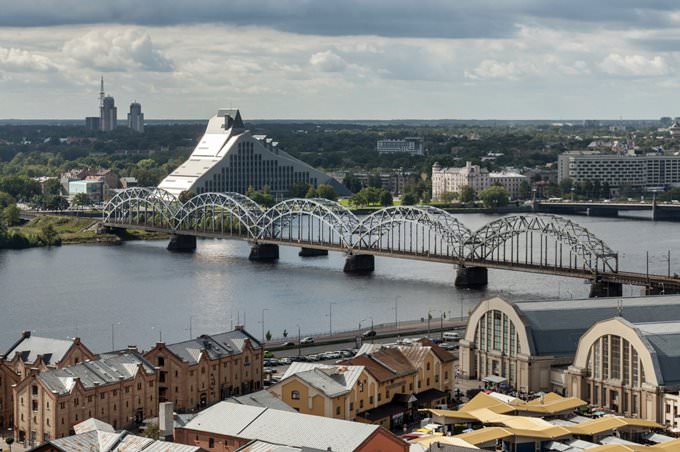 Interesting facts:
» The Latvian Academy of Sciences was founded in 1946.
» The Academy building was built in 1960. Originally, it was built as the House of Farmers. The city authorities changed their minds and established an academic institution here.
» The Academy resembles Stalinist apartment houses. There are only two buildings of such type in Eastern Europe, in Riga and in Warsaw. In 2003, the building received a banner as an architectural monument of the 20th century.
» The Academy has 21 floors. On the 16th floor, there is an observation platform that has a panoramic view of Riga.
» When the Baltic countries gained independence, the Communistic symbols inside and outside (a star on the spire, bas-reliefs of Lenin and Marx) were demolished. 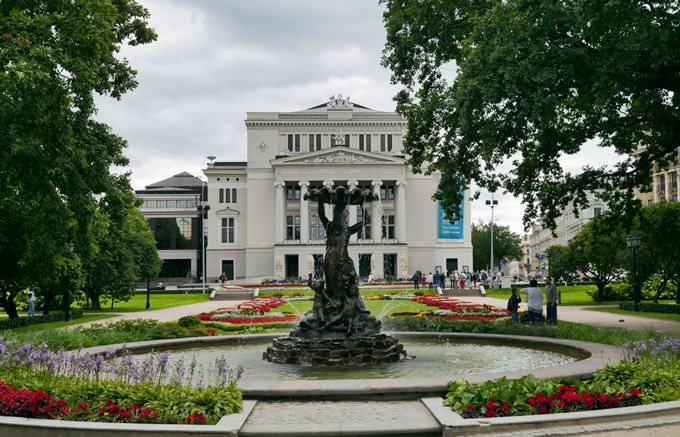 Interesting facts:
» Originally, the building of the Latvian National Opera served as the first theatre in the city. It was named “German Theatre”. The construction project was approved by Emperor Alexander II in 1860.
» It was officially opened in 1863. Not only German, but also French and Russian operas were staged here. Plays were staged only in German.
» Over the years of its existence, the theatre was burned three times. In 1882, after the first fire caused by a gas stove, the first steam electric station that provided electricity for lighting in the theatre was built.
» In1919, the theatre passed to the Latvian National Opera. In the 1930s, Chaliapin, Sobinov, and Karsavina appeared at the theatre.
» In different years, such famous performers, as Maris Liepa, Michael Baryshnikov, A. Godunov, and opera singers Elina Garanca, Maya Kovalevskaya, and Kristine Opolais performed.
» In 2015, M. Baryshnikov who was born and started his career in Riga, came to Latvia to participate in the performance “Brodsky/Baryshnikov” by Alvis Hermanis.
» In 1987, Andrei Mironov did not finish his last play on the stage of the Latvian National Opera. 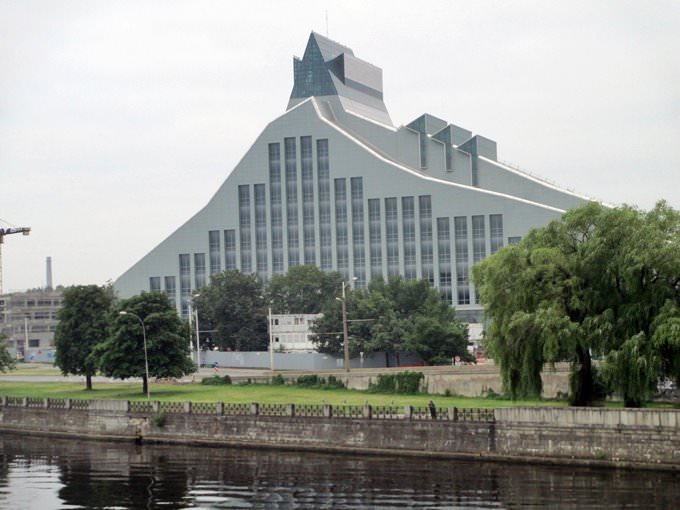 Interesting facts:
» The National Library that is also known as the House of Light was opened in Latvia in 2014. It was preceded by a long preparatory period.
» Multiple competitions for library projects ended with the victory of Gunars Birkerts who agreed to work for free. This project was appreciated by UNESCO.
» The building was being built intermittently from 2006 to 2014 due to a lack of funds. The National Library was the most expensive building of such type in the world.
» In the House of Light, rich cultural heritage is kept. The library houses 6 million books in 50 languages.
» There is also the big collection of Latvian folk songs that is a cultural heritage too. This collection is among Cultural Objects at UNESCO.
» In the library, a lot of conferences, exhibitions, and concerts are held. There are a cafe and a restaurant. Everyone can go on an excursion in the library and use other services.

Interesting facts: » The Powder Tower is the only medieval fortress that has been survived to the present day. There were 28 towers with different names at one time. The Powder Tower was first mentioned in the chronicles of 1330.
» In 1856, Governor-General A. A. Suvorov-Rymniksky (the grandson of General Suvorov) ordered to extend and renovate the city. Due to this, it was decided to demolish old buildings. Only the Powder Tower was left because it was a historical monument.
» It had not been used for some time. Only in 1892, it passed to the Polytechnic College. The students restored it and used it as a fencing arena, a dance room, and a pub.
» After the First World War, the tower started to serve as a museum. First, the Latvian Shooters Museum was founded. Then, the Military Museum was opened.
» In 1938, the tower was reconstructed. The Riga Nakhimov Naval School was established here.
» In 1957, the Soviet authorities opened here the October Revolution Museum. When Latvia seceded from the USSR in 1991, the Military Museum was opened here again. Today, it is open to visitors. Here, you can learn about the history of the country. 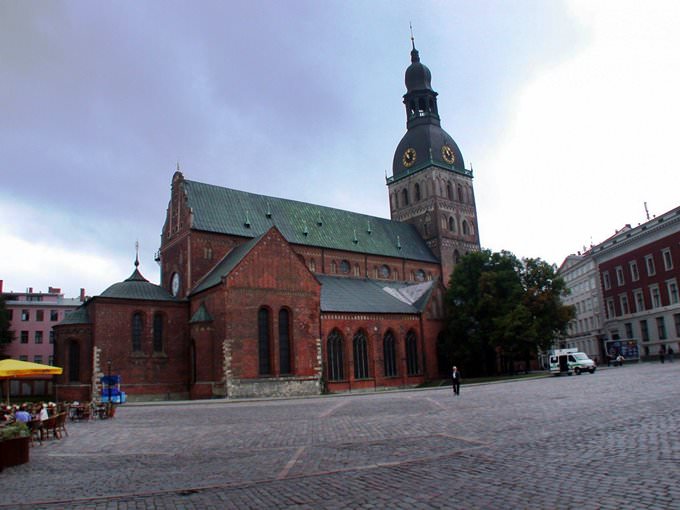 Interesting facts:
» Riga Cathedral is one of the oldest attractions in Riga and all the Baltic States. Rigas Domes is translated from Latin as “The House of God”.
» The first stone was solemnly laid on 25 June 1211. This ceremony was visited by the first bishop Albert von Buxthoeven. The construction of the cathedral was completed in 1270. Over the centuries, the cathedral had been destroyed and reconstructed many times, so its exterior combines features of different architectural styles.
» In 1959, an altar was placed here and the cathedral hall was turned into a concert hall with rows of seats.
» The main attraction of the cathedral, the organ, was changed several times. In 1883-1884, the musical instrument made in the late 16th century was replaced. It was the biggest organ in the world. The organ had artistic value because its decorative body carved in 1599-1601 had been preserved.
» Then, the organ was restored in 1981-1984. A new musical instrument was placed in the old body.
» Nowadays, services alternate with organ concerts.
» Riga Cathedral is also the subject of paintings painted by Nicholas Roerich in 1903. 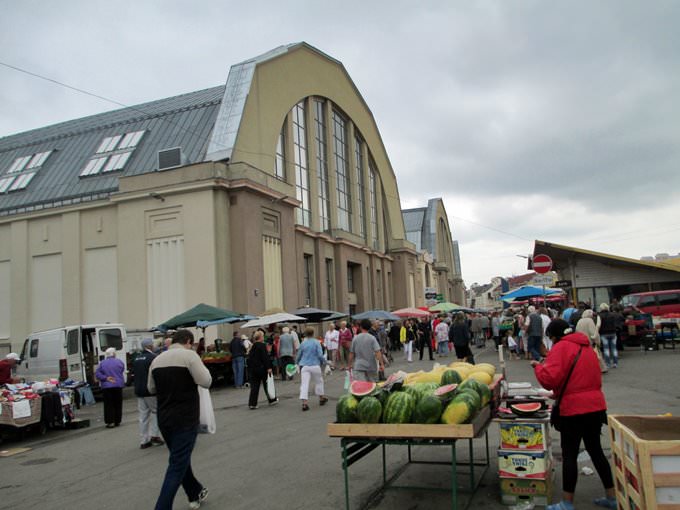 Interesting facts:
» Riga Central Market is one of the biggest markets in Europe. Its total area is about 6 hectares.
» The market consists of five unusual pavilions. In 1992, the city authorities decided to build a central food market. They bought hangars for airships left by German soldiers after the First World War.
» The market construction was started in 1924 and completed in 1930.
» The citizens were proud of a new spacious, bright, and modern market. Peasants sold their products here.
» In 1940, the conception of the market changed. Only state-owned and cooperative companies could trade here. Products were more expensive in the market than in stores. Peasants were not permitted to trade in pavilions.
» Today, Riga Central Market is the most popular tourist place in Latvia. 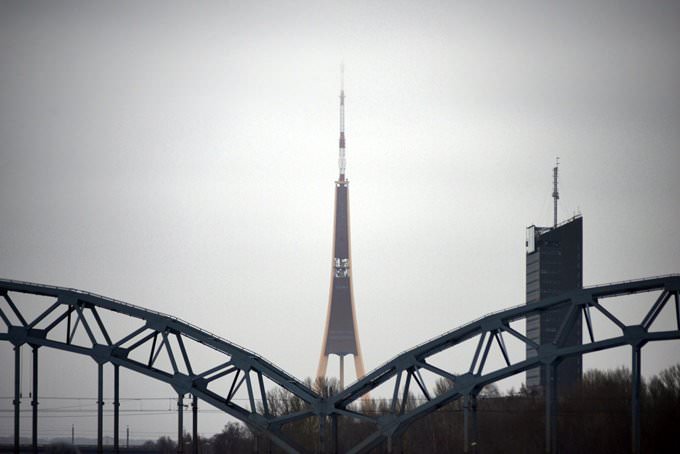 Interesting facts:
» The Riga Radio and TV Tower was built in the middle of the river on Hare Island. The tower was built in two stages. The construction lasted 10 years, from 1979 to 1989.
» The entire country participated in the construction. Metal was smelted in Ukraine, the frame was constructed in Chelyabinsk, installation works were performed by the Leningrad people.
» It is the highest tower in the Baltic countries. It is 368 m high.
» There is an observation platform at a height of 97 m. The other platform was constructed at a height of 134 m for high-ranking guests. The local designer added extraordinary furniture. Today, it is not used.
» The tower is supported by three pillars. There are lifts. Two of them move on inclined rails. The third lift is used by visitors.
» The TV Tower put has been put into operation for 250 years. It can withstand 7.5 magnitude earthquakes and a wind speed of 44 m/s.

Interesting facts: » St. James Cathedral was allegedly founded in 1225.
» Over the years of its existence, the church has changed religion four times. Now, it is the most important Catholic cathedral in Riga.
» The church is crowned by an 80-meter pyramidal tower that was built in 1755 and has survived to the present day. The top of the tower is decorated with a weathercock.
» In the church, old gravestones with blurred inscriptions are walled up but there are no tombs.
» There are also two rare exhibits: a wooden sculpture made in the 14th century and a fragment of the painting on the wall.
» In 1819, serfdom was abolished in Livonia exactly in this church.
» As for the modern interior of the cathedral, broken beds with fresh flowers and plants.

Interesting facts: » The Virgin of Anguish Church is a white and blue building in Riga. Over the years of its history, it had been reconstructed many times.
» The first stone church was built in 1765. It was the only Catholic church in the city.
» In 1780, Archduke Joseph II, the Emperor of the Roman Empire, visited Riga and the Virgin of Anguish Church when he traveled to Saint Petersburg. He was saddened by the plainness and disrepair of the temple.
» The Emperor made a substantial donation to it. The last King of the Polish-Lithuanian Commonwealth Stanislaw Poniatowski and the future Emperor of Russia Paul, the son of Catherine II made a contribution too. A new church was built in 1783-1785.
» The building was reconstructed when Nicholas I visited it in 1854 and acknowledged that the church really needed to be extended.
» It was last renovated in 1895. Since that time, the church has always been open to visitors. It passed through wars and the Soviet period.
» Remarkably, in the film “Seventeen Moments of Spring”, you can see shots with Our Lady of Anguish Square and Church. In this episode, Professor Pleischner is going to a safe house.

This article about architectural landmarks and sights of Latvia is protected by the copyright law. You can re-use the content, but only under the condition of placement of an active link to www.orangesmile.com.
Latvia guide chapters 1 2 3 4 5 6 7 8 9 10 11 12 13 14

What to see in top cities of Latvia

Riga
It is always interesting to visit Kalnciema kvartals regardless of the season. Every week, exciting events and concerts dedicated to the national culture take place in this district. Kalnciema kvartals looks more like a large and gorgeous country house. Swings attached to an old apple tree, fragrant rye bread, colorful souvenir shops, and national restaurants – it is so easy to spend a whole day there. If you like modern art, don’t forget to make a walk to Andrejsala district. There are … Read more

Map of city guides for Latvia