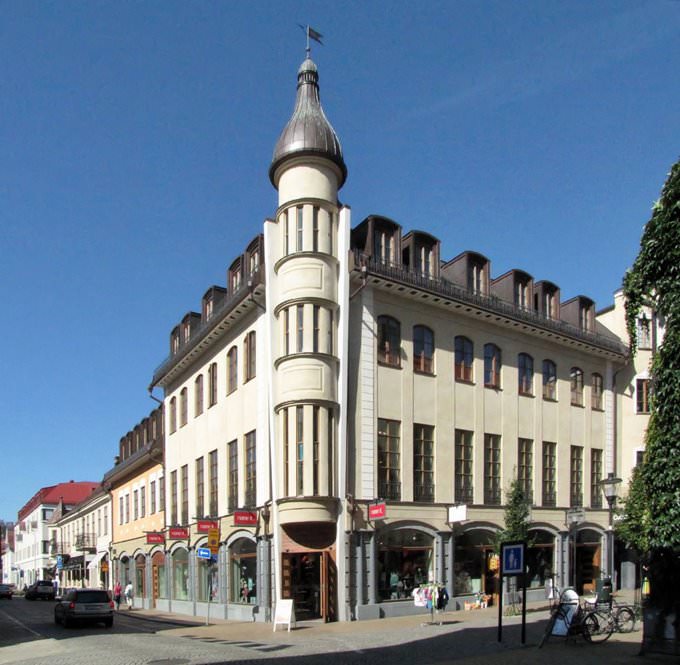 Kristianstad is famous for its unique historical monuments that can be found here literally at every step. In the very heart of the city is the beautiful Heliga Trefaldighetskyrkan, which is considered one of the most beautiful Protestant churches in Europe. Its construction was initiated by Christian IV of Denmark during the Renaissance. Some of the most valuable materials were used for the construction of the temple, special attention was paid to the decoration of its facade.
Shopping in Kristianstad - main shopping streets, outlets and boutiques
Kristianstad’s busiest shopping area is Handelsstaden Kristianstad. Here, among the winding historic streets, you can find a lot of interesting clothing stores, souvenir shops, cozy …

Open
Even now you can see the preserved royal monograms on it. Another characteristic of the building is high windows. In total there are 26 of them, thanks to the windows all the inner space is flooded with natural light in the daytime. The height of the old church tower is 53 meters, which makes it visible from many city streets. The interior of the church is also striking in its splendor. It has preserved beautiful sculptures, stucco elements, as well as religious artifacts brought here several hundred years ago.
No less interesting historical site is the Backaskogs Castle dating back to the 13th century. It is noteworthy that this unassailable building was originally occupied by a monastery. After some time, the large-scale building has passed into the possession of Charles XI of Sweden who converted it into his residence. Throughout hundreds of years, the castle has changed many famous owners. Copyright www.orangesmile.com
Guide to Kristianstad sightseeing - things to see and to visit
Kristianstadt is a city in the southern part of Sweden. It is located in the mouth of the Helge River on the north of Hammarsjön Island. The city is the administrative center of …

Open
The historic castle is now in private ownership, in 1956 the owners decided to make it available for cultural events and tours. Today, the restored castle hosts conferences and lectures, as well as regular guided tours. A very beautiful landscaped garden is formed around the castle. In summer, it often becomes the venue for wedding ceremonies. 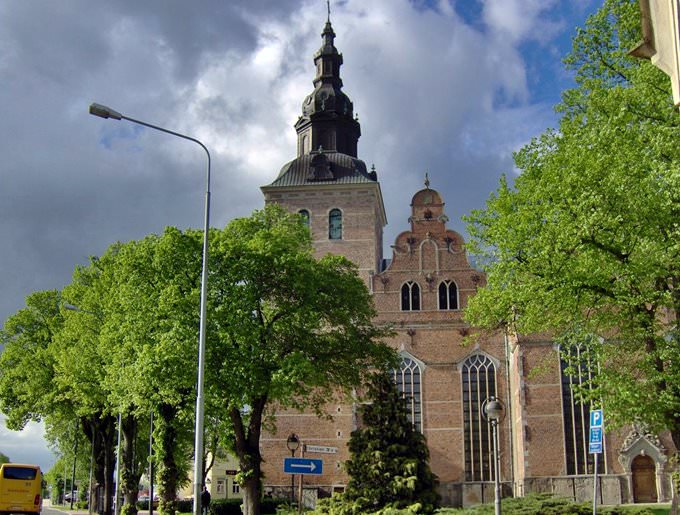 The largest cultural center of Kristianstad is the Regionmuseet Kristianstad. It is a museum complex of several different buildings, each one keeps thematic collections of exhibits. The Regionmuseet is dedicated to the history and culture of Skåne County, its collection of archaeological finds is among the most interesting parts. The museum is also storing antiquities and works of art, a special pride is the collection of ancient weapons and national costumes.
OrangeSmile.com recommends best hotels in Kristianstad Hotel Bishops Arms, Rating 8,1
Family holidays with kids in Kristianstad. How to entertain your child, things to show to children.
Traveling to the Swedish city of Kristianstad together with kids is a great idea for a family vacation. It has all the conditions for a family pastime to be remembered for a long time and …

Open
In 1972, a new branch was opened on the museum’s site - the Kristianstad Film Museum. A symbolic monument to the cameraman was installed in front of the entrance. This museum also boasts a unique collection of exhibits. Here you can see costumes of well-known film characters, film sets and props, which were used for the filming of many famous scenes. 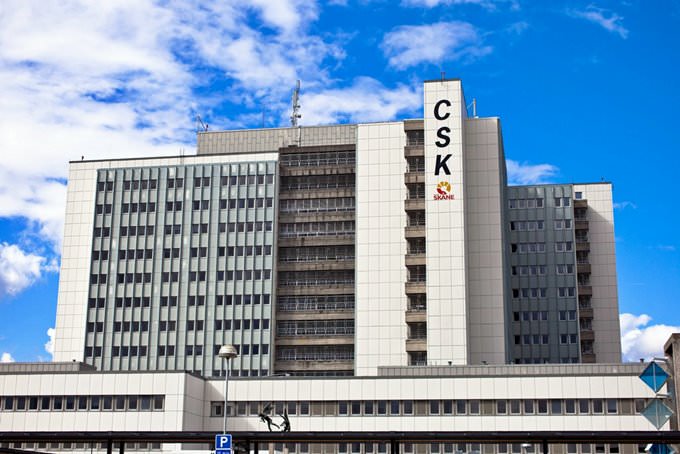 Kristianstad Theater occupies a majestic historic building, which stands on the territory of the main city park. It regularly hosts theatrical performances of various styles. Besides, the city's main stage is often used for holding musical concerts. Near the theater is a beautiful old mansion built in 1886. It has been under private ownership for a long time, and now an original musical cafe is open within its walls. Here you can enjoy not only the signature desserts but also famous musicians' performances.
Cuisine of Kristianstad for gourmet with top restaurants and cafe
The local cuisine is rich in unusual traditions that may seem quite original to foreign guests. For many years, meat dishes have been the basis of the regional cuisine. Here they prepare …

Open
Some city hotels have long acquired the status of popular attractions too. The reason is beautiful historic buildings they are housed in. On one of the central city streets, you will find Stadshotellet Kristianstad whose building dates back to the 19th century. It has managed to preserve its original architecture, the building still has tall, narrow windows and beautiful facade decoration. Guests can appreciate the unique interior design featuring a lot of original elements, and a restaurant & bar on the hotel's ground floor is available to absolutely everyone. 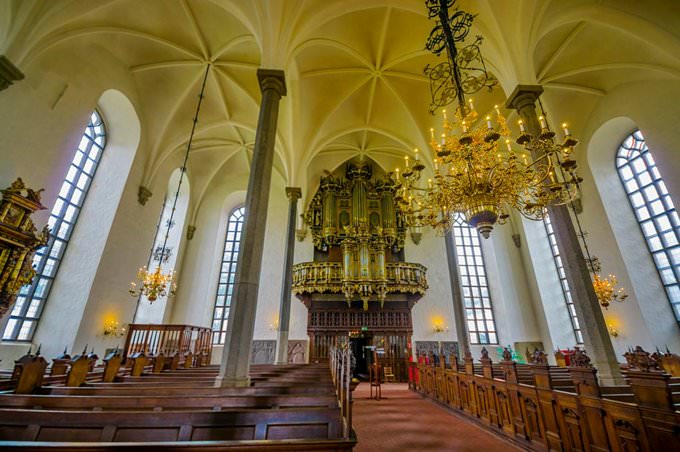 A building of the fashionable First Hotel Kristian IV is considered one of the most beautiful in Sweden. Originally, this large building with a richly decorated facade housed a bank, and after it was decided to reorganize it into a prestigious hotel. This building has wonderful arches and rounded windows, a beautiful tiled roof and many turrets that make it look incredibly refined. The building is quite large but still does not look bulky or heavy. Guests of this unique hotel will have a chance to appreciate its interior decoration features. It has preserved both high vaulted ceilings and ancient staircases, and in some rooms, it was possible to preserve old fireplaces.

This guide to cultural sights Kristianstad is protected by the copyright law. You can re-publish this content with mandatory attribution: direct and active hyperlink to www.orangesmile.com.
Kristianstad - guide chapters 1 2 3 4 5 6 7 8
Reference information
Map of all palaces

Public palaces near Kristianstad
♥   Palace 'Trolle-Ljungby Castle' , 14.8 km from the center. On the map

Photogallery of cultural heritage of Kristianstad

Excursions over cultural sights of neighbours of Kristianstad

Malmo
A few beautiful buildings are located around the ancient Lilla Torg square. These were built in the 17th – 18th centuries. The characteristic feature of the buildings of that period is fancy turrets. Such turrets are decorating almost every building set in the neighborhood of the square. The oldest building of the city is considered to be St. Peter’s Church which was ... Open »
Copenhagen
The suburban area of Copenhagen is the location of one more famous sight - The open air museum. It covers the square of almost 30 hectares and features models of old fishing houses, windmills and other farm buildings. The museum complex is equipped with a restaurant, the menu of which is full of dishes of national cuisine. The decoration of the restaurant is also "antique". ... Open »
Kalmar
The Öland Bridge is one more famous symbol of Kalmar. This is the longest bridge in Sweden. The length of the bridge is 6,000 meters, and its height reaches 40 meters in the middle. The height is not random – the bridge was constructed in a way to make sure that ships can sail without any trouble. This motorway bridge connects Kalmar with Färjestaden on Öland Island. The ... Open »
Goteborg
Kronhuset is the oldest building in the city that has managed to survive till our days. The construction of the building was completed in 1643. Initially the building was intended to become an artillery arsenal. The building of East India Company was built several years later. It also has managed to survive in its original form till our days. Currently the large-scale building ... Open »
Odense
A single touch to the walls of the church is considered to be curing and healing from all diseases and miseries. The church is visited by people of different religious confessions. A significant symbol of the city is so called half-timbered houses. These traditional medieval buildings are still constructed following good old traditions. The half timbered houses will be ... Open »

Culture guide to Kristianstad. Which fascinating sights to visit once you are in Kristianstad: temples, churches, museums, theaters and castles. Recommendations (with addresses, phone numbers and links) on the places 'must visit' in Kristianstad. Plan your own city excursion by using this page info!