The cultural capital of Indonesia - Jakarta – never ceases to attract travelers by dozens of iconic architectural and cultural landmarks. Istiqlal Mosque, National Monument, Cathedral Jakarta, and Museum Bank Indonesia is, by far, not the complete collection of objects of interest. In this review, we will try to include descriptions of the most important architectural landmarks of Jakarta. We accompany them with interesting facts, colorful photographs, and 3D virtual tours. These 3D tours allow you observing the landmarks from a bird’s eye view. Simply turn on the HD video and enjoy the flight! 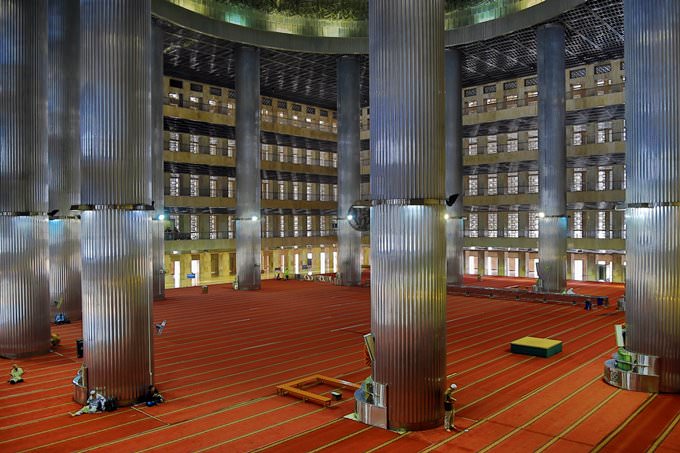 Facts:
» The Arabic name of the mosque is “independence”. It gained its name in commemoration of freedom from Dutch domination.
» Masjid Istiqlal was built at the site of the former fortification in the middle of the 19th century. In 1955, the contest on design projects was won by a Christian architect.
» The construction lasted 17 years. The new building was officially built in 1978. It accommodates up to 120 thousand people.
» The main building has a semicircular dome with a diameter of 45 m. It is crowned with a spire in the shape of the crescent with a star. 12 columns uphold the vault.
» In the Prayer Hall, there are three-tier balconies upheld by the columns. The mosque is two rectangular constructions of different size.
» It’s spacious inside and there are no unnecessary things. The columns end with aluminum plates.
» There is an arch niche upheld by the columns in the central wall. The imam usually sits in it when he prays. Sermons are preached from the tribune.
» On steel construction, the names of Allah and Muhammad are written in Arabic. The total area of the entire space is 10 hectares. The minaret is almost 100 meters high. The facade of the building is made of marble and stainless steel. 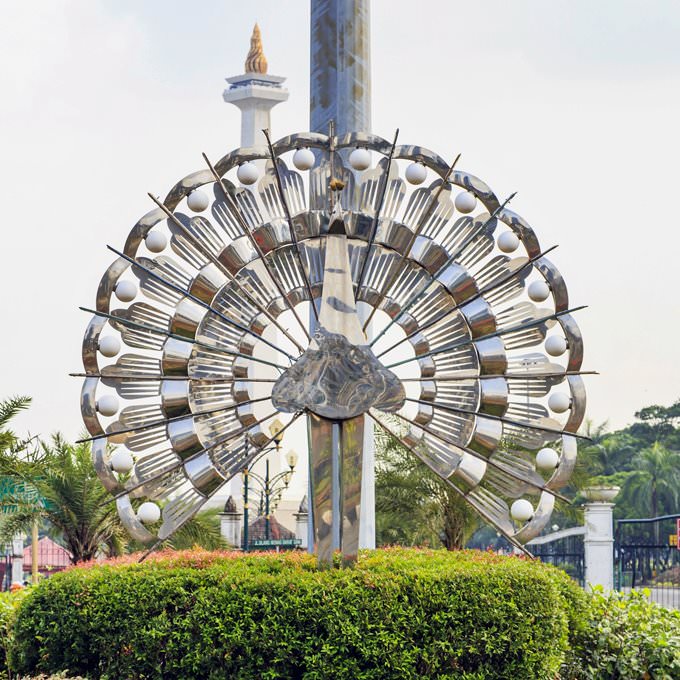 Facts:
» 132-meter tower in Jakarta is named the National Monument. The construction began in 1961 and included 2 stages. Its framework consists of 284 piles. The obelisk was finished in 1975.
» The construction consists of big stone blocks. It ends with the observation platform that has a panoramic view of the city. It is necessary to cross 115 m by lift from the ground to the observation platform. The total area of the platform is 45 m2.
» Its top is crowned with the installation in the shape of the flame covered with gold. It weighs 33 kg. The torch is made of bronze. There are lift motors hidden inside the item. The monument represents the country’s struggle for independence.
» There is a museum in the underground part of the construction. 50 paintings in the shape of the semicircular tape depict historic events taking place in the country. There is a comfortable park around the stele.
» There is a pool cooling the air-conditioning system near the tower. The locals call the National Monument “Monas” as a reminder of the masculine and feminine.
» There are many halls in it. Relief patterns of historic events are carved on the walls. The original document of the country’s independence and state symbols are kept here. The facade is tiled with Italian marble. 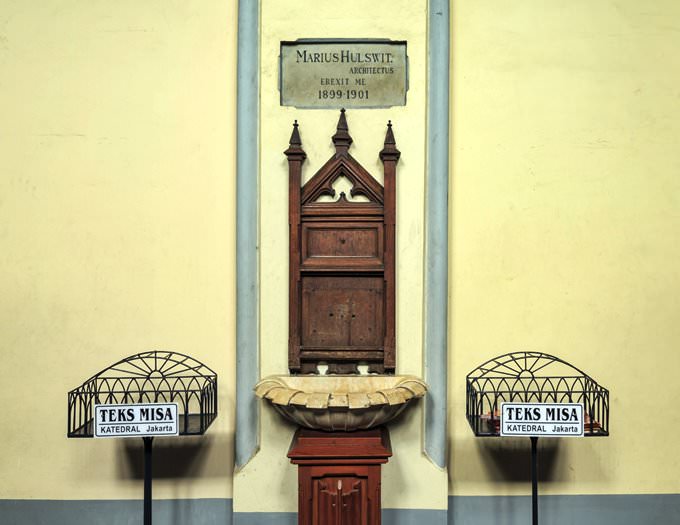 Facts:
» There is a two-storied cathedral church at the site of the old chapel (1825). It was blessed in 1901. The building was reconstructed twice. It was last restored in 2002.
» The temple resembles a cross with its exterior. It consists of red brick and wooden constructions. The walls are faced with plaster with patterns.
» There is a central entrance on the west side. The main portal is decorated with the statue of the Virgin Mary (it causes the official name of the cathedral; the locals name it Gareja).
» There is a colorful window in the shape of the rose (Rosa Mystica) above the sculpture. This type of glass with a unique design represents the Mother of God. There are lines in Latin above it.
» The construction is crowned with 3 carved spires. Two high 60-meter spires are installed at the side of it. The 45-meter edge decorates the eastern part of the building.
» There is a tower from the southern side where the old clock is located. At the second level, there is a museum dedicated to the history of the Catholic Church.
» Religious rites are accompanied with organ music and church choirs. The organ was delivered from Belgium in 1988. The hall has such miraculous acoustics due to the high ceiling and its arches. 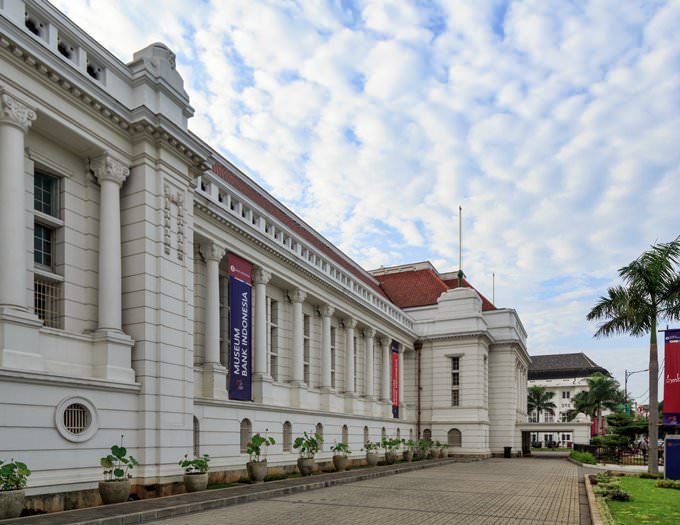 Facts:
» In the historic building, there is one of the modern museums, Museum Bank Indonesia. Its total area is 10 thousand m2. It was officially opened by the President in July 2009.
» In the building, you can see collectible coins and paper money, as well as the money of ancient Indonesian countries. They represent the history of the local currency and the situation in the banking sector of the country.
» There are over 60 thousand exhibits. 5 000 items were found during archaeological expeditions in Indonesia.
» The Museum also houses the data on the banking system of the country from the time of the arrival of European colonists to the current system enacted in 1953.
» You can touch interesting interactive exhibits here. Clients can also watch the film of a particular genre. Collections are divided up according to themes: stone sculptures and the treasure room.
» There are two dolls of soldiers at the entrance. You can see the dummies of bank officers in every showroom.
» In one of the rooms, you can see books that weigh 20 and 28 kg. Financial transactions were inked in these books. 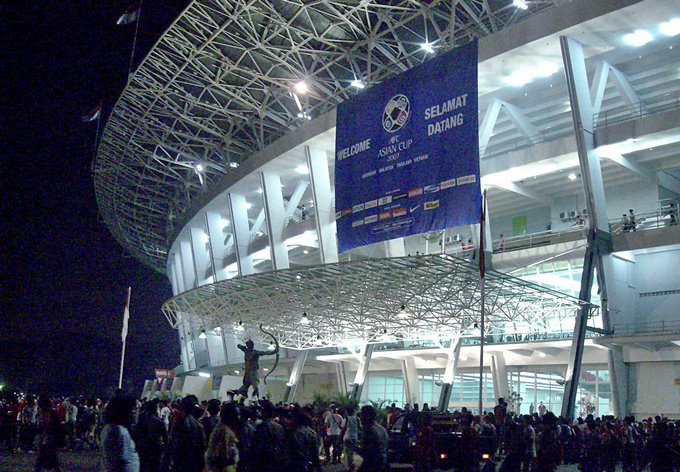 Facts:
» In 1962, the Asian Games were held here. The multi-sport stadium was built in Jakarta in conjunction with this event. The USSR provided huge support to that. It was finished in 1960.
» It accommodates over 100 thousand visitors. It was reconstructed several times. After the last reconstruction, the number of seats declined (99 thousand seats).
» In 2007, the Asian Football Championship was held here. 8 matches of the tournament, including the final match of the championship, were held here.
» Today, it is one of the busiest stadiums. It is the 21st stadium among the largest sports grounds.
» The arena was named Bung Karno after the first elected Head of Indonesia. Festive events, concerts, and other entertainment events are held at the Bung Karno Stadium.
» The territory of the Karno Stadium is surrounded by green plantings. People can easily jog here during the evening hours because the surroundings are illuminated.
»  For safety reasons, it is impossible to get to the stadium when competitions are not held. Significant sports events are held at the stadium.
» It has a big dome to protect it from the bad weather and heat. Facts: » Wisma 46 is a skyscraper in Jakarta. It was built in 1996. 46 is the number of floors, apart from two underground levels for car parking. The entire area of the building is 140 m2. The construction is 200 m high and the curved spire is 62 meters high.
» The facade of the building is made of granite and glass. It is mostly white and blue. Wisma resembles a vertical post with blue windows.
» There is a glass tower at its bottom. The rectangular concrete construction includes a curved spire. The construction is open on both sides. The whole construction gives the impression that you see a high wave.
» Such an architectural style characterizes the modern and postmodern style that uses curved lines of the main facade. When it was being constructed, new materials and up-to-date technologies were used. The shape and color of the construction blends into the surroundings harmoniously.
» Visitors are served by 23 high-speed lifts (360 m per minute). The construction cost 132 million dollars.
» There is a business center in the territory of the shopping mall KotaBIN. Most of its rooms are rented by banks, offices of international companies, stores, and entertainment venues.

This guide to architectural sightseeing in Jakarta is protected by the copyright law. You can re-publish this content with mandatory attribution: direct and active hyperlink to www.orangesmile.com.
Jakarta - guide chapters 1 2 3 4 5 6 7 8 9 10

Build your walking routes in Jakarta on the landmark map

Architectural landmarks in the regions around Jakarta

Singapore
The Singapore Flyer reaches a height of 55-storey building with a total height of 165 m. The Singapore Flyer is 30 m higher than the London Eye. The Singapore Flyer has been the world's tallest Ferris wheel until March 2014, when Las Vegas ride was put in action. It’s 2 meters higher than the Singapore Flyer. The wheel diameter is 150 m. The wheel itself is embedded in a three-story terminal building housing shops, bars and restaurants. ... Open »
Kuala Lumpur
The Petronas Towers are the highest twin towers in the world. They have 88 floors and are 452 m high. According to the project, the buildings feature a huge size and a complicated structure. Their foundation is 100 m beneath the ground and is the deepest in the world. The towers are connected by a glass bridge that is situated at a height of 170 m. There is also an observation platform. As the towers swing, the bridge joint with ball bearings ... Open »
Bangkok
The Grand Palace is the Bangkok's most famous landmark. The palace consists of several buildings, occupying an area of 218 thousand m2 and is surrounded by four walls of 2 km long. The Grand Palace served as the residence of the Kings of Thailand. Its construction began during the reign of King Rama I in 1782. There are various government offices, temples and the Royal Library in the palace. In addition, many galleries of the palace are ... Open »
Hanoi
The Hanoi Cathedral of St. Joseph was built in 1886 on the site of a very ancient and ruined Buddhist pagoda. The the vicar of the church, Paul Francois Puginiier, petitioned the construction of the Catholic church in front of the French administration. The cathedral was built in two years. It resembles the French Cathedral of Our Lady of Paris. Two bell-towers 31 m high are equipped with five bells each. A very beautiful interior is ... Open »
Hong Kong
It’s a modern memorial built in 1993 in the form of a large seated statue of Buddha that is 34 metres high and weighs 250 tons. To get to the statue, you need to climb 268 steps. There’s a temple inside. The first floor decorated with paintings of the Buddha’s earthly life houses the Hall of Benevolent Merit. The second floor has a wooden panel depicting 160 pairs of eyes conveying different human emotions. The third floor houses the Hall ... Open »
OrangeSmile.com - online travel reservation expert providing reliable car rental and hotel booking services. We feature more than 25.000 destinations with 12.000 rental offices and 200.000 hotels worldwide.
Secure Server