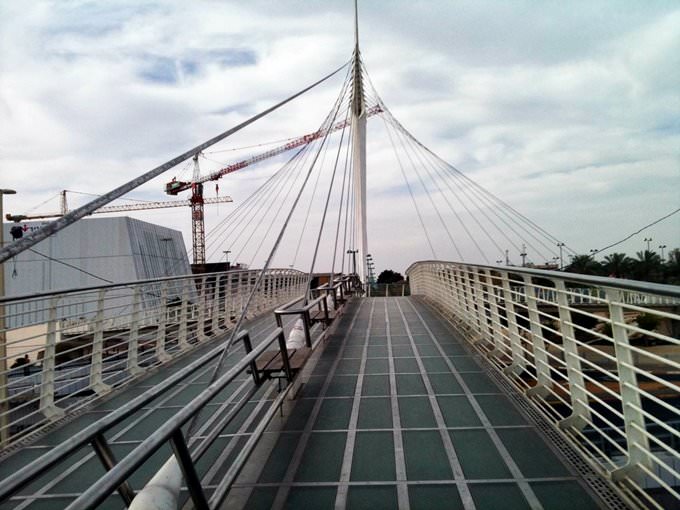 The traditional cuisine of Israel owes its diversity to immigrants. The credit for this variety and richness is due to the recipes brought from different countries of the world, combined with local culinary traditions, while also not forgetting the influence of the Middle East. Israel’s cuisine is distinguished by an abundance of greenery, fresh vegetables, fruits, beans and dairy products. It is divided into two categories: Ashkenazi food (similar to that of Hungarian and Polish Jews) and Sephardic cuisine (pungent and spicy dishes typical of the Middle East). Hummus (chicken peas puree with garlic and lemon juice) and “Falafel” (balls made from peas and beans) were adopted from the Arabs. Today, Falafel is one type of Israelis fast food.
Unique sights of Israel from our series 'Extreme places on Earth'
These spots really worth the attention of a real traveler-researcher. …
Read further
The Israelis strictly observe the law “Kashrut” which determines the food that is suitable for consumption. This law is adhered to by the local population and catering establishments. One of the main provisions of the law is separate storage, preparation and supply of meat and milk. Non-smoked products include pork and scaly fish. Eating of Black Beluga caviar (but not red salmon) and poultry meat (chickens, ducks, geese, quails and pigeons) is allowed. Kashrut also regulates the drinking of wines whose kosher status depends on the conditions of their production. Today in individual hotels and establishments that are popular among tourists, you can try the cuisine of different countries regardless of the occasion.
Salads enjoy a huge popularity in Israel. They are eaten for breakfast, lunch and dinner. Classic local salad consists of lettuce leaves, boiled eggs and bread. For keeping your energy levels up, you can have yogurt or cottage cheese. At lunchtime, the meal is complemented with a side dish usually in the form of fried potatoes or puree from turkey peas. Another popular salad recipe is a combination of fresh cucumbers and tomatoes, seasoned with a mixture of vegetable oil and lemon juice with salt and pepper. Another recipe of salad involves combining cubes of paprika, cabbage straws, grated carrots, ginger shavings or fennel. Fried eggplants are used in preparing many dishes. They are seasoned with mayonnaise sauce or yogurt and combined with “Feta” cheese. Sesame paste “Tahini”, garlic or onion, herbs and spices are added to the salad “baba ganoush”. Copyright www.orangesmile.com
Top architectural sights of Israel
Monuments and architectural objects, notable for the history and culture of the country. …
Read further
One of the most delicious snacks is “Meze”. These include vegetable snacks: pickled gherkins “Hummus”, “Tahini” pasta, and caviar. In the modern form of “Meze”, there is an unusual combination of pistachio with fennel, beets with pomegranate, and celery with the cheese “Kashkaval”. Another favorite Israeli dish is “Shakshouka” – eggs poached in tomato sauce with the addition of a variety of ingredients and herbs. It is usually eaten with bread straight out from a frying pan. Also very common are; grape leaves filled with rice and meat mixture, artichoke with meat, and fried or baked “Cigars” with meat stuffing.

Israelis are very big fans of liquid food. One of the basic dishes of their national cuisine is chicken soup with celery, fennel or cilantro. The Sephardim cook soups with rice cereals or pasta “Orzo”, lemon, mint and coriander, while noodles are used by the Ashkenazim. Lentil soup, meat “Harira” with rice and beans, wedding “Flute” on the cerebral bones are also popular. The most preferred types of meat for soups and other dishes are chicken and turkey. They are served baked or in the form of a tefteli with tomato sauce “Albondigas”. The most common meat dish is “Meorav Yerushalmi” prepared from chicken breast and offal. The ready-made dish is laid out in a bread bowl – “Piita”. Fish is commonly cooked on a grate or coals, fried, baked with vegetables and served with different sauces.
Israel sightseeing - top places to visit
Israel is not only a beautiful country that attracts tourists and pilgrims of different religions, but also home to some greatest sanctuaries in the …
Read further
A culture of homemade cakes was adopted in Israel. Delicious locally made snacks can be tried in “confectioneries”. First of all, these are different variants of pies: the “buzbus” mannish, manno-nut “Tishpishti”, sweet “revani”, and pies with apples or dates. The peppered sugar pudding “Jerusalem Kugel”, poppy seed buns “Hamantaschen”, spicy “Burekas” and doughnuts with red jelly “Sufganiyot”, all possess elegant tastes. Pastries are washed down with tea or coffee. The intriguing “Sahlab” is a drink with cinnamon and pistachios. It resembles pudding in consistency. In Israel, local beers (“Negev”, “Maccabee”) and wines (“Carmel”, “Tishbi”) are very popular. Classic dishes of Jewish cuisine can be enjoyed at fast food outlets, snack bars, cafes and restaurants.

This article about national cuisine of Israel is protected by the copyright law. You can re-use the content, but only under the condition of placement of an active link to www.orangesmile.com.
Israel guide chapters 1 2 3 4 5 6 7 8 9 10 11 12 Cuisine and restaurants in popular cities of Israel

Tel Aviv
The Bertie restaurant is popular among young travelers; it features a large selection of fish and meat treats. Visitors are recommended to taste grilled lamb and branded mussels and complement a dinner with exotic cocktails. Shila is an interesting restaurant serving exotic seafood platters. Beautifully decorated fish dishes, shrimp with special sauce, scallops and rice with seafood are complemented with fresh salads. It is worth noting that in the evening the restaurant is always visited by … Read more

Jerusalem
Ima restaurant dedicated to the national cuisine is an equally attractive place. The choice of meat delicacies and delicious side dishes is simply huge here. Prices for food are also very attractive - a complete dinner will cost visitors around 80 shekels. In Jerusalem tourists will find eating places of different culinary trends. Masaryk restaurant is a very famous destination for food connoisseurs. It specializes in Italian cuisine. In addition to delicious pasta with traditional sauces, … Read more

Haifa
The Alhambra restaurant is an interesting dining place; it specializes in dishes of national cuisine too. The attractive restaurant has a bar, which represents a decent selection of beers and typical American snacks. Another unique place is Duke - it's a real Irish pub located in a very scenic area. Despite the specificity, the pub has very calm and relaxing atmosphere. Every day regulars gather at Duke to drink a glass of their favorite beer and enjoy specialties of duck. Seafood lovers will … Read more